You are here: Home » Silent Forest 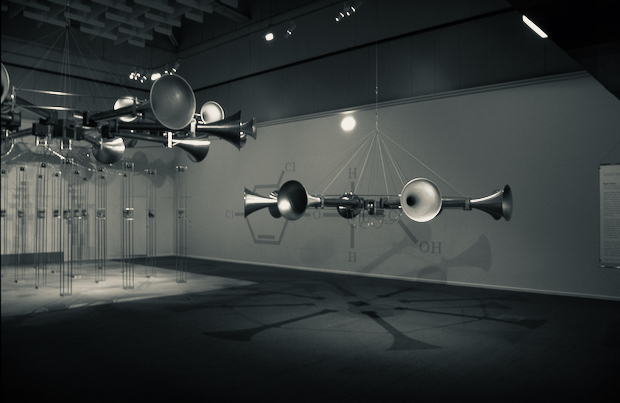 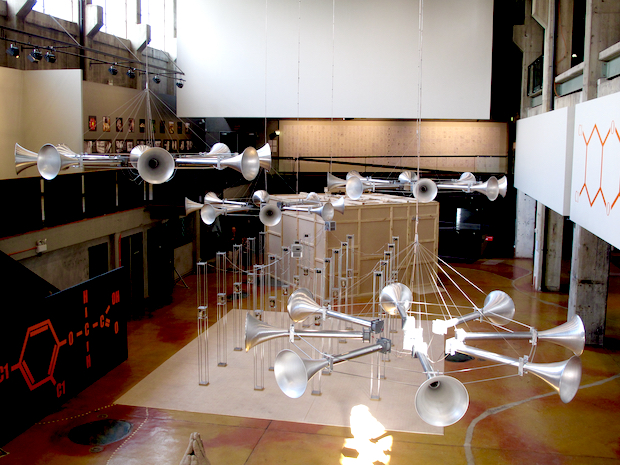 Notes.
Silent Forest forms a part of the Silent Zones series (which includes; Big Bell Beta; An Unrequited Space and La Zona del Silencio) these are works which are typically located in a compact of both physical and intangible sites and are manifest by hybrid combinations of media which operate within a variety of temporal domains. Each of the works from the Silent Zones series address historical, ideological and ecological sites of silence and/or silencing. In this context silence has both a physiological and metaphorical weight – the silences created by political and economic processes operate in concert with the qualitative silences of physical locations, and are juxtaposed with the incommensurability, which exist at the margins of culture, language and gender. 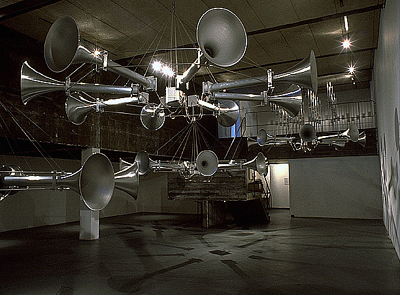 Conceptually the series engages as a hinge between embodiment and disembodiment as proposed by the telecommunication of material/cultural events. The enigma of describing the tangible (phenomenal) through the organs of transmission is a central feature of the paradoxical logic that we accept on a daily basis (the telephone, radio, television and telematics). My interest as an artist is to explore our habitual suspension of disbelief which these technologies demand, with research which parallels and inverts this enigma – to pursue the definition, locus and function of silence and silencing is an exhumation of structure beneath the sedimentary layers of surface noise. 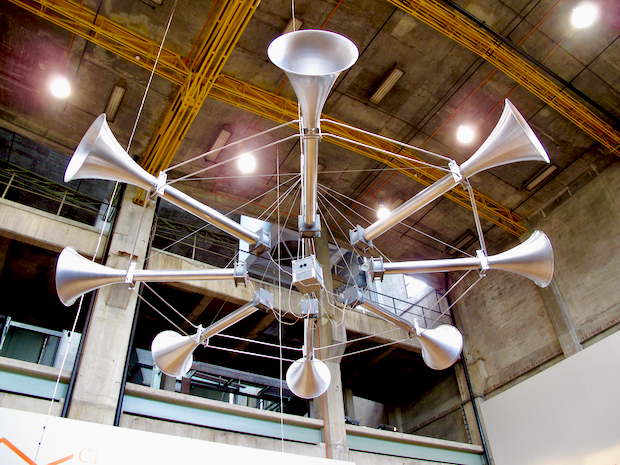 In effect the work moves in contra-distinction to the accepted role of the broadcast media, those duty it is to turn the tangible and local into a diffusion of ethereal signs. My intention is to seek out (perhaps using sonar) and materialise those interstitial ‘silent’ spaces which are overlooked or resistant to articulation. As such, this serial project seeks to examine the disjunctions and dislocations that we experience on a temporal and spatial plane when we are confronted by the slippage between experience and electronic representations of experience – or indeed the wholesale substitution of visceral experience by electronic signage. 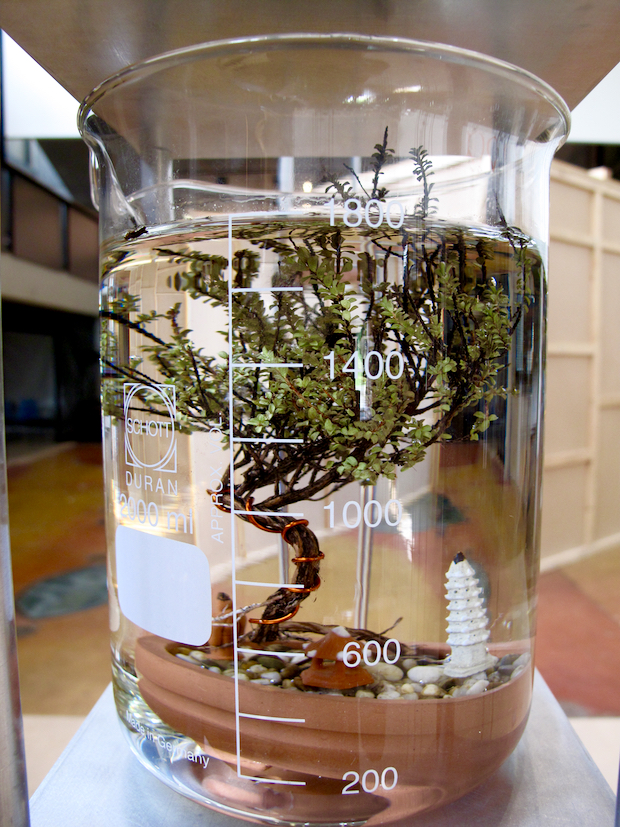 Fundamentally these works operate as a hinge that links our quotidian life (humbly played out in Cartesian space and conscious only of Newtonian physics) with a Quantenlogik (operating in the collapsed Spatio-temporal domain, the demon of speedspace which Paul Virillio struggles to describe). We are (as ever) on the cusp of a paradigm shift in technologies, from that of a centralised broadcast (simplex communication systems) to that of the network, webwork of telematics and infomatics. At this juncture we have the opportunity to re-discover the original utopic possibilities of electricity, by re-immersing ourselves in the lost histories, the forgotten seminal points of an un-formed discourse of transmission. 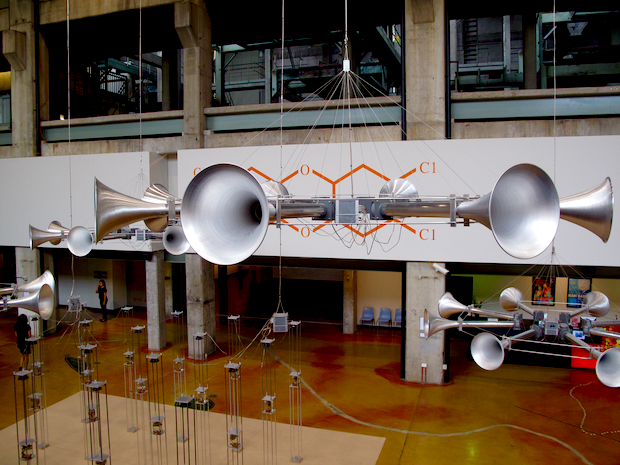 Conceptually a Silent Forest is intended to address the negative spaces generated by political and cultural events, in the belief that it is these in-articulate voids, which hold the key allowing us to glimpse, or grasp, the massive contradictions of our economic and aesthetic realities. It is for this reason that the work is structured to avoid a frontal or factual approach (which is the task of other media perhaps) and to take as its principal axis the active seeking of zones of cessation, of inertia of smothering, for these are traces of suppression and marginalisation, the fault-lines of action. 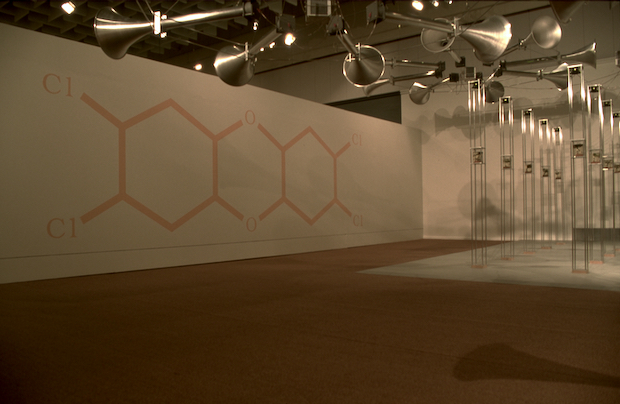 Silent Forest proposes that we listen to a cluster of silences decreed by political and military power and as such, is itself, constructed as a tracing of colonial and (neo) colonial relationships linking cultural form with political force. The installation, together with its accompanying radio broadcast, weave a sonic web between a natural environment under chemical siege and the High culture of Western Opera, here exemplified by the French built HaNoi Opera House. The massive deployment of dioxin defoliants in VietNam to create an Ecological silence is metaphorically linked to the prime function of the HaNoi Opera, employed as both a sign and transmitter of the colonial process and charged with the task of extinguishing the traditional with the Imperial. 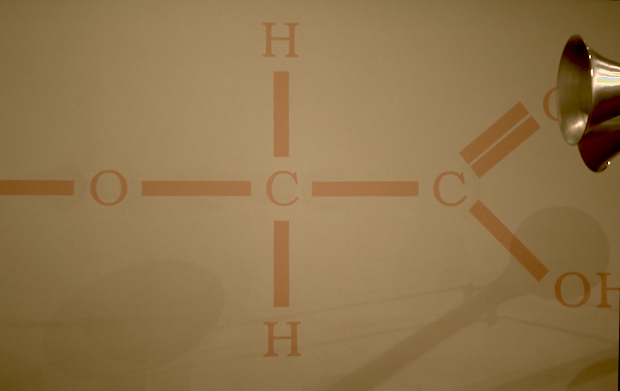 Physically the work consists of two multi-source sound delivery systems – one modelled on early warning sirens, which act as an incongruous image to ironically link the technologies and soundscapes of Warfare with the technologies of Music culture. The second gallery space houses a sonic forest pregnant with absence.

As its central icon the work adopts the form of the large carousel of early-warning speakers that until recently surmounted the Opera House in HaNoi (they were removed in July 1995 as part of the refurbishment programme designed to return the Opera House to its original colonial splendour!). This siren configuration acts as a physical and sonic leitmotiv, delivering the audioworks which interrogate the politics of French colonialism (and subsequent North American neo-colonialism). The multiple, overlapping audiotexts juxtapose reconstructed fragments of western art music which, by mimesis or concept represent the ‘forest’, with a series of ‘siren performances’ to be finally overlaid by reconstructed fragments of traditional Vietnamese music.

Within the sonic forest a matrix of sculptural towers relay not the whispering of foliage or the rustling of a myriad of forest creatures – here the forest is reproduced from the surface noise of early archival 78 r.p.m. field recordings. The arrow of time is resolute – the loss, silence or absence evoked by such an inversion is manifold – in reality many of the animals and habitats preserved on these recordings no longer exist – indeed what is lost forever in the biosphere is mirrored here by the extinction of recording and storage technologies themselves. We might consider analogue, disk based recordings as an endangered species, which are in effect silenced ,inundated by their own surface noise and relegated to the margins by the hygiene of digital fetishism.

The forecourts of traditional Vietnamese Temples frequently house (in a somewhat oxymoronic manner) largescale bonsai arrangements, portraying extensive mountainscapes. Bonsai, as a paradigm of cultural effect and control is employed here in a triple signification, as specifically Asian, as specifically landscape, as specifically modified through human agency. Beyond this the bonsai in Silent Forest participate within yet another trinity of enclosure; in that they rest within the antennae-like towers which comprise the ‘forest’ section, they are captive specimens – dislocated within the precincts of scientific examination and finally lie inundated by a viscous fluid which preserves their form but petrifies their growth. They stand mnemonically for the “Land of the Dead” – the colloquial Vietnamese name for those vast areas of jungle rendered desolate by Agent Orange Defoliation.

Thus Silent Forest juxtaposes multiple silences and loss. The work is sourced within the specific historical and geographic locales of the Vietnamese forest, a forest unwittingly at war – reduced to silence by chemical defoliants. This act of muting resonates against the cultural silencing which is implicit in colonialism, specifically embodied here by the imported culture of European Opera employed to overlay and obscure traditional expression. Silence plays on ironically, in the muting of the Divas themselves since they departed HaNoi in 1954, to be replaced by the cacophony of the air-raid siren – itself now redundant, bowing out to the raucous cries of the hawkers announcing the new-world economic order.

And here the catalogue essay for Silent Forest at SoundCulture 1996 by Douglas Kahn. 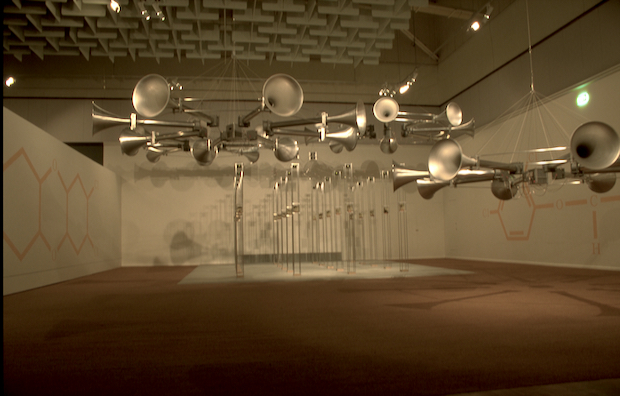 And here are the mixes from the installation