You are here: Home » Sonus Maris 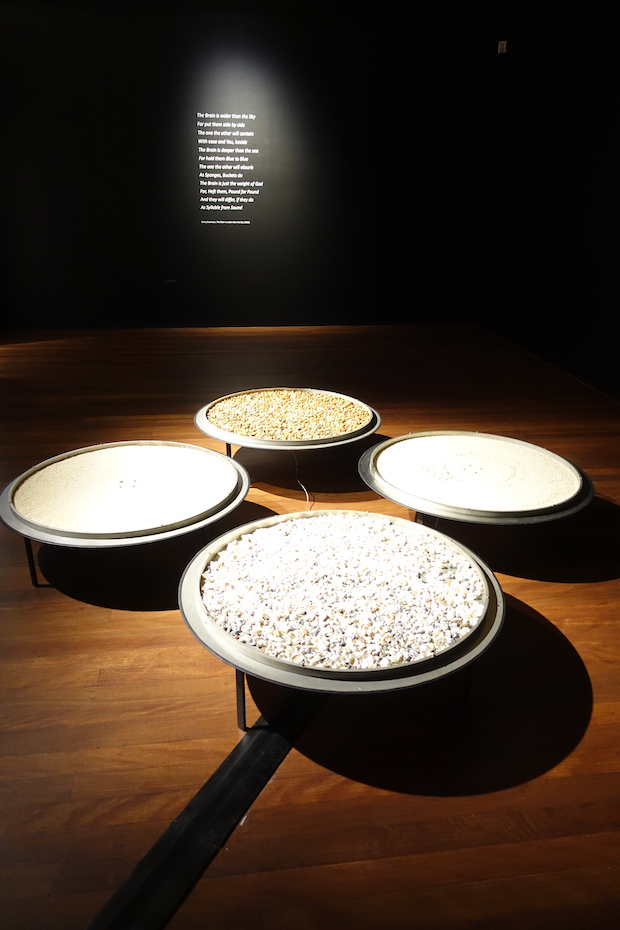 We are neurologically predisposed to seek patterns in our surroundings, in fact pattern
recognition is our core cognitive ability, vital to our evolution and survival as a species-
as it affords the capacity of prediction. 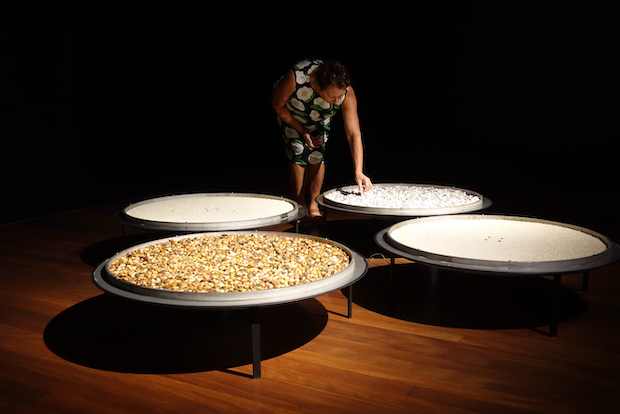 In life, as in art we take delight in the symmetries, growth patterns and morphologies of
the natural world as through them we recognise our own formation. However there is
a constant flux between the regularity, or predictability of a pattern and an instability or
turbulence that might threaten to render it indecipherable — to walk this tightrope
between order and chaos is one of the central techniques of art, to distill clarity from
chaos is the purpose of science. 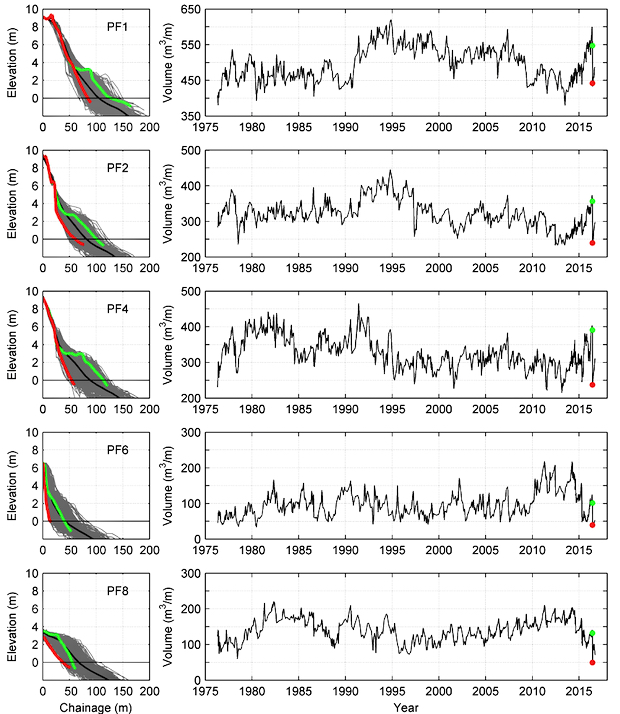 In 1917 the Russian Formalist writer Viktor Shklovsky made a distinction between
poetry and prose, coining the term Ostranerie (or Defamiliarisation) a device for making
strange, to render a common thing in an unfamiliar manner or context to create a fresh
perception of it. This trope of making strange with language has recurred throughout the
twentieth century, surfacing as Freud’s notion of the Unheimliche (the uncanny) as
Berthold Brecht’s Verfremdungeffekt (the estrangement effect) and as Jaques Derrida’s
Différance (which hovers somewhere between difference and deferment). 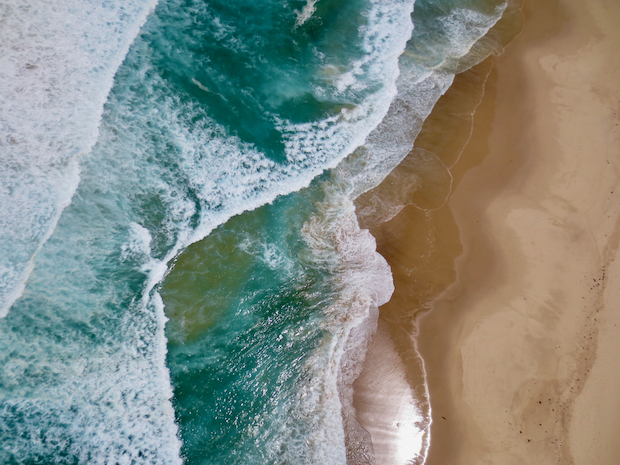 The probabalistic learning that pattern recognition develops is extremely useful in the
prosaic world — it is the way we navigate our daily lives. However in creative practice we
always require a twist to a narrative, a dissonant metaphor in a joke, or an unpredictable
note to conclude a melodic series. This is the sweetspot, the point at which our expectations
of regularity in a pattern is disrupted — but not too much, just enough to throw the brain into
mild confusion. It is the fissure, the reveal, the punchline that reflects back on the narrative-arc
and plays with our assumptions. 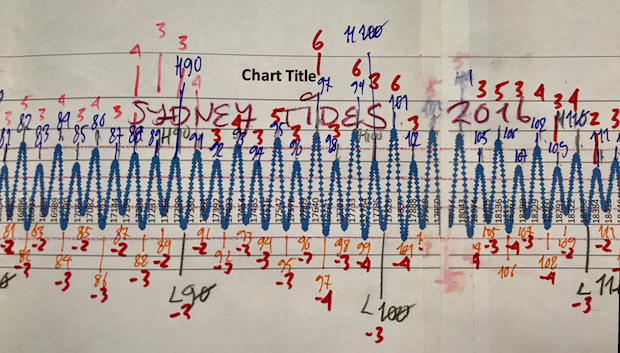 Quantising the Tidal data into a series of tones.

Science is based upon empirical evidence, it observes and carefully quantifies the
complex phenomena that surround us in an attempt to make sense of chaos. At the
small end of the scale each wave or that crashes onto the beach at Narrabeen creates
turbulent swirl of sediment, multiplied thousands of times in each individual storm. 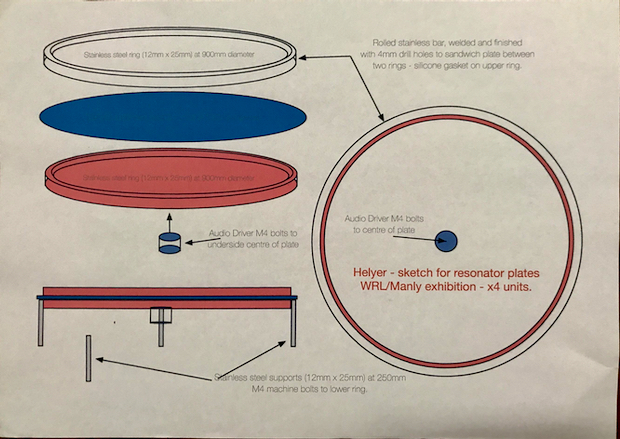 Construction drawing for the Chaldini Plates.

The Scientists of the Water Research Laboratory understand these individual events
as nonlinear interactions which are difficult, if not impossible to interpret or predict.
However the lab has been monitoring the shifting shoreline at Narrabeen for over
43 years and from this long-term view it is possible to identify an accumulative effect
in which the sand volume rotates between the northern and southern end of the beach
in cycles that range between two to seven years.

When considered in conjunction with wave and storm data an overarching mechanism
driven by climate emerges — it is our point of view along the axis of the particular to the general<br
that allows us to see the wood from the trees. 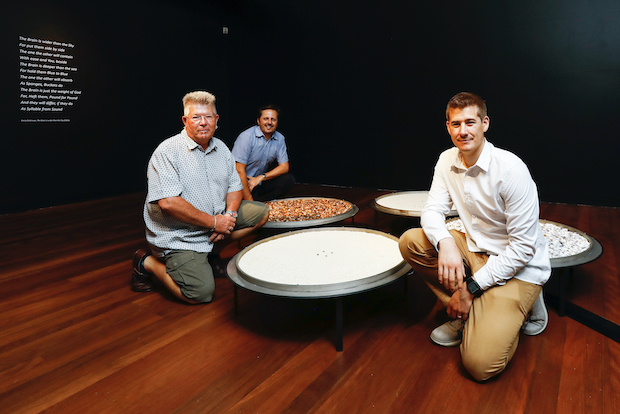 Artist Nigel Helyer with collaborating engineers Mitchell Harley and Chris Drummond
in front of “Sonus Maris (the sound of the sea)”. ”Manly Dam Project”, an exhibition
inspired by the unique landscape and cultural significance of the Manly Dam area.

Technical Notes.
Sonus Maris is the result of an Art and Science collaboration with the scientists and engineers of the Water Research Laboratory of the University of New South Wales.

The artist worked with data relating to the movement and deposition of sand on the beach at Narrabeen (in fact this is the world’s longest observation of sand deposition – taken over a period of 43 years) and is accompanied by tidal data and wave height. The artist quantised these data and then assigned a range of tonal values, that are played via audio actuators fitted to four Chaldini plates* and which excite various particulate matter on the plate’s surface. Sonus Maris sonifies and visualises abstract data sets across the four plates operate at very low frequencies generating a palpable and visceral experience.

The project has been extremely popular with both the general public and with the scientists and engineers of the laboratory – so we shall continue our collaborations.

* Ernst Chaldini (1756 – 1857 Hungarian/German) developed Robert Hook’s experiments of 1680 where he had observed nodal patterns manifest on vibrating glass plates (he employed flour activated by a violin bow stroking the edge of the glass). Chaldini patterns or figures are a method to demonstrate nodal boundaries in vibrating surfaces and have similarities with the solutions of the Schrödinger equation for one-electron atoms.