You are here: Home » Blog » Under the Icecap 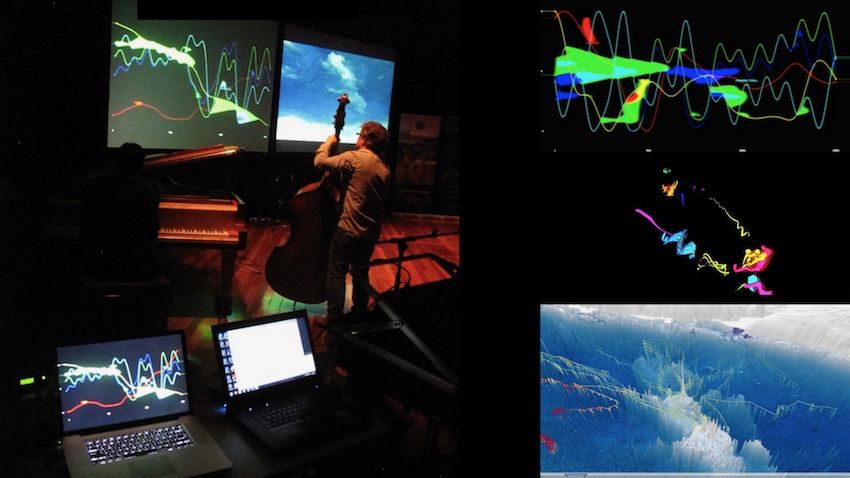 Abstract.
Under the IceCap is one of a series of creative outcomes resulting from the Bio_Logging Art + Science project  at the Institute for Marine and Antarctic Studies at the University of Tasmania.
Bio_Logging is a collaboration between Artist Dr. Nigel Helyer and Marine Scientist Dr. Mary-Anne Lea (IMAS) which seeks to link scientific bio-logging data collection and GIS techniques with the Artist’s interests in interactive acoustic cartography and the development of AudioPortraits that extend the conceptual and intuitive grasp of otherwise extremely abstract data.
http://www.sonicobjects.com/index.php/projects/more/bio_logging/

Introduction.
In the current phase of our work we are visualising and sonifying complex bio-logging data collected by Elephant Seals on their deep dives under the Antarctic Ice shelves (to depths of 2000 m) and their long Southern Ocean transits (over thousands of kilometers).  We are exploring novel ways to make these data-sets palpable, by manifesting them as a series of experimental music concerts.  Each concert in the series is designed to test the hypothesis that musical training is particularly well adapted to negotiate complex streams of data unfolding in realtime.  We are experimenting with ways for musicians to respond to data-generated 3D mappings, visual scores and direct data sonifications and we are listening for the potential resonances and confluences that bridge the data and the sonic response.

This presentation summarises the first concert, Vox on the Rox (April 2012) at the Conservatorium of Music (Hobart) which will be followed shortly by Dots on the Rox (August 2012, to be presented as part of Australian National Science Week).

The Context.
The seeds of the collaboration were planted during the Fourth International Conference on Bio-Logging (Hobart March 2011) when Dr. Helyer created an interactive sonic sound map from satellite bio-logging data collected by IMAS, the Australian Antarctic Division and French scientists from tagged marine species around sub-Antarctic islands (Heard, Davis and Kerguelan Islands).

The collaborators realised that the extensive and extremely complex datasets collected by southern elephant seals diving under Antarctic Ice, or transiting across the Southern Ocean, represent a considerable interpretive challenge and provided the potential for a hybrid art and science exploration of new methods and forms for manifesting the data and for developing novel forms of public awareness and debate.

Geography and species.
Some facts and figures ~ the Southern Elephant Seal is the largest pinniped and exhibits strong sexual dimorphism, the males being significantly larger than the females.  Males have been recorded to weigh up to 4000kg with a length of 6.85 m.  The smaller females forage mainly in the pelagic zone whilst the males will forage in both pelagic and benthic zones, diving to depths of up to 2000 m with the ability to remain submerged for two hours.  There are three main sub-populations, the South Atlantic, the Indian Ocean and the sub-Antarctic islands of the Pacific Ocean.  The bio-logging devices illustrated above (figure 3) are attached once the animal has moulted and with luck can remain in-situ for up to a year.  The device transmits a range of data to a satellite each time the seal surfaces providing information about location, temperature, salinity, pH and other water qualities etc (see Figure 2).  Because of their capacity to dive deep in the water column and their habit of foraging under the Antarctic ice shelves Elephant Seals have provided information otherwise unobtainable about Polynyas, ice free areas associated with the production of ocean currents (thermohaline circulation) vital indicators of global climate change.

A Creative approach.
Our work has focussed upon data associated with seals foraging along the ice shelves and making their long ocean transits to sub-Antarctic islands.  For the Vox on the Rox concert we grouped our data sets into three movements.  In the first movement we created animated graphical scores that displayed a single animal with four sets of paired variables (surface wind speed, depth with salinity, depth with temperature and ocean bottom with density).  Movement 2 represented two animals with two sets of paired variables and the third movement four animals with one set of paired variables.  The graphical scores were synchronised with a 3 dimensional map-like representation of the seal dive and transit track (see figure 4 above) and the four performers  were free to follow both visual data flows simultaneously on large high resolution projections.

In the first movement each instrument was assigned a set of variables collected by a single seal, for instance Piano to Surface wind speed, Saxophone to Depth and Salinity, Double Bass to Depth and Temperature and Guitar to Ocean Bottom and Bottom Density.  In the second movement each of the two animals has two instruments assigned to its data and thus in the third movement each seal was followed by a single instrument, our attention being drawn to the points in the data flow where seals intersected geo-spatially and the potential for the musical interpretation to likewise correspond.

From a metaphorical perspective the relationship that evolved between the four improvisation musicians during their first encounter with this data-environment (we agreed not to review or rehearse the material) forges strong parallels with the situation of animals foraging in the harsh underwater world of the ice shelf.  In both cases information has to be processed instantly and a response generated on-the-fly.  However this is not simply a response to the perceived external environment but also builds a network of communications within the group, developing a form of entrainment, establishing a collective response to the unknown, inventing a methodology that maps the environment and its patterns.

Naturally from a strictly scientific perspective a valid criticism can be raised concerning the level of ambiguity and ambivalence of any intuitive response to these graphical scores and 3D mappings, especially when they are an initial response generated instantaneously to be simultaneously negotiated within the ensemble.  However even the scientific data itself is a generic and scant description of the vast and complex reality of the living environment, not to mention the statistical tools and representational techniques employed to give meaning during data analysis.

We will continue with our hunch that the skills and perceptions of musicians place them in a good position to interact with complex streams of realtime information and that through a process of iteration we hope to locate a sweetspot that connects the traditional scientific approach, with the creative sensibility, effectively opening up an enormous range of human enquiry into the natural world to a wider public.

← EcoLocated: Art Science and the Environment.
An Atlas of Small Voyages →