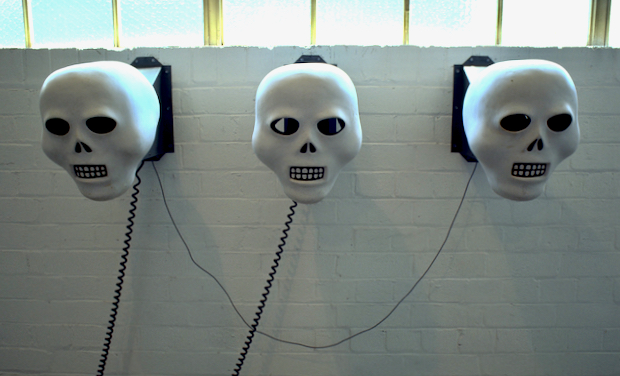 We propose to witness the 500th anniversary of Cristobal Colon’s first sighting of the Americas with a series of three cultural actions /interventions.  In northern Mexico, at the meeting point of the provinces of Chihuahua, Coahuila and Durango is a region known as the Mapimi Desert.  In the Cretaceous Age it was the Sea of Tetlis.  The scenery is lonely and unreal, an apparently lifeless desert supporting only cacti and hardy weeds. Unique, prehistoric life forms survive in these harsh conditions: a species of triangle shaped marine shells live under the sand; there is a burrowing tailless tortoise, the Bolson, or Yellow Margin, a direct descendant of the great marine turtles that once swam the Cretaceous seas. 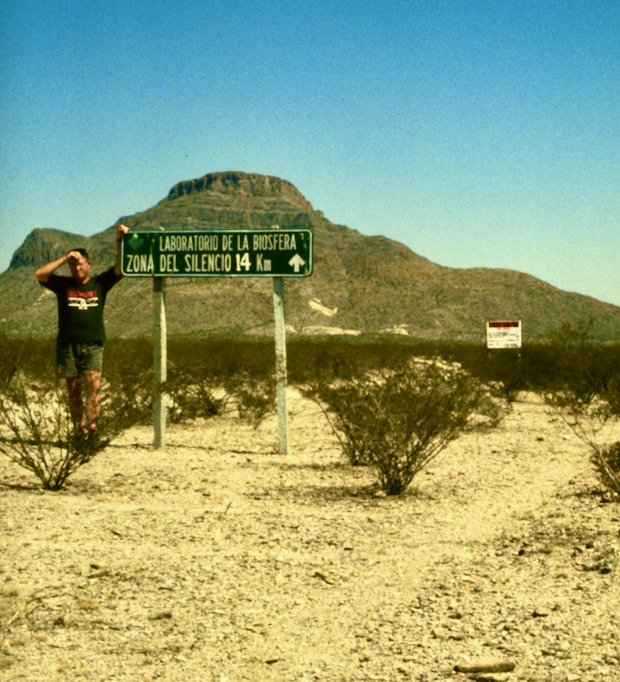 In this region, between 104 and 107 degrees longitude and astride the 27th parallel is found La Zona del Silencio: a region where radio waves in the Hertz AM. frequencies can neither be received nor sent and clocks and vehicles cease to function. Such electromagnetic anomalies are thought to be linked to the unusually high percentage of meteorite debris that litters the surface of the Zone.  It is in this Zone of Silence that we propose to commemorate the Quincentenary. 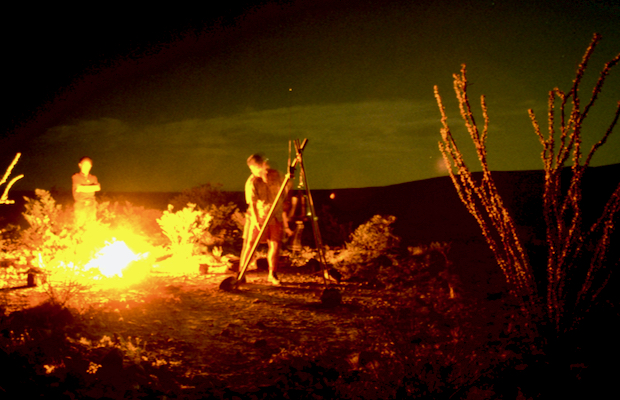 Rationale.
This proposal is premised upon a series of Temporal, Spatial and Cultural trans-locations/dis-locations. (Not the least of these being that our acknowledgement of Columbus Day as October 12th itself highlights a dis-location in the social construction of history. The October 12th landfall accords with the Julian calendar used in Columbus’ day. By our present Gregorian calendar, the first European landfall in the Americas takes place on October 23, 1492. This inconvenient temporal slippage cannot be acknowledged to any significant extent within the “noise” of the Quincentenary). 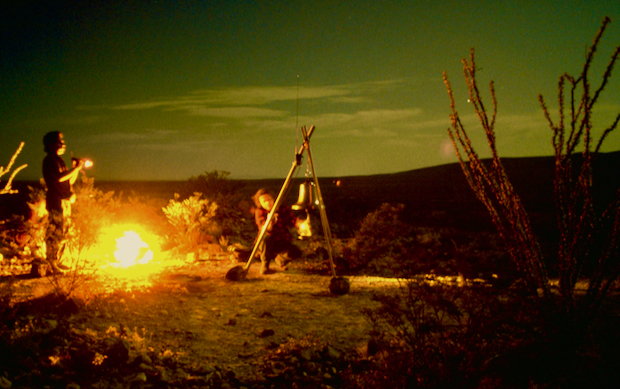 Our serial works attempt to create a lacuna within the relentless flow of historical narratives generated around this anniversary. These interventions acknowledge the mythic nature of this story whilst addressing the political and social context of its telling. The works we propose constitute a series of resonant geographic and historical metaphors.  As the mass media approaches a saturation of competing Columbian narratives, entering a “Zone of Silence” offers the only possibility for clairaudience in the cacophony. 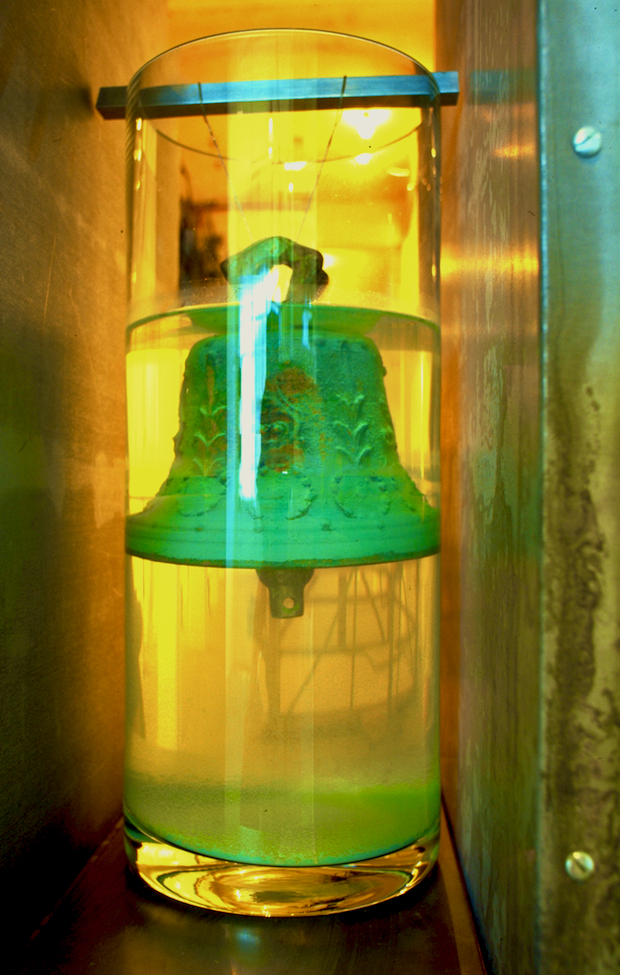 Our non-functional desert broadcast addresses the historical facts with more lucidity than most of the International re-creations of the “Old-World/New-World” encounter planned for 1992 by directly engaging with the paradox of the inaudibility of that historical moment.  The metaphor of these actions is extended through their multiple locations. The sounding of the Ships bell on the dry bed of a Prehistoric Ocean invokes a site where history has ceased to sound – the dysfunctional radio transmission speaks to the place of radio as the monitor and medium of history making.

The location of the radio receiver/speaker array within a Mexico City metro station suggests a series of juxtapositions between cultural and historical processes. In the densely populated urban areas of Mexico City the metro exists as a unique public space for exhibition purposes: sites which graze pre-Columbian history by virtue of their co-location with archaeological remains of Aztec culture. In the anticipated (non) transmission of the desert event, the speakers will relay the sound of white noise – further evoking a lost ocean.

Second Worlds – fixing a position.
It might at first seem incongruous for this proposal to originate in Australia. In the first instance we are motivated by a perceived shift in the axis of Geopolitical dialogue; from that of East/West to that of North/South – in recent history Australia has experienced a shift away from its traditional European cultural orientation and uncertainly seeks a cultural and economic position within its geographical location.

Whilst we propose no direct comparison between the two continents we none the less share with Latin America a history of European colonisation; a dominant immigrant culture; an unresolved relationship between this and the indigenous culture; and a deeply ambivalent cultural and political relationship with the U.S.A. and Europe.

We acknowledge the trajectories of colonial exploitation in each continent have been radically different; divided as they were by major shifts in European thought and motives for colonisation.  Our Cultural intervention proposes a position, which lies parallel to a Latin American colonial experience but does not seek to co-opt it in the manner, which the majority of European and North American Quincentenary manifestations inevitably shall.

Synopsis.
Stage 1~ Sounding.
We begin our project with a Ship’s Bell, borrowed from an Australian maritime Museum – and then journey with the Bell to The Zone of Silence, where it will be rung according to the conventions of a ships watch.  We shall attempt to broadcast this sound-event to an installation of eight speakers in an appropriate Metro station in Mexico City.

Stage 2 – Installation.
The realisation of an inter-media installation (sound/image /object/text) at sites in Mexico City and Sydney. This will combine documentary material of the work in the Zone of Silence with ambient sound recordings of the desert (and the narratives of its inhabitants) integrated with text drawn from El Libro de la Profecias (the Book of Prophecies) written by Columbus at the end of the third voyage. 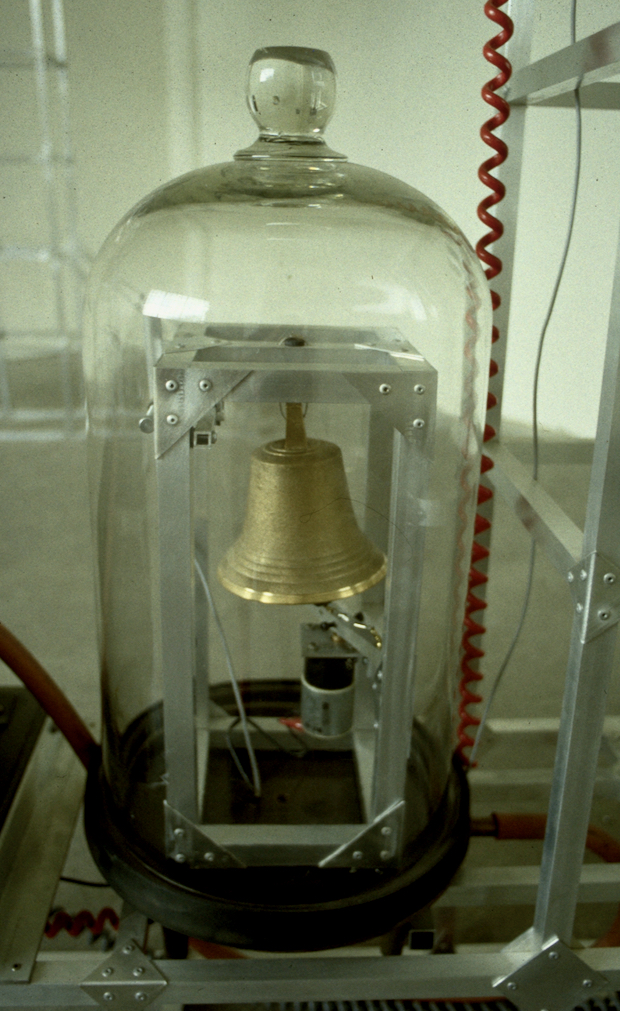 Stage 3 – Broadcast.
The preparation of a two part Radio broadcast. The first being a historical narrative, providing a context within which to hear the second element: a poetic audio work structured around recordings made in the Zone of Silence. The Bell will provide a temporal framework for the sonic narratives of the Zone of Silence. These will be integrated with fragments of Columbus’s Prophecies, indigenous mythologies and local stories.

Stage 1 ~ Sounding.
The bell is a physical and sonic icon, which creates a metaphoric bridge between the territories of technics and poetics. The sonic component of the bell is centrifugal as it ripples outward marking and identifying a locale: it is simultaneously centripetal, calling the faithful (spiritual or economic) to the centre. The original social function of the bell as a call to worship has in industrial culture been masked by its co-option to serve as a timekeeper, metering hours of production and synchronising the logistics of transport. 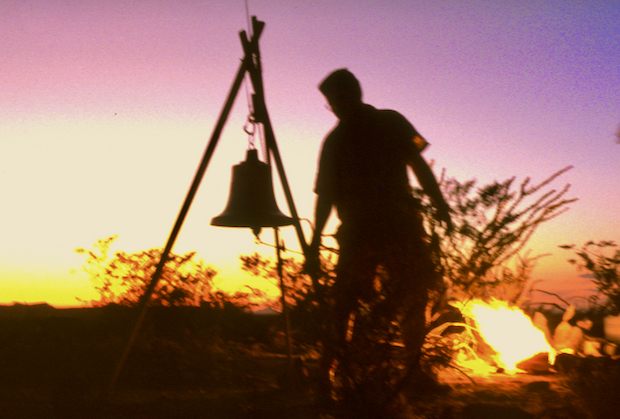 The destination of our journey will be The Zone of Silence in the Mapimi desert of northern Mexico and here the Ships Bell will sound out the rhythms of the Ships Watch over the 24 hours of October 12th (Columbus Day). The Sonic form of the Bell locates itself in this desert context as a dual metaphor of the sacred and the profane, echoing the duplicity of Columbus’s responses to the ‘New World’ – those of aesthetic appreciation mixed with material exploitation.

We will attempt to broadcast the Bell signal via AM Radio transmitters to an installation of Radio receivers/speaker arrays located in an appropriate Mexico City Metro station. 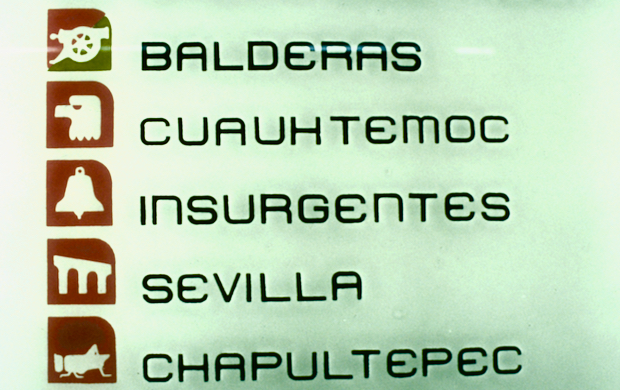 A Radio listening post was established at Insurgentes Metro.

Stage 2 ~ Installation.
From the initial “Sounding” action in the Zone of Silence (together with its corresponding Metro site) we propose to develop a major Installation for the 1992 Sydney Biennale, which opens in early December. (The theme of the Biennale is ‘The Boundary Rider’, exploring the ‘border incidents’ that inform contemporary art making as well as global political life). We hope to make a presentation of this work in progress for a Mexican audience upon our return to Mexico City from La Zona Del Silencio.

This work will be inter-media in nature, embracing objects, image, sound and text. The sculptural elements will operate as a series of icons, designed to resonate at a metaphorical level within pre and post Columbian narratives (be these documentary, fictional or mythic). Whilst these sculptural /architectonic elements will be constructed around dominant iconic themes we also anticipate the inclusion of found natural objects (i.e. from the Landscape), found cultural objects (i.e. items of trade or worship) together with documentary traces from the original event.

This sculptural matrix will provide a context for the integration of documentary material from the work in the Zone of Silence; ambient sound recordings of the desert; the oral narratives of its inhabitants inter-dispersed with texts drawn from El Libro de la Profecias (the Book of Prophecies written by Columbus at the end of his third voyage). We anticipate that the sonic component of these works will be stored, sequenced and distributed by a digital system, permitting a soundscape with multiple sources, non linear programming and with interactive cueing. The net result being a complex and highly spatial “narrative” web flowing through the physical structures, such a system will provide an experience of the work unique to each viewer/auditor.

Stage 3 – Two works for radio.
Two complimentary but autonomous works for broadcast, each of 30’ duration.  The first is called La Zona, the second La Campana: conceptually notions of reception and transmission divide them.  La Zona foregrounds certain historical/documentary narratives. It concerns itself with reception: directly as a document of the (non) broadcast of the bell ringing action; with media saturation (of images and ideas related to the Columbian Quincentenary); and in the evocation of contested public space, in particular the Metro stations of Mexico City. 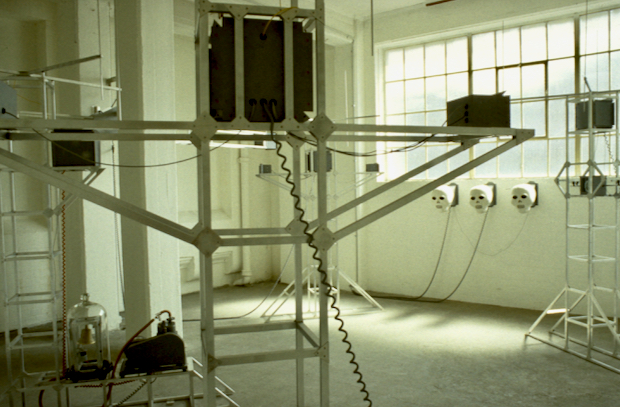 The Metro is in a sense a paradigmatic space for discussing the crisis in Latin American history. The Metro is the buried double of a vast, chaotic and filthy city. By contra-distinction the Metro is uncharacteristically ordered, clean and air-conditioned, a shelter from the violent excesses of the city surface. The Metro tunnels through the rich strata of the original Aztec city that which the Spanish intended to obliterate with the construction of Mexico City. Metro stations are used as exhibition space for archaeological treasures and specifically commissioned works of art. Buskers present the music and songs of the multiple ethnic groups of Mexico and South America, continually moved on by the police.

1. In La Zona the sounds of the Metro and the (almost) silences of the (non) broadcast of the Bell provide an architectural setting for a phalanx of narrative and documentary fragments. These audio shards will constitute an archaeology, both of the journey (transporting the Ship’s Bell to the desert), and of the competing histories (Pre-Columbian to Free Trade Zone) whose volume has been pumped up by the Quincentenary. Noise and confusion overwhelm the listening ear.

The narrative of La Zona moves the listener out of the city and onto the road: it concludes with the fading of the car radio, and perhaps with the ‘dying’ of the vehicle engine as we enter The Zone of Silence.

2. La Campana is an acoustic work structured around the cycle of the Ships Bell ringing the watch in ‘The Zone of Silence’. Formally leaner than La Zona the second work foregrounds the desert soundscape as the container for subtle narratives.

Notions of transmission shape these narrative elements: the oral transmission of history; the endurance of pre-Columbian cosmologies as residual memories; the telling of dreams and visions; the call of the bell (with its sounds at once centrifugal and centripetal). The spoken elements will be drawn primarily from the stories of local people mixed with readings from Columbus’s El Libro de la Profecias and Galeano’s Memory of Fire.

These works also propose transmission and reception as ways of viewing the European ‘discovery’ and exploitation of Latin America.   The complexities and ambiguities of La Zona and La Campana will oppose the obsessive focus on the cultural flow from East to West (Old to New world) – our works propose a process of cultural and historical osmosis, which is non-linear.

Both works will, of necessity, be multi-lingual, with Spanish as the dominant language. The works may however be re-configured for other languages at post-production stage.

Listen to extracts of the radiophonic projects La Zona and La Campana. 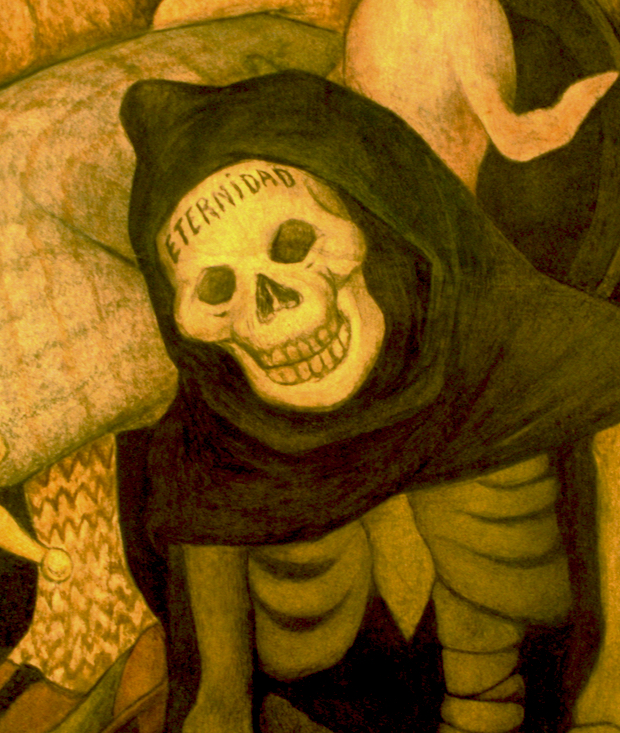