You are here: Home » Two Islands

This public art project was developed with the aim of representing the tangible and intangible layers of history and meaning in Franklin Square. The project was commissioned by the City of Hobart and was inaugurated in November 2018 after a three year development and building programme that included extensive community consultation and the creation of an oral-history soundscape contained within the work. 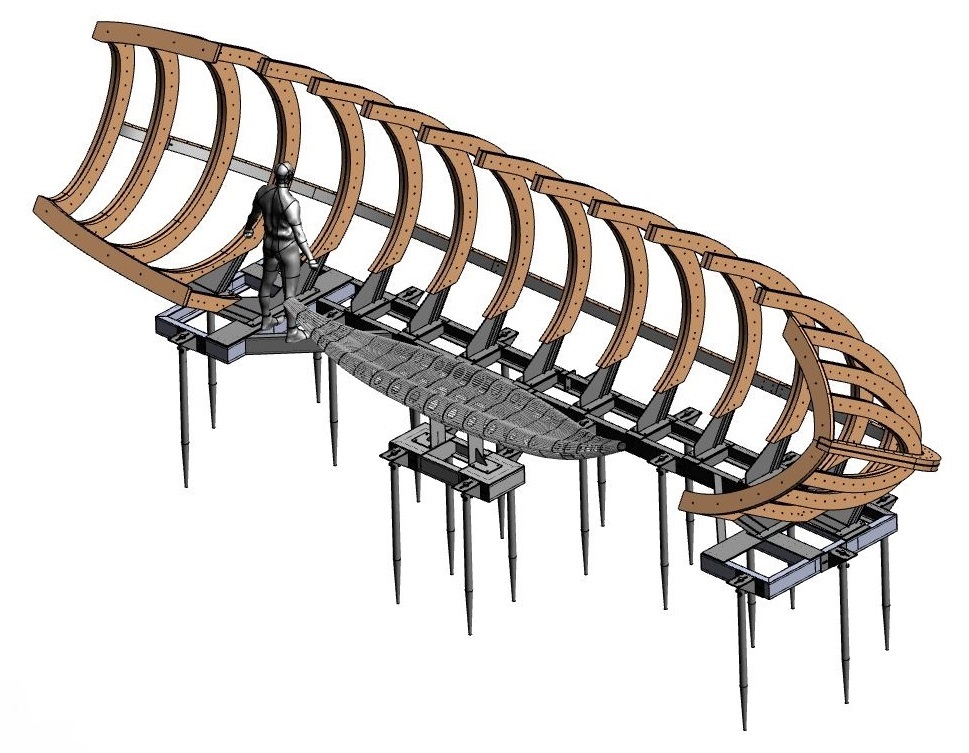 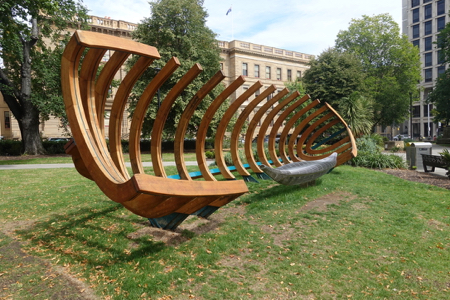 Installed in the park. 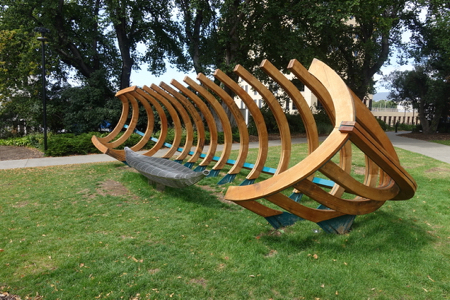 Artist statement.
The Two Islands sculpture presents a metaphor that draws together histories of Tasmanian Aboriginal and European settler cultures in the form of two symbolic vessels. The skeleton of Sir John Franklin’s ship the HMS Erebus lies wrecked alongside a contemporary representation of a traditional Tasmanian Aboriginal canoe, creating a tension that resonates with the complex histories of Tasmania. 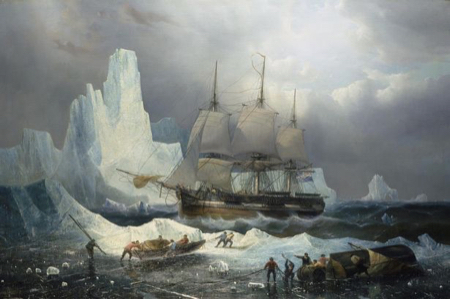 The Erebus on Ice. 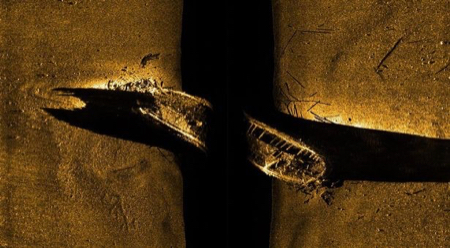 A sonar image of the Erebus at rest on the seabed in the North West Passage.

The Two Islands features a soundscape comprised of many voices and perspectives offering us potential to reflect upon the past to continue a dialogue of reconciliation into the future.

And here some words from the opening speech.
To launch is an apt word – as we push these two vessels down the slipway into the public domain. The image of the vessel in this Sculpture is used in both a literal and metaphorical sense. At the simplest level – one structure is a reference to Sir John Franklin’s ship the Erebus (who in Greek mythology is the god of Darkness, the son of Chaos and the brother of Night). As a keen sailor I am mystified why anyone would set sail in a ship with such a name to guide its fate). As we all know – the Erebus took the hint and is now lying on the Seabed in icy Arctic waters – a reminder that Empires flounder – the Erebus in Franklin Square is a skeleton of European aspirations. 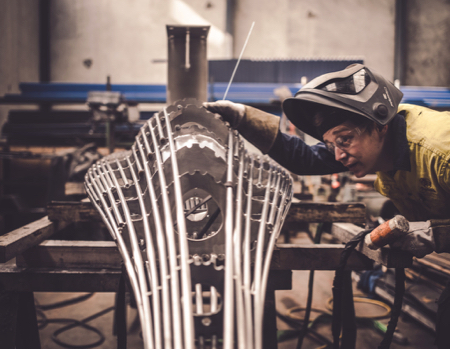 The second boat is an interpretation of a Tasmanian Aboriginal Stringy-Bark canoe (and is directly modelled on the fine example on display in the Tasmanian Museum and Art Gallery). But by contrast, the fragility and temporary nature of the canoe’s original materials are transformed into an enduring and contemporary form, placed at the focus of the sculptural setting. 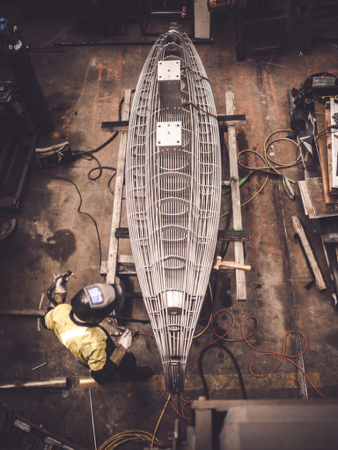 Metaphorically vessels are containers – they enclose and carry within them cultures, memories and of course hopes and aspirations – in this way each vessel is a floating Island – hence the title of the work.

It is my hope that the narratives contained within this work (sculptural and soundscape) allow us to take some time to reflect on the past – with its difficult and often unacknowledged histories – but that it also prompts us to see the present as an opportunity that challenges us to create a future of respect and tolerance. 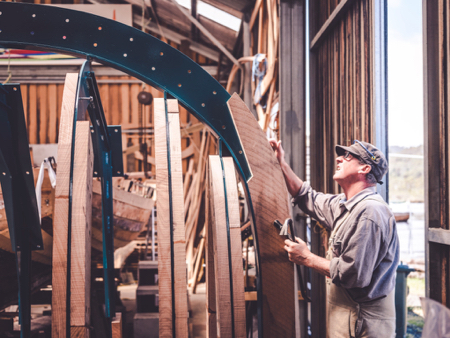 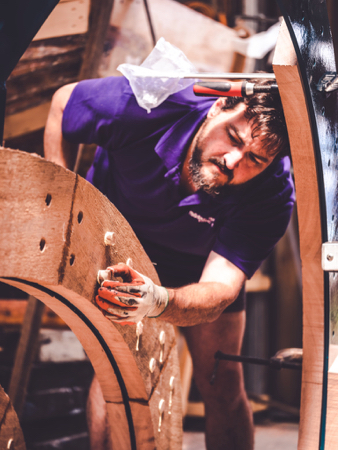 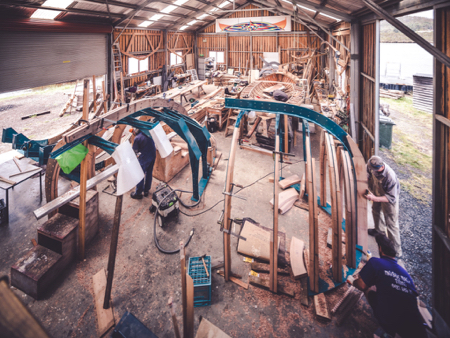 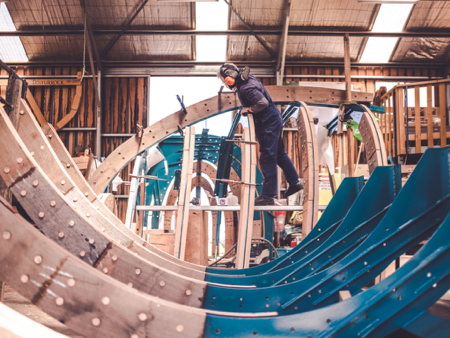 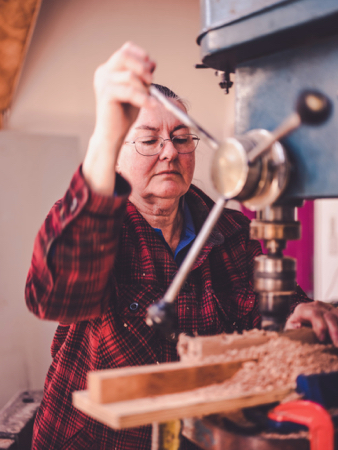 Acknowledgments.
The artist wishes to acknowledge the invaluable cultural guidance of Greg Lehman and Tony Brown and thanks all of those who contributed their time and voice to the project. Many thanks also to the technical expertise of Trent Baker of Armature Design, The Wooden Boat Centre, Dynamic Welding and Barking Owl Audio. 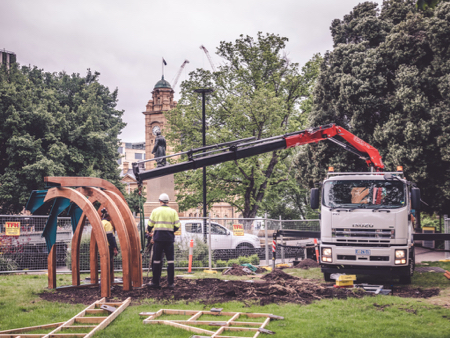 The installation commences at Franklin Square.

Project background.
The project was initiated in response to The Franklin Square Master Plan (2014), which included a recommendation that there be “…diverse interpretation of the park’s cultural heritage – particularly Aboriginal heritage” utilising approaches that could target a broad range of visitors. One recommended approach was the installation of public art (both permanent and temporary). 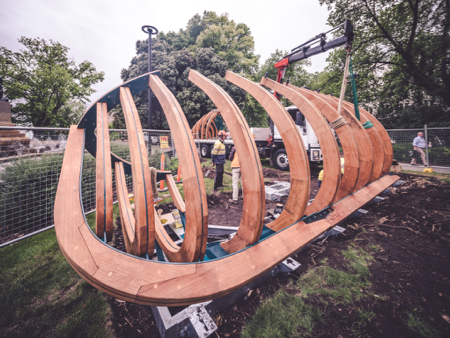 The public art commission was advertised nationally, with the artwork brief calling for a work that would “bring life to the rich and multilayered history of the park.” Nigel Helyer was selected by the City’s Public Art Advisory Panel, from a shortlist of three artists, each of whom was paid to develop a concept proposal. Offering feedback on the selected concept, Greg Lehman – a descendant of the Trawulwuy people of North East Tasmania – noted the following:
“The use of water craft to symbolise Indigenous and Settler colonial cultures has deep resonance with the histories of both cultures. “ 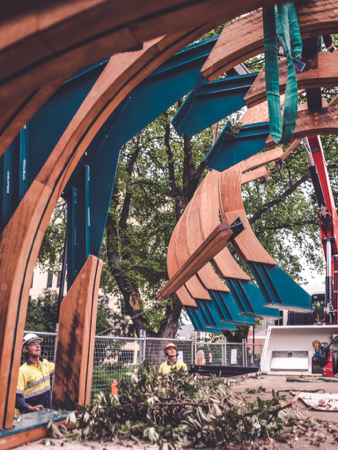 The selected artwork, “…refers to the wreck and loss of the Erebus, a tragic and unresolved history that might also serve as a metaphor for the decline of British imperial power, and perhaps even the uncertain future of Western technological culture (bearing in mind the growing threat from human-induced climate change and broader questions about sustainability of consumerist, commodity based economies). 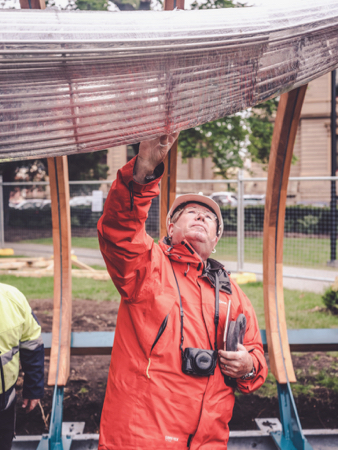 The canoe, by contrast, is whole and complete – communicating a quiet and confident beauty. It still rests within the presence of the wreckage, but has the potential to journey forth through the same access point that visitors use to enter the structure. I see this as a generous acknowledgement of not only the unbroken continuation Tasmanian Aboriginal culture – in spite of colonial domination of the past – but also the vitality that has been demonstrated by the reemergence of canoe building in recent years.”

A period of consultation, conducted by Greg Lehman working with the Public Art team, followed the selection of Helyer’s concept, including local Tasmanian Aboriginal groups and other relevant bodies or individuals. 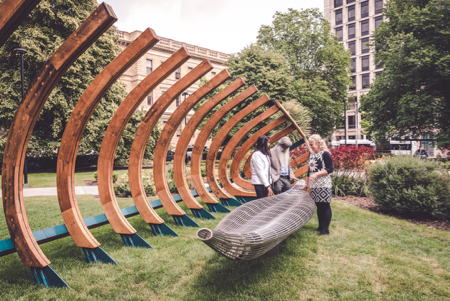 Local Tasmanian Aboriginal man, Tony Brown, worked with Nigel Helyer to develop the design of the canoe for the artwork and to draw together a group of contributors for the soundscape within the work. Council approved the work to go ahead in 2016 and the work received Development Approval (including Tasmanian Heritage Council approval), in mid-2017. 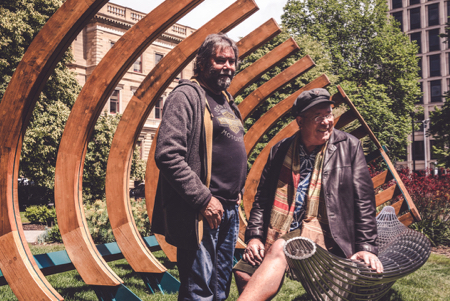 Tony Brown and the Artist. 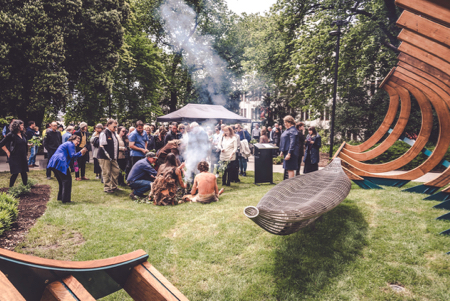 The sculpture was welcomed with an Aboriginal smoking ceremony and dance
the community taking the work on.

The scaled hull of the HMS Erebus has a 10 mm thickness mild steel skeleton as the armature for the boat. This is fixed to the ground via a galvanised, mild steel footing frame, which is concealed under the earth. A series of screw piles secure the footing frame into the earth. This steel skeleton is clad with timber, such that the boat ribs are like a series of structural “flitch” members (steel fin, with a timber cladding either side). The timber has an oil finish that will weather to a natural grey finish over time. 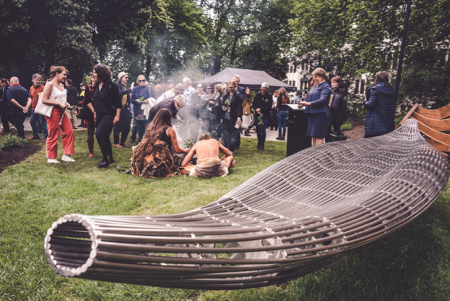 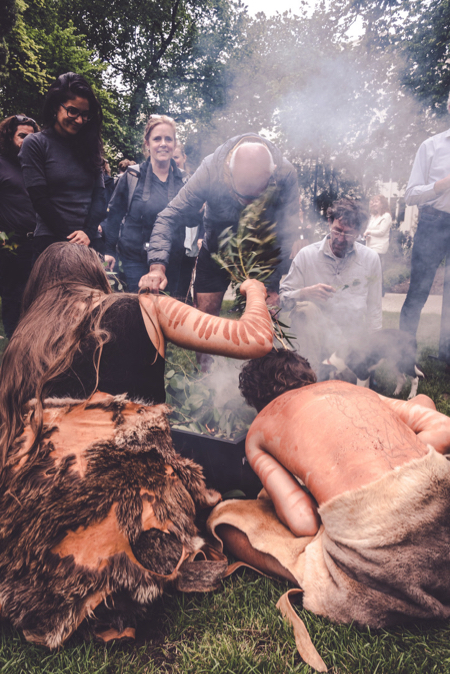 The canoe is made predominantly from solid stainless steel rod, which has been rolled to shape and welded to a series of laser cut profiles that approximate the profile of a Tasmanian Aboriginal Canoe. This element also forms a seat for the artwork, for visitors enjoying the soundscape, or simply sitting in the park. 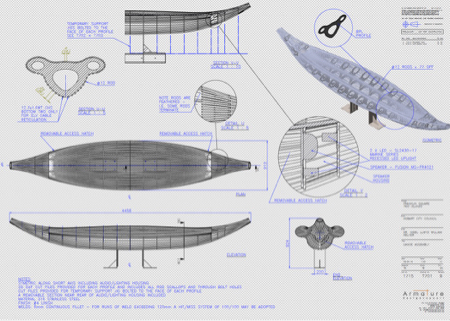 The speakers and sensors for the soundscape are securely housed within the canoe. A series of sound files are accessed at random, when triggered by the motion of someone approaching. Sound files might be of song, environmental sound, or sections of interviews with soundscape participants.

Lighting is also housed within the canoe and in the ground under the ribs of the HMS Erebus.
The artwork has been fabricated by businesses located near to Hobart. The stainless steel canoe, the armature for the HMS Erebus and the footing frame, were all fabricated by local Moonah business, Dynamic Welding, while the timber components of the HMS Erebus were constructed by the Wooden Boat Centre, which is located 40 minutes drive south of Hobart. The equipment for the soundscape has been programmed by local audio display specialists, Barking Owl. The installation of the work is carried out by the City’s Parks and City Amenities team, working with Complete Workforce Solutions. 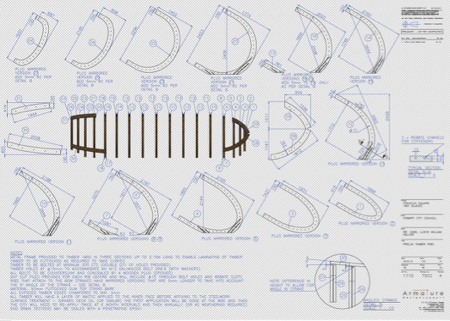 The design development and all drawings were undertaken by
Trent Baker of Armature Design Support, Sydney. 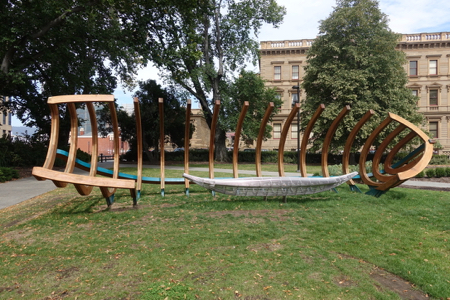 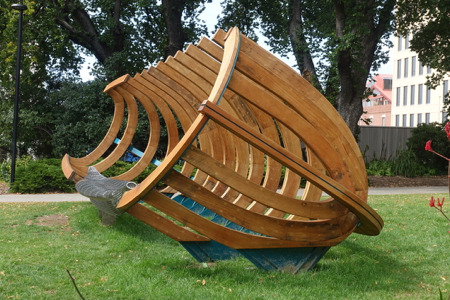 All images by Andrew Wilson Photography and courtesy of Hobart City Council.