You are here: Home » NomansLanding

The NomansLanding project is created by five international artists; Robyn Backen (Australia) Andre Dekker (Netherlands) Graham Eatough (Scotland) Nigel Helyer (Australia) and Jennifer Turpin (Australia)  and jointly developed by Sydney Harbour Foreshore Authority, Glasgow Life and Urbane Künste Germany, Nomanslanding made its debut at Darling Harbour in April 2015, and later featured at the Ruhrtrienniale 2015 in Germany. In 2017 the project made its final appearance at the Tramway in Glasgow, Scotland as part of the Glasgow Life, Refugee Festival.

The project was a response to a curatorial provocation, “Is it possible to create a site-specific work that is able to travel to three different locations?”  Our reasoning was to work with both the shared histories of the three locations, each of which has a strong relationship to conflict in the twentieth century and all of which are re-imagining their urban structures as waterfront cities in a post industrial age.

Foremost in our minds was a way to reinterpret the term “No-Mans-Land” which refers to the impasse, the place no one dares traverse, the gap of fear and uncertainty between two sides of a tentative safety – a memory and metaphor inherited from the impossible stand-off of World War 1 trench warfare.

How can this empty space, this vacuum of devastation be poetically reimagined? 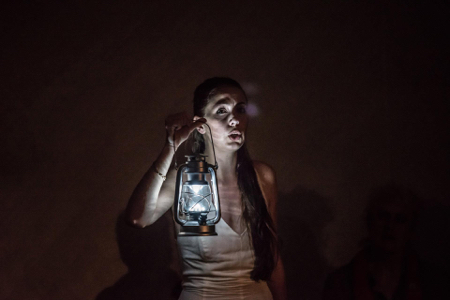 He who fights with monsters should look to it that he himself does not become a monster. And when you gaze long into an abyss the abyss also gazes into you. 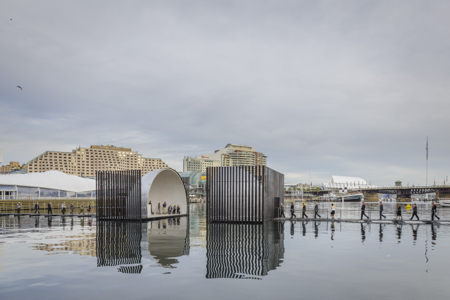 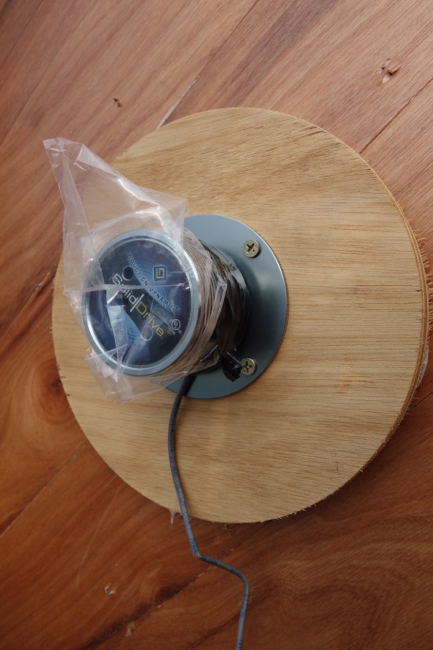 One of 20 audio resonators mounted on the dome exterior.

dreaming of the fields of Troy,
strategists calculate acceptable losses
sowing seed for an early harvest

and some fell on stony ground, some lay sleeping in rich loam
with a red chrysanthemum pinned to their foreheads
the lucky ones are sown together by the women

while other corpses scratch out letters home
brew strong sweet tea
and laugh at their last obscene joke. 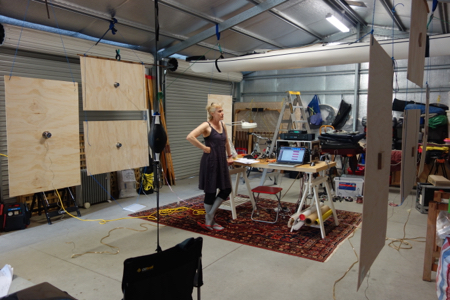 Sydney, development, construction and debut.
Nomanslanding is a sensory experience of transformation. The floating structures move slowly back and forth across the water to create and separate territory. Bridging the waterway the new ‘joint territory’ brings people together to experience, remember and contemplate. 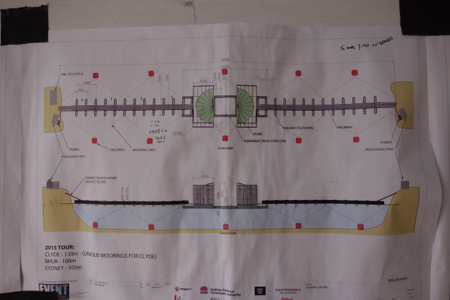 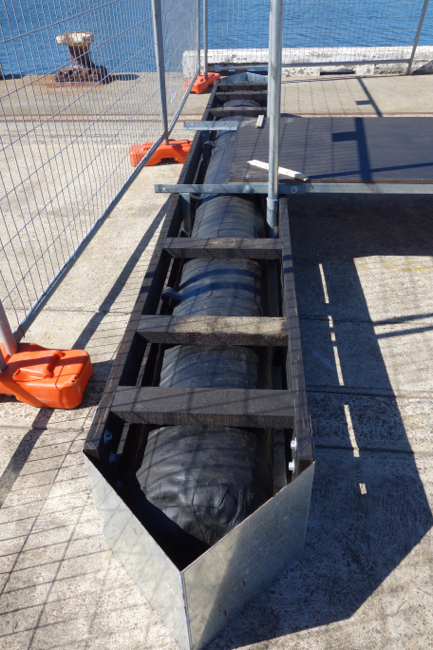 Floating Walkways
A pair of identical floating walkways are sited on opposing shores of waterways in Australia, Scotland and Germany. 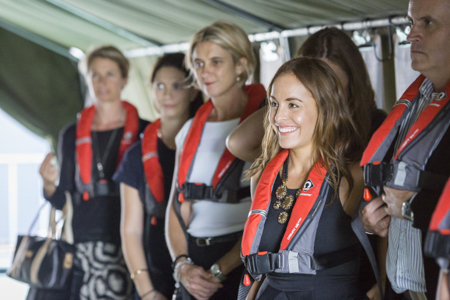 Visitors experiencing an induction in the military style tents.

Initially installed in Sydney’s Darling Harbour, the floating walkways travelled to the Duisburg Ruhrort Ruhr district and finally to the Tramway in Glasgow. The walkways extend slowly out to ‘meet’ halfway and then contract back to shore.

The Meeting of the Half Domes
Nomanslanding features a two stretches of floating, extendable walkways, reminiscent of early 20th century naval pontoon bridges. Visitors approach from opposing shores across the water, in an unfamiliar no man’s land, to arrive in a dome structure in the middle of the bay. 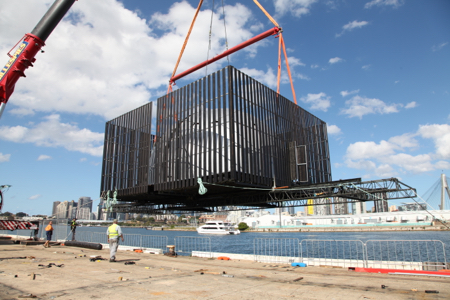 The dome structure is split in two and so visitors peer across a 10-m divide of water at each other – all the while with the cityscape of Sydney rising above them beyond the bay.

The two halves of the dome structure then move together, the gap between them diminishing, and visitors from opposing sides are united in a chapel-like, shared space for contemplation. 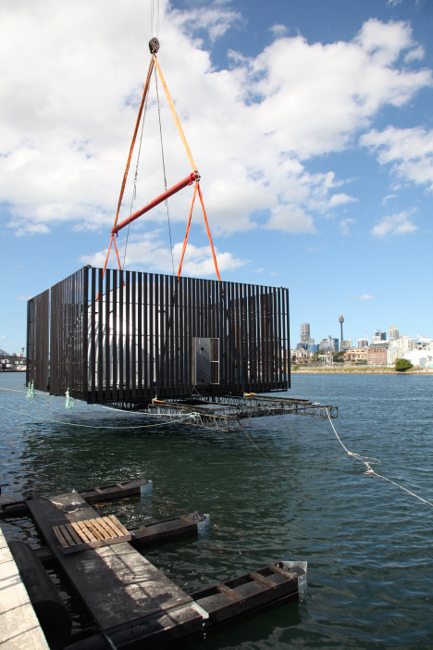 Acoustic Architecture
The experience is intensified by the acoustic qualities of the space. Like a ‘whispering gallery’, the sound of a voice is amplified in eerie reverberation. 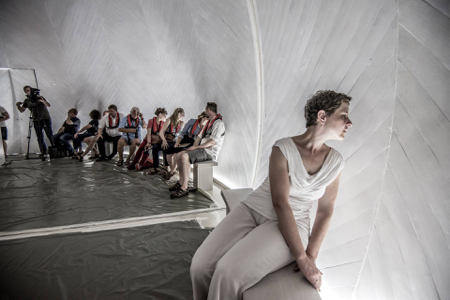 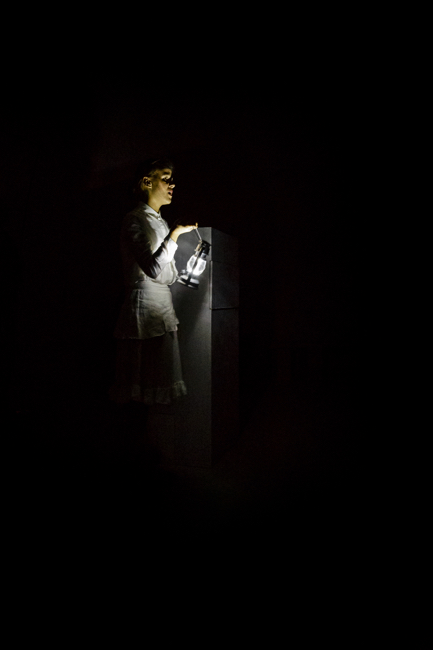 The twenty channel soundscape culminates with a “Lament” sung in the darkness.

Within the dark dome the audience experience a multimedia installation/performance; dramatic soundscape, a vibrating cupola and poetry ricochet across the dome, leading the audience from terror to redemption. 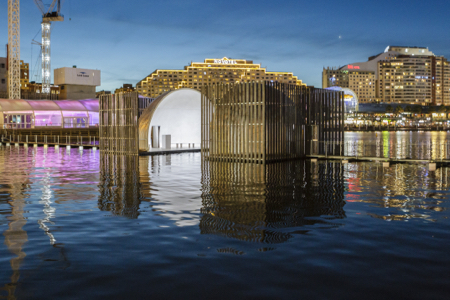 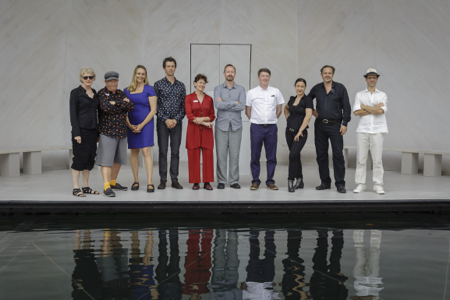 Some of the team at the Sydney launch. 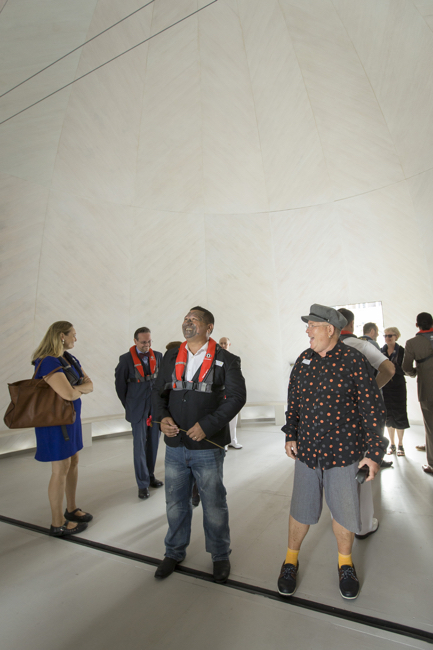 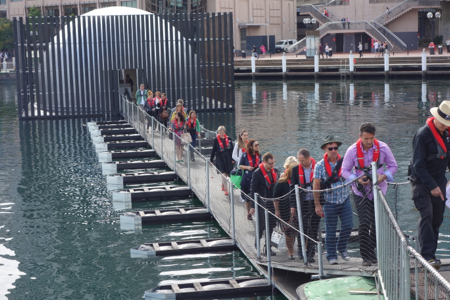 Ruhr Triennale.
The second exhibition of NomansLanding is as part of the Ruhr Triennale – here are some images from Duisberg/Ruhrort experience, images courtesy of Kreativquartier Ruhrort. 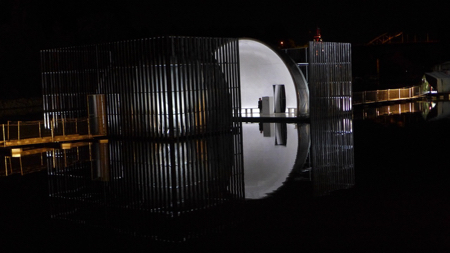 The work shown in Sydney and Duisberg functioned in an almost identical manner although theRuhr Triennale version included additional narrative in German including one of my favourite quotes from Friedrich Nietzsche “Whoever fights monsters should see to it that in the process he does not become a monster. And if you gaze long enough into an abyss, the abyss will gaze back into you.” 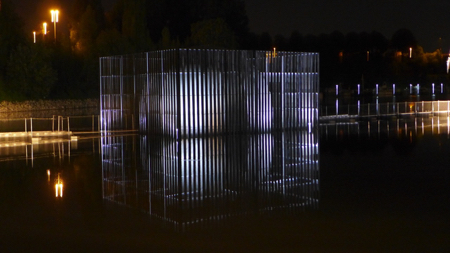 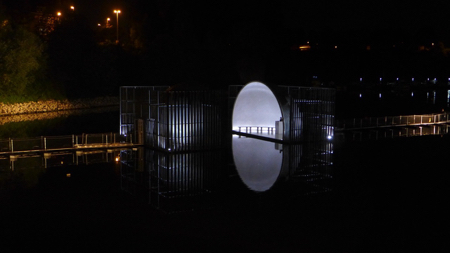 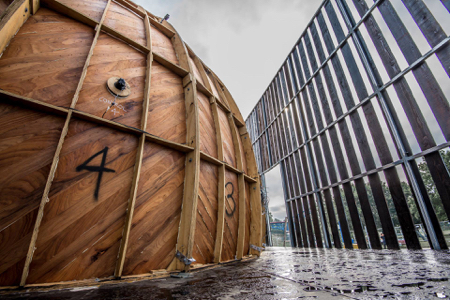 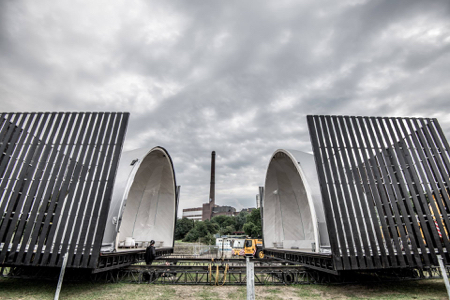 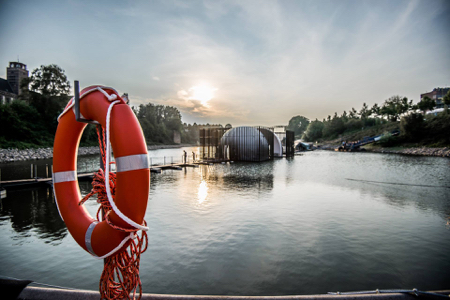 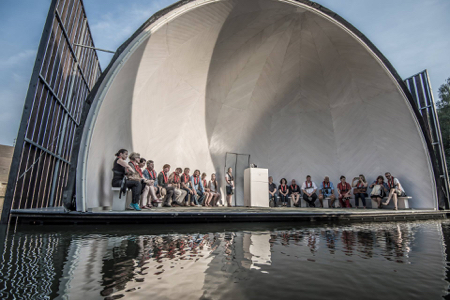 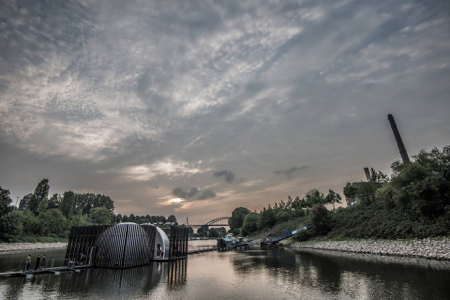 Glasgow.
For the final iteration of Nomanslanding we were unable to access the River Clyde (for logistics and safety reasons).  Initially the prospect of re-imagining such an ambitious project, which had already established itself as an iconic floating acoustic architecture in two international sites appeared daunting. 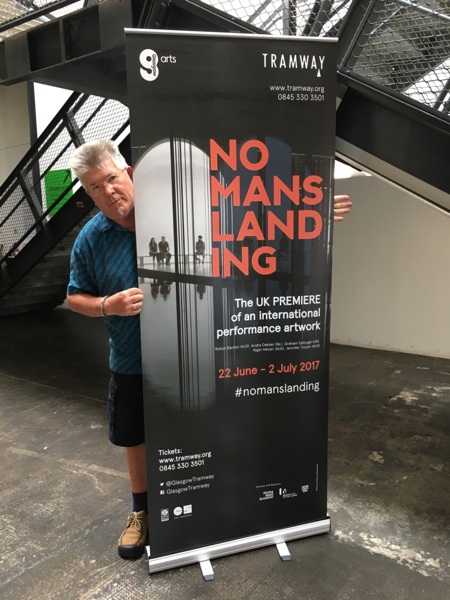 At the Tramway, Glasgow. 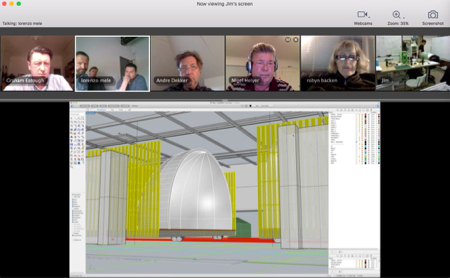 Urgent online planning sessions, would the dome fit into the
Theatre space of Tramway? Only just! 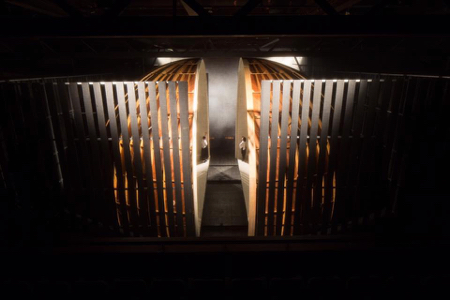 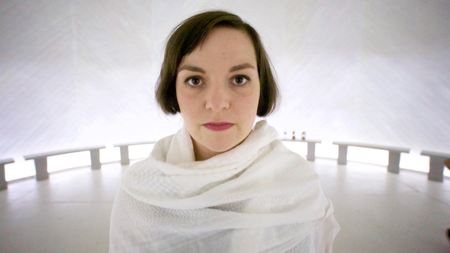 Ironically this challenge, coupled with the time constraints provided a huge impetus to create a radically new work, that embraced the benefits of a theatre environment to totally transform the Nomanslanding experience. 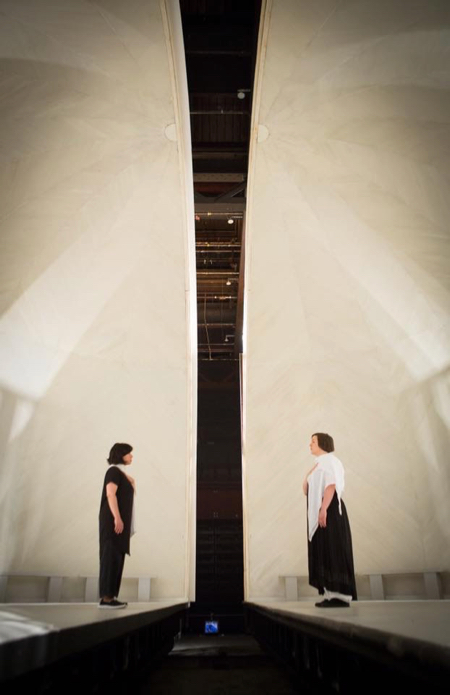 Our team worked closely with a group of international refugees as well as two talented singers, adding a strong inflection to the original theme of conflict and redemption.  From a formal perspective the work engaged strongly with the architecture of the theatre and in effect replaced water with darkness as the unstable element.

NoMansLanding at the Tramway Glasgow 2017 from Nigel Helyer on Vimeo.