Architecture for Bees and Bees for Architecture is a three day workshop at the Kaisanemi Botanical Gardens, Helsinki, Finland offered by Australian artist Dr. Nigel Helyer as part of the ongoing Melliferopolis urban bee project.

Architecture for Bees and Bees for Architecture is a project that considers the architectural capacities and potentials of colonial bees and the ways in which we can interact in the hive on inter-species co-creation of sculptural forms. 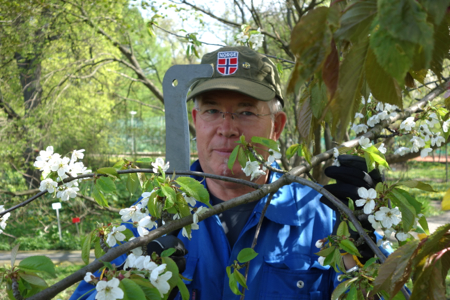 Gathering material in the Botanical Gardens (by coincidence they were about to remodel half of the park and so made plant material available to the workshop. 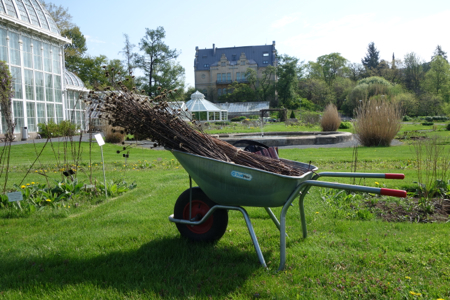 The project also considers what makes an ideal home for the bee as super-organism?  What are the physical conditions that suit bees, rather than those imposed as convenient for human bee-keepers?  How does the hive-mind of a swarm identify, evaluate and select potential nest sites. 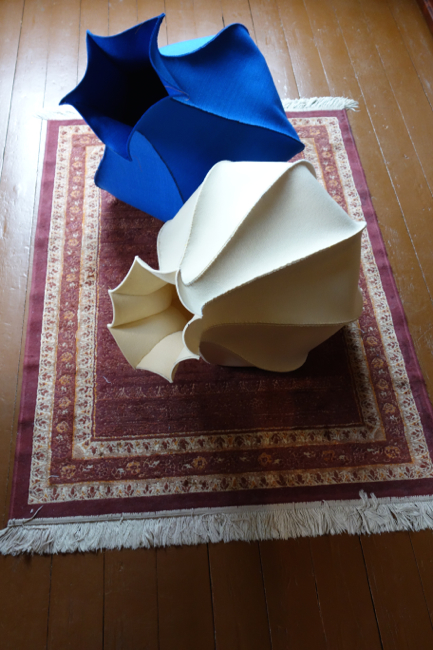 Architecture for Bees and Bees for Architecture is designed as a series of practical and theoretical workshops that investigate these spatial and morphological issues. 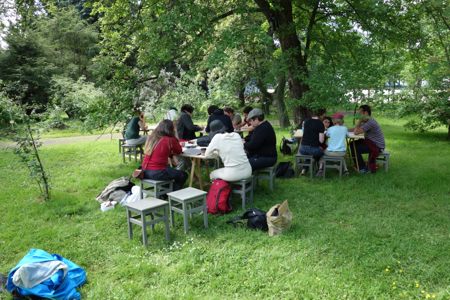 Helsinki weather is kind to us.

The Artist and workshop participants will also engage in the production of new creative works in which Bees co-create architectonic sculptures with the Artist(s) who will reciprocate by designing and building new architectural forms for bee habitation. 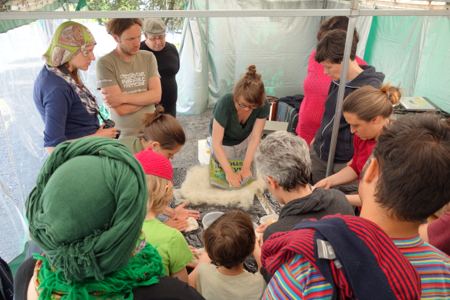 A co-creation in which Bees modify and adapt small architectural structures created for placement inside their hives.

There is a long running BBC Radio classic called Desert Island Discs where each week a radio guest is hypothetically cast away on a desert island and only able to take 8 records, one book and one luxury item (the favourite is chocolate) the programme discussion and playlist is woven around this small collection.

Desert Island Discs has been popular since 1942, appealing to the British to for once abandon stoicism and escape their terrible climate.

The Bees for Architecture concept is a bit more apocalyptic but in a similar vein asks participants to choose a species that they would most like to save from planetary extinction, and then imagine the manner, and the vehicle (a contemporary Noah’s Ark if you wish*) by which to save the nominated critters.

The current project is focussed upon the Honey Bee and calls for a sketch, or a prototype model of the craft suitable for Bee survival.  What kind of structure, vehicle or vessel would work best for the Bee? 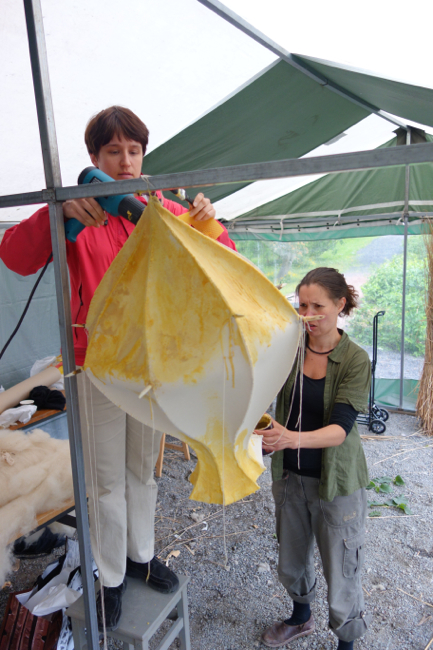 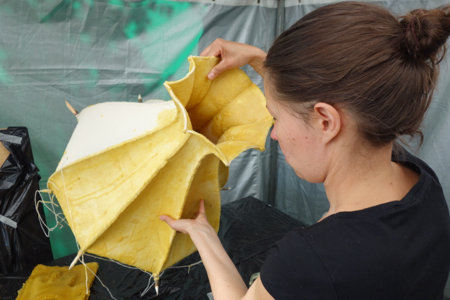 A selection of these concepts will selected to create miniature “Arks’’ which will be placed inside a series of Bee Hives where the Bees will take over to modify, re-build and inhabit these “Arks” generating a hybrid ‘co-creation.’

(*I know it is silly to imagine bees going into an ark two by two ~ even Noah didn’t do this! Actually he didn’t try to save insects, fish or reptiles as far as I know – species which of course account for the majority of the planet’s biomass).

Architecture for Bees.
Bees and Humans have evolved a complex interspecies relationship over thousands of years.  The relationship is asymmetrical and primarily based upon the exploitation of the bee as a source of honey and wax; as a significant pollinator of agricultural crops and intangibly as a metaphoric and ideological symbol – most often harnessed in support of authoritarian, militaristic and industrial world-views that espouse, order, obedience, tireless labour and selfless loyalty, a harmonious and regular world-order.

Architecture for Bees inverts these tropes by seeking to create Bee friendly hive structures that are designed solely for the benefit of the super-organism, rather than the kleptomaniac tendencies of the bee farmer.

Architecture for Bees will create a series of unconventional sculptural bee hives that serve the interests of the bee, whilst of course still providing us with the benefits of pollination and perhaps a playful engagement with some of the significant historical myths and metaphors that mark our co-evolution.

The project will reference a seres of metaphorical and classical myths as the basis for the sculptural hives. 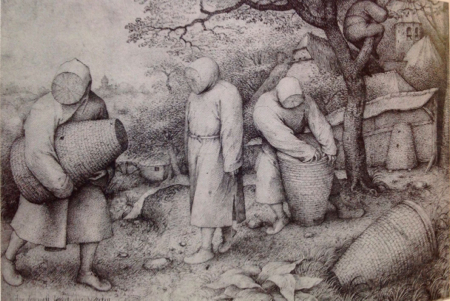 Brugel’s Honey Collectors (or are they thieves?)

This is part of the riddle of Sampson, who on his way to ask for the hand of a Philistine woman (from Timnah) is attacked by a Lion, which he tears apart with his bare hands. On the return route he notices that bees have nested inside the ribcage of the Lion’s carcass (see the illustration on the Tate and Lyle Golden Syrup tin; yes the same Tate as the Tate Gallery!). 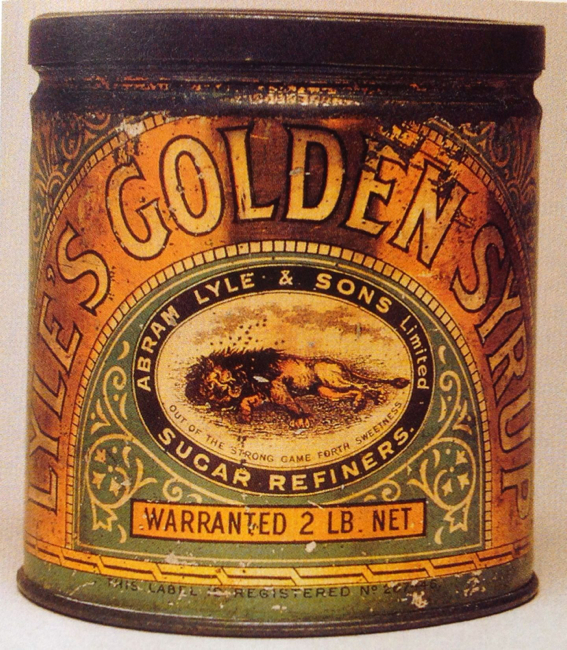 Samson eats some honey and takes the rest to his parents…….
from here the plot thickens!

This old testament narrative has strong connections to the ancient concept of spontaneous generation which proposed that whilst some animals (obviously) gave birth to live young, many smaller creatures were thought to be generated spontaneously from putrefaction, for example insects, frogs and rats from the flooded muddy banks of the Nile, and maggots & from carrion and dung.

This concept originates with the Egyptians who identified bees with Apis, the sacred Bull of Egypt, an embodiment of Osiris, the god of resurrection.  A sacrificial bull, buried was thought to engender new bees and is directly connected to the annual deposition of mud in the Nile Delta.  The Greeks adopted this concept and the name Apis for the Bee (which in Anglo-Saxon English is Beo).

So with animals, some spring from parent animals according to their kind, whilst others grow spontaneously and not from kindred stock; and of these instances of spontaneous generation some come from putrefying earth or vegetable matter, as is the case with a number of insects, while others are spontaneously generated in the inside of animals out of the secretions of their several organs.

As late as1659 the theme linking Bees with the body continue to surface, an example is the poem Plato  by Thomas Pecke.

Those Bees, which chose thy sweet mouth for their Hive, to gather honey from thy works, survive.

It was not until recently, with the discoveries of Louis Pasteur that the theories of spontaneous generation were finally shown to be false and scientific observation gradually revealed the complex and frequently multi-stage, lifecycle of insects and in particular the intricacies of Bee reproduction and formation.

The Wicker Man and the Green Man.
Pagan Celtic Britain has traditions dating to pre-roman times of large sculptural figures constructed from timber and woven willow wands, designed to contain sacrificial offerings (Roman commentators suggest these were human).  These giant Wicker Men were burnt as pagan offerings at the festival of Beltane, a springtime increase ritual held on the eve of May 1st. 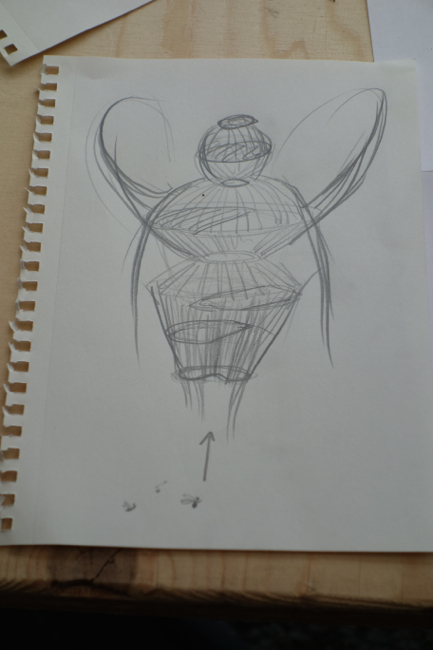 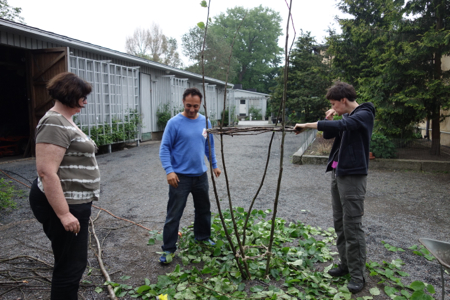 Starting a Wicker Man inspired frame to shelter the felt and wax hive.

Recent research suggest that Roman accounts were biased and whilst human sacrifice may have been practiced it was not at all common. 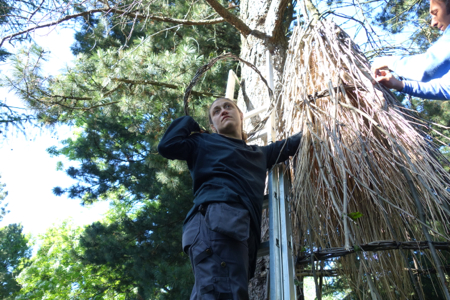 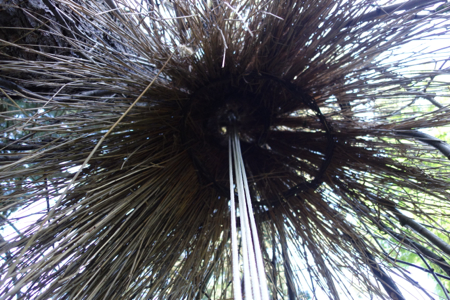 Wicker frame in position, hoisted into a large pine tree.

It seems more plausible that the Wicker Man was related to the cult of the Green Man, a vegetable deity also associated with rebirth and the springtime increase rituals, which focus upon rain and fecundity. 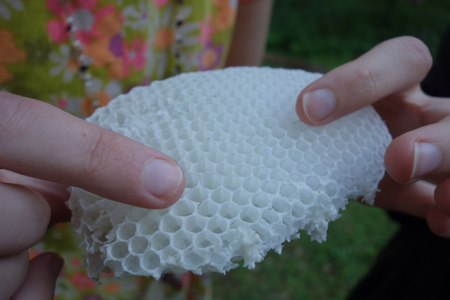 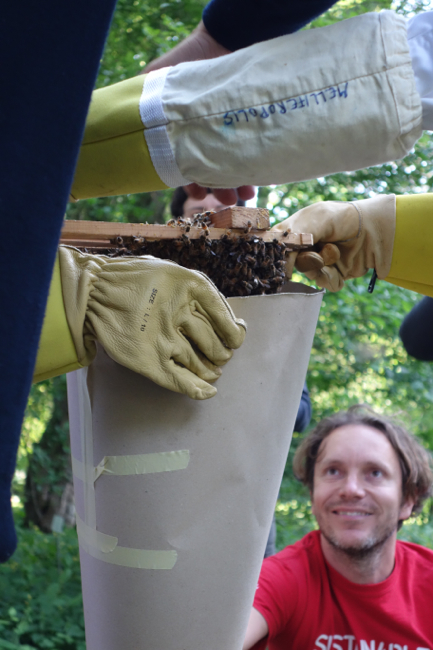 Getting ready to transfer the swarm to the felt and wax hive. 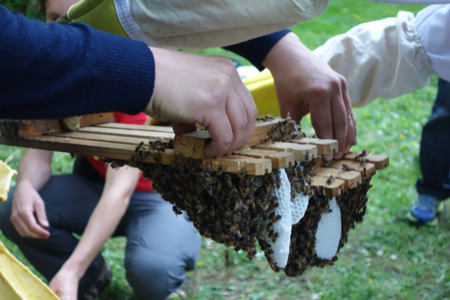 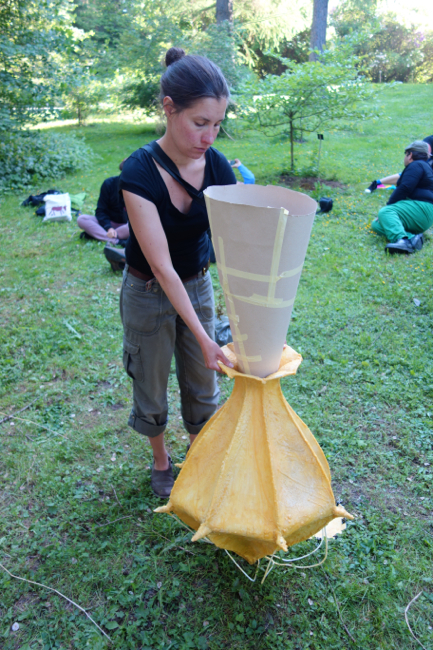 Apart from being a popular name for English pubs, the Green Man was adopted by the Christian church and carved portraits of his face, entwined with leaves are common in church architecture.

Architecture for Bees will fuse these metaphoric sources placing organically formed bee hives inside sculptures woven from branches in the form of these pagan figures, placing the Bees back in their ancient conceptual origin and connecting them with the increase rituals of the ancient world. 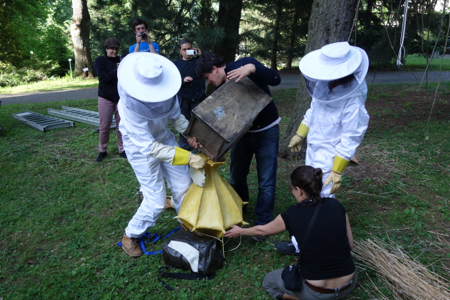 The bees get a new home. 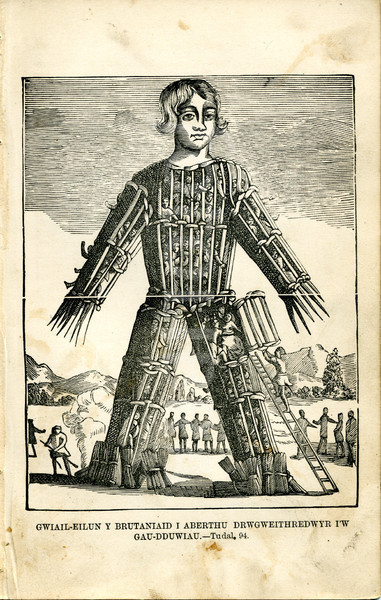 Inside the rib-cage of this wooden sculpture beats a heart that is pure Bee, pure super-organism.  The unconventional hive is intended as a home for Bees and does not allow access to take their honey. The structure that shelters the hive was inspired by the pagan Wicker Man and the Green Man, forest deities that ensure fertility and fecundity. 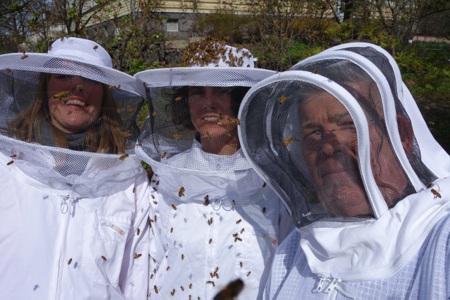