You are here: Home » Lotus

Lotus is a commission for an environmental audio sculpture that is moored in the lake at ECU’s Joondalup campus. 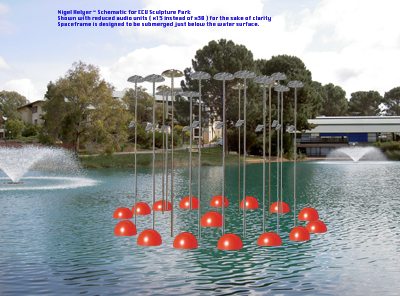 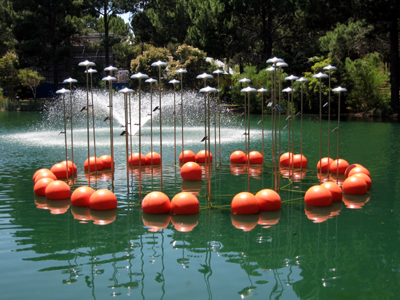 “Lotus” is a development of my previous solar powered environmental audio works and is directly based upon the functional components of “Haiku” but here deployed within a space-frame that acts as a floating sub-structure for deployment in the lake at Joondalup.  Floating the work is a design solution that overcomes the problems of physically anchoring the work on the lake bottom whilst the form also acts as a powerful metaphor for floating water plants. 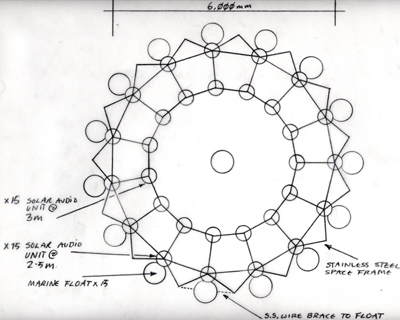 The audio component of this project employs simple and robust solid-state digital audio and solar power to deliver a satisfying complex soundscape, the works embraces the concept of an ‘ensemble’ of multiple forms with minor variations that allows great flexibility in composing elements of the work and helps to develop a sense of continuity inflected with subtle difference.  The units are can be programmed as desired ~ and will broadcast human voice with fragments of poetry.

Lotus contains ten Haiku, one line of each poem being stored in each upright audio unit.  As each unit operates with an individual solar timer/charger the lines are recited at random moments delivering an ever changing random mix ~ in effect comining the ten Haiku into a new ‘Mega-Haiku’. 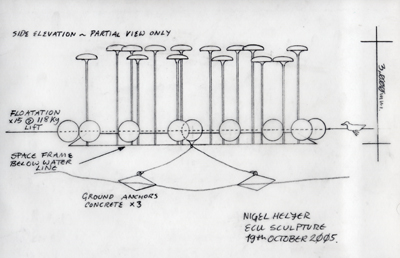 Here are the ten original Haiku:

Heaven and Earth
Convulsing in the same breath
Let fall a tremendous snow.

A giant tree
Rises up into the clouds
On the withered field.

Red dragonflies
Flowing like a ripple
Towards the crimson sky.

A drop of dew
Sits on a rock
Like a diamond.

My mind
Is calm and resigned
As I tread the fallen leaves.

From within the nostrils
Of the colossal Buddha
Comes this morning’s fog.

Like running images
In a kaleidoscope
Humans grow old swiftly.

Coolness
The sound of the bell
Leaving the bell.

Oppressive heat
My whirling mind
Listens to the sound of thunder.

Gargantuan clouds during dog days
Take the shape of a demon
Then change into the Buddha.

A stereo mix to give some idea (sic) of the x30 channel spatial array. 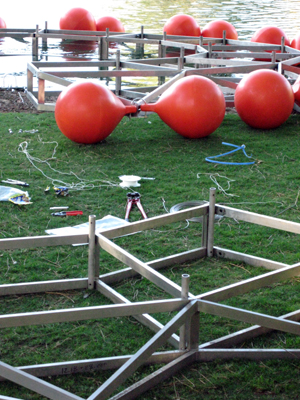 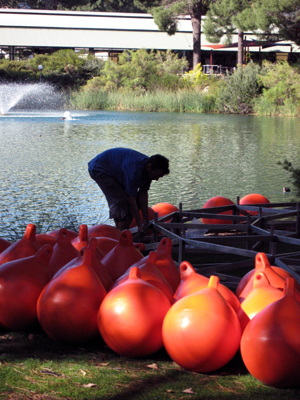 The Spaceframe being assembled with x31 Marine Pearl floats. 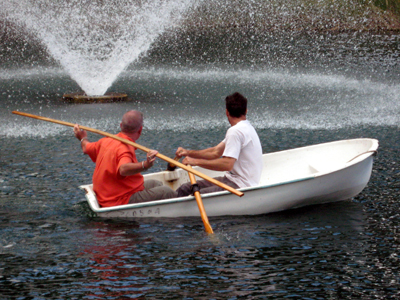 Thar she blows ~ sounding the Lake to establish anchor positions.