You are here: Home » AudioNomad + Syren

The Audio Nomad project is an exciting development in Australian Research and Development that combines the skills and talents of Artists with those of Scientists in an imaginative collaboration that is developing technologies to support and deliver creative public sound-art events.  Our specific interests are in location sensitive, mobile audio systems that generate immersive sound experiences.  Our approach is to mould our research and development around the real world demands of ambitious public art projects challenging more conventional technology driven approaches ~ AudioNomad is creatively driven!

The AudioNomad research programme is a collaboration between the Artist Dr. Nigel Helyer (Sonic Objects; Sonic Architecture) and the University of New South Wales (Prof. Chris Rizos of the Satellite Navigation and Positioning Lab (S.N.A.P.) and Dr. Daniel Woo of the Human/Computer Interface Lab (H.C.I.).  The initial project was co-funded by the Australia Council and the Australian Research Council under an Arts and Science linkage scheme entitled “Synapse”. 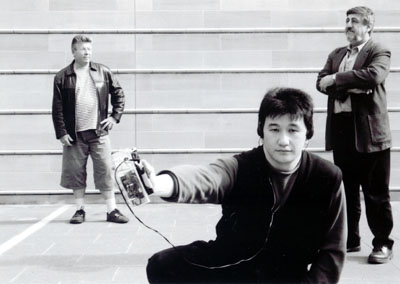 The public debut of AudioNomad, a project, entitled “Syren” was a major feature of ISEA 2004 (the International Symposium of Electronic Arts) held during August in Scandinavia.  “Syren” was mounted on the observation deck of the “Opera” a large Baltic cruise liner on a voyage between Helsinki, Stockholm and Tallinn (with the ISEA symposium on-board) and produced an immersive ‘surround-sound environment directly linked to the ships position and the geographical features near the ships passage (for example islands, light houses and port side architecture).  “Syren” ran for three days, contained literally thousands of sound files and doubtless set a record as the worlds largest sound composition! 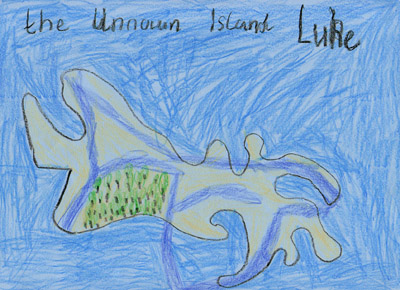 As a part of the audio content development Nigel worked with primary school children, asking them to imagine and describe distant Northern cultures, an ironic commentary on the fanciful accounts of Terra Australis generated by the earliest European navigators.

The technology that we are currently developing allows us to plot sound-files (i.e. audio content) onto the features of a digital map (in this case of the Baltic seaways and the ship’s route).  GPS tracking in effect turns the ship into a giant ‘cursor’, which moves through this software map, turning sound-files on and off, rendering sounds in the appropriate relative position to the ship and its motion.  Thus, a person situated within the array of surround sound speakers is able to listen to a soundscape, which appears to emanate directly from the seascape features that the ship is passing.

Thus, for example, as the ship approaches a light-house a fragment of conversation, or a musical work may appear in the appropriate direction and with appropriate ‘distance effect’.  As the ship passes the feature, the sound will fade in volume and will alter its position relative to the ship (i.e. the sound will drop away toward the rear of the ship). 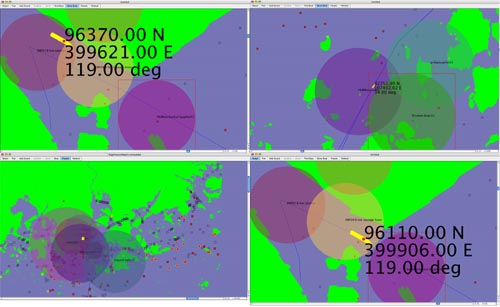 Simplified screen images from the spatial audio editor interface developed for “Syren”.  The small yellow object is a scale representation of the cruise liner “Opera” tracking through the Finnish archipelago, the numbers represent the ships heading and position.  Circular objects represent the position of ‘sound-stacks’ (groups of audio files) with the circumference acting as an on/off trigger activated by the ships position.

The AudioNomad team developed a second version of “Syren” a shipboard location sensitive, immersive audio experience, specifically tailored for Sydney Harbour and run in parallel with the “New Constellations” conference on Art and Science collaborations at the MCA during March 2006.  This new incarnation the project was designed to integrate closely with the conference programme and provide a lucid example of creative new media operating in the public realm.

“Siren for Port Jackson”  demonstrated our work to future potential partners (e.g. The Sydney Festival, Sydney Ferries and State and Federal agencies) with a view to developing an awareness of the growing importance of location based media and the potential for fruitful Art and Science collaborations.

The surround sound speaker array comprised a circle of 12 small high quality Bose audio drivers and two sub-woofers,  mounted in the main salon of a ferry ~ an LCD cinema display screen (30”)  displayed the current track of the vessel through the ‘sound chart’ and demonstrated the software editing/composing system.  The installation was be ‘crewed’ at all times by members of the AudioNomad Research Group in order that the concepts and technologies behind the project were explained to members of the public.

The vessel was fitted with a small external antennae mast carrying a highly accurate GPS unit and a digital compass ~ our system being stand alone, do not require any navigational input from the ship’s system, nor do they interfere with the ship’s navigation.

The project delivers a fully immersive surround sound experience, but with a powerful difference, all the sound content is specifically designed to ‘reside’ in geographic space and appears relative to the ship’s position and speed.  For example the sound of a naval jig being played from Fort Dennison begins to appear as the ferry approaches the island, increases in volume as the vessel draws alongside and then fades as the island passes astern ~ all the while the sound ‘pans’ from the bow to the beam to stern position, exactly in synch with visual contact.  Passengers are thus able to link the sonic experience in the cabin with the visual experience both in the physical surroundings and as represented in the virtual sound chart.

Our approach was to consider Sydney as a ‘working harbour’ developed across an historical axis.  Sound material was collected from a wide variety of sources and voices ~ ranging from contemporary tug crews on duty, water police patrols and visiting ships ~ to recordings re-enacted from historical ships logs, maritime archives, early radio archives and material drawn from the archives.  Vocal narratives were composed together with historical musical pieces and sound atmospheres (weather, sea and other natural history audio).

The ‘pilot’ version used a small private vessel hired for three days, which gave the added advantage of being able to specify the vessels track and therefore providing a high level of control over the nature of associated landscape/seascape features forming the underlay of the audio composition.

Future versions wouldl ideally be mounted on public ferries, as their routes are obviously be more or less pre-scribed the task of editing and composing would be reduced to a geographical ‘lane’ extending possibly some 100 meters either side of the vessel’s nominal track (to allow for local variations in course).  However this does not mean that on each ferry trip the composition will be identical.  On the contrary, the “Syren’ software compositional system has the ability to introduce variations in content depending upon (for example, the direction of travel, the time of day, the depth of water under the vessel’s keel and so on).  This powerful ability, that functions in real-time, ensures a rich and engaging surround sound experience that is a quantum leap in both quality and delivery from previously experienced ‘canned’ audio tours.