You are here: Home » Oracle

Exhibited.
The Museum of Contemporary Art, Sydney 1995 as part of the “Sound in Space” National Sound Art Survey exhibition.

Notes.
Oracle is situated within an energetic field in which sound is inescapably linked to the prosaic operation of power – Sound the co-habitant of Power and Power, the matrix of Sound . From a sculptor’s perspective sound is indexically linked to the tangible, acting as our sensible link to the dynamic systems, which constitute our world. 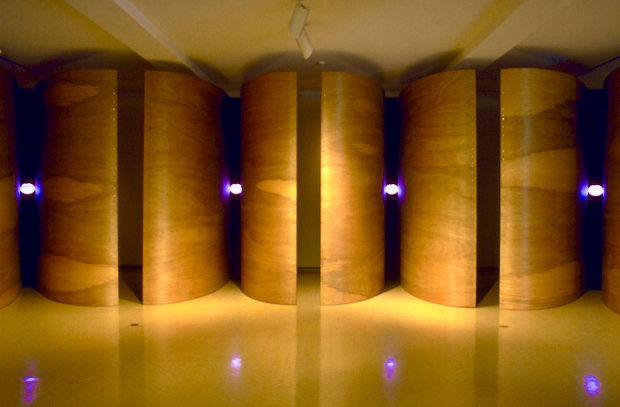 But paradoxically sound simultaneously presents and supports both Virtual and Actual worlds; at each turn sound behaves as both manifestation and representation. It is an agency which not only engulfs the surface of our physical being, but one which enters our fabric to literally re-create the pressure field of the environment within our perceptual mechanisms. Metaphysically sound is the bridge which links concept, agency and event – its anthropomorphic form is the voice!!!

And the Lord said unto Joshua, See, I have given into thine hand Jericho, and the king thereof, and the mighty men of valour. And ye shall compass the city, all ye men of war, and go round about the city once. Thus thou shalt do six days.

And seven priests shall bear seven trumpets of ram’s horns: and the seventh day ye shall compass the city seven times, and the priests shall blow the trumpets. 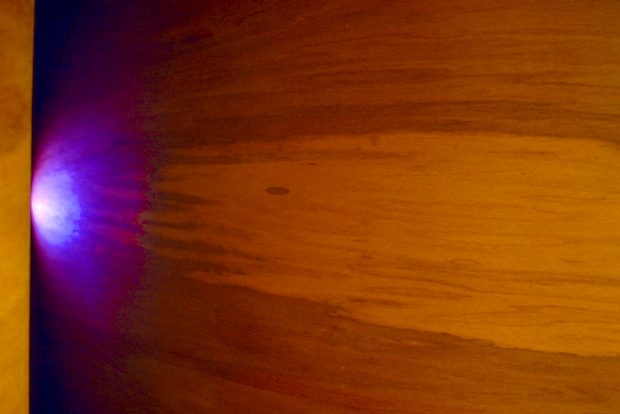 And it shall come to pass, that when they make a long blast with the ram’s horn, and when ye hear the sound of the trumpet, all the people shall shout with a great shout; and the wall of the city shall fall down flat, and the people shall ascend up every man straight before him.

The city razed by sound, but listen closely, its is not the fanfare of trumpets, but the sound of a great shout, the sound of the voice, a shockwave of human resonance, which topples architecture. We are sounding bodies the greater part of our knowledge of sound is formed directly in relation to the sounds issuing from our own frames – principally through the voice. Vocalisation in this context may perhaps be the originary projectile.

Historically the walls of Jericho would operate as an archaic defensive structure, designed to resist exterior force and by the act of marking out an interior space function to underwrite the differentiation of culture and identity within the city-state. A unique identity would be conferred upon those who dwelt within such ramparts. The Walls of Jericho should have acted as sound baffles – reflecting and rebuffing the sonic assault as they would arrows and lances. That they failed to do so in this allegorical narrative makes clear that the phenomena of sympathetic resonance was recognised in ancient times. In this, albeit improbable, scenario it is noteworthy that the power of an earthquake has been conferred upon the voice declaring it as both an instrument of raw power and as a vehicle of political expression. 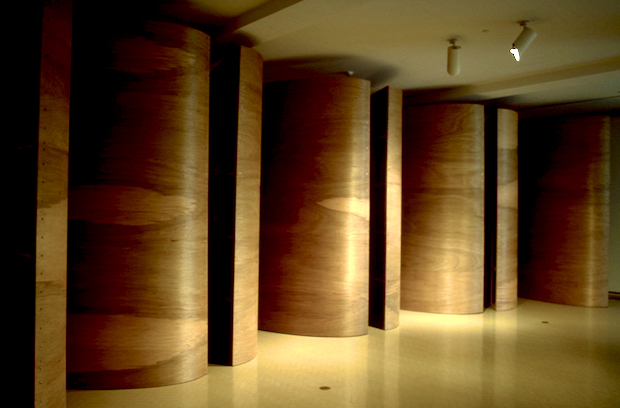 Within the architectural formulation of Oracle the function of the defensive wall is inverted, as auditors, perhaps we should consider ourselves as the citizens of an interior space, citizens of a new Jericho, now addressed directly by the city wall. The very fabric of the city is re-formed (in an image of telematics) as an architecture of transmission and prediction and is pressed into the service of a king? the state? corporate culture? 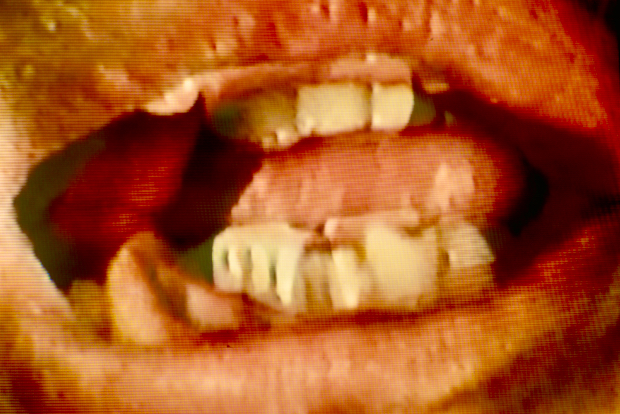 Without the loudspeaker we would have never conquered Germany”

Hitler in the Manual of German Radio 1937.

Although the walls of Oracle voice enigmatic prophesies (to be precise 35 prophesies extracted from the work of Nostradamus) this is speech deflected upon itself, dealing, as it does, with dissolution, with conflagration, with arrangements for its own disappearance. Here the threat of erasure is not posed from without, but is embedded within the very heart of the system.

A singer who sings like a bird is an unproductive worker. When she sells her song, she is a wage earner or merchant. But the same singer, employed by someone else to give concerts and bring in money, is a productive worker because she directly produces capital.

The grain of a Russian tenor is….directly the cantors body, bought to your ears in one and the same movement from deep down in the cavities, the muscles, the membranes, the cartilages, and from deep down in the Slavonic language, as though a single skin lined the inner flesh of the performer and the music he sings.

Roland Barthes, The Grain of the Voice.

The work is designed to both voice and breath, in a juxtaposition of voice and architecture the walls are required not simply to convey meaning, in terms of what is spoken but to take on the physical characteristics of a body that speaks, and so becomes an architecture that breaths. The ebb and flow of the low frequency tones, which underpin the voice, induce the entire structure to tremor in surges reminiscent of lazy surf, or the transpiration of a giant beast.

My basic theory is that the written word was literally a virus that made the spoken word possible……..The word has not been recognised as a virus because it has achieved a state of stable symbiosis with the host.

If language is in fact a viral modification of human physiology (modifying the larynx of our simian forebears) and psychology as Burroughs maintains – then the word, as the analogic form of thought, is too an infectious substance:- populating, migrating and colonising across vectors of space and time. The visions and auditions of Nostradamus – memorised across time as text are replicating themselves here as a viral contagion.