You are here: Home » Dual-Nature (Ebb and Flow).

Exhibited.
Dual-Nature is Australia’s first solar powered, permanent Public Sound-Sculpture. It was commissioned by the City of Sydney for the Sculpture Walk and was installed in Woolloomooloo Bay, Sydney, December 1999. 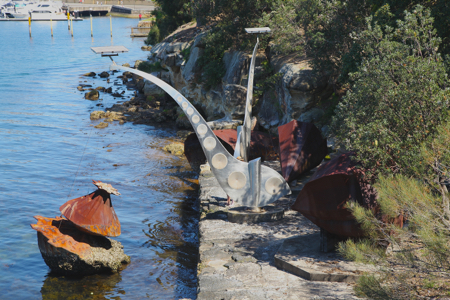 It is as if Mother Nature had overstepped her bounds and formed an alliance with Industry; or indeed, the foundry men in the Naval workshops had turned their hands to Marine Biology.

These hybrids of marine, industrial and natural forms closing to the shoreline of Woolloomooloo Bay like abandoned hulks reflecting the maritime and cultural history of the site.

Partly submerged at high tide the water-based sculptures are intended to act as a natural reverberation chambers. These ambient sounds mix with the pre-recorded soundscape located within the land-based sculptures. Entitled Ebb and Flow the soundscape relates to the history of people and shipping flowing in and out of the bay. 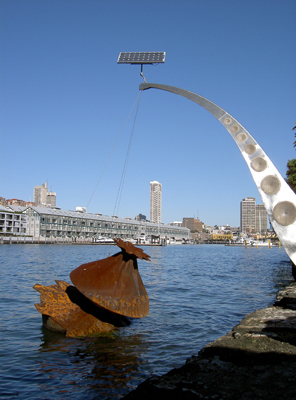 The ambience of Woolloomooloo Bay is formed by a confluence of natural history interests, located in the Domain and Botanic Gardens which form one side of the bay and by the military/industrial activities of the Federal state on the other.  In essence the waters span a duality between nature and industry.

That these waters support the navigation of both the Navy and the Citizenry is unique and invokes a further doubling of the tidal metaphor of Ebb and Flow.  The bay is a site of Ebbing the point of departure for thousands of Australians and hundreds of Australian ships, mobilised in the interests of Empire, marking a site with many departures but sadly fewer returns. 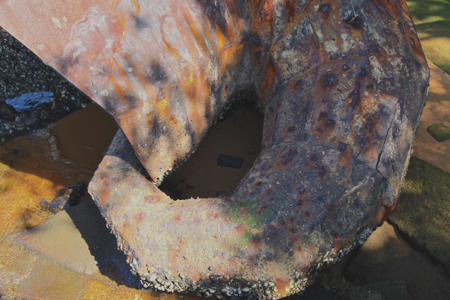 But these waters are also the recipient of Flow a place which received thousands more souls, travelling on ships as new emigrants to Australia, there is an ironic balance here, a flux in the nature and identity of our culture.  The metaphor of Ebb and Flow is developed as a significant leitmotiv within the work both as a sculptural trope and as a keynote within the sonic treatment. 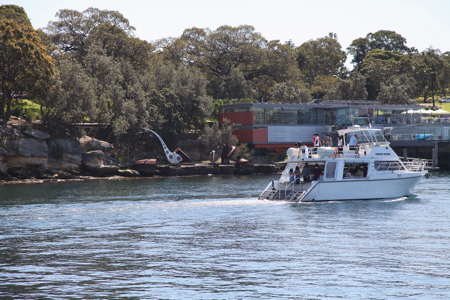 Dual Nature is designed primarily to be a hybridisation of forms derived from natural history, marine architecture and industrial structures.  A second key factor is commensurate with my practice as a sound-sculptor – the proposed work combines a sculptural presence with a soundscape working together in a strong synergy. 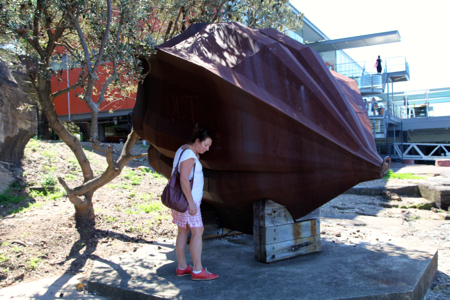 At the core of the work is a series of four sculptural objects, which meld marine shell forms with industrial structures and fabrication techniques.  This typology of spherical and conic forms co-join the growth spirals of nature with the more ominous engineered marine types found in submersibles, sea mines, etc. 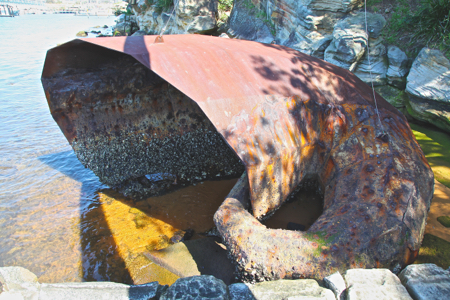 Two of these shells are positioned on the rock ledge of the foreshore so as to be partly submerged at high tide but predominantly exposed at low tide.  They are constructed as compound curved objects from 10mm mild steel plate (folded and welded) being designed to slowly corrode and become encrusted with marine growth. 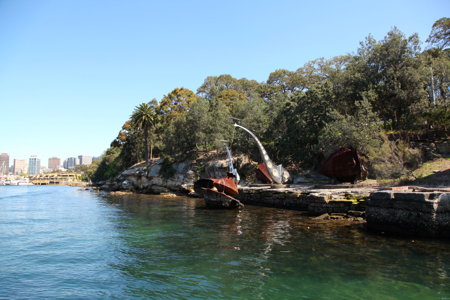 A stainless steel derricks, or cranes, mounted at the edge of the stone platform are linked by steel cables to each shell object in order to provide a visual metaphor, of retrieval or launching, thus forming a strong referential link to the maritime history of Garden Island.

These semi-submerged shell objects are intended to act as natural reverberation chambers endlessly changing tone as the tide gradually fills and empties their interiors. 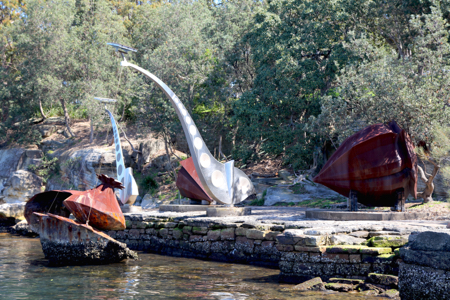 A second series of two shell forms rest on the old sandstone structure (once the platform for the “Figtree Baths”).  These structures, are intended as a strong reference to the shipyards across the bay, complimented and extended by the incorporation of the ebb and flow soundscape installed within each of these land mounted structures.

The Ebb and Flow soundscape is composed from multiple interwoven elements of voice narrative drawn from the historical context of Woolloomooloo, addressing in particular, the constant flow of people and shipping.  Historical material has been drawn from textual records and wherever possible from sound archives.  The soundscape is digitally stored in solid-state audio chips and designed to operate as an infinite mix (i.e. non-linear and thus non-repetitive soundscape).  The audio systems are physically incorporated within the sculptural objects as stand-alone units and are powered by solar panels mounted at the tip of each crane element.