Notes.
Die Melodie was a very large sound-structure (mixing a strong kinesthetic and sculptural statement with a high level of culturally located audio-texts). 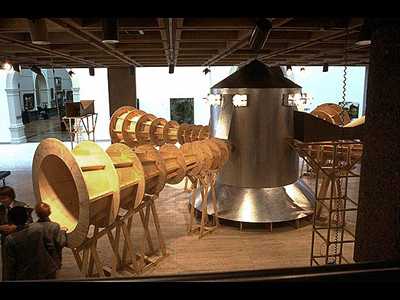 In its generation the work issued more from a seedbed of ideas and interests in history (not Art History I should add!). The main conceptual framework developed around some seemingly disparate historical and political events, principally Roger Bacon, the 12th century English alchemist. Bacon is reputed to have invented gunpowder, spectacles, but of particular interest, an Automaton, a talking head which possessed oracular functions – a kind of medieval early warning device. Compressed alongside Roger Bacon are two movies and two symphonies. The movies share a common production date and were of interest for their divergent sentiments (or so I then assumed). 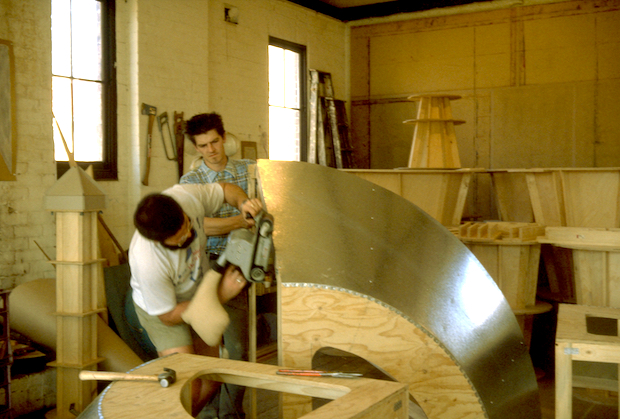 Working in the studio.

The Wizard of Oz lent the work the central head motif (from the Tin-Man, which links tangentially with Bacon’s talking head). The second movie is Eisenstein’s Alexander Nevsky (with musical score by Prokofiev). Alexander Nevsky was made in 1937 to warn the Nazi’s to stay away from the Soviet Union, it depicts the 12th century conflict in which the Teutons are repulsed, catalysing the emergence of the Russian nation. 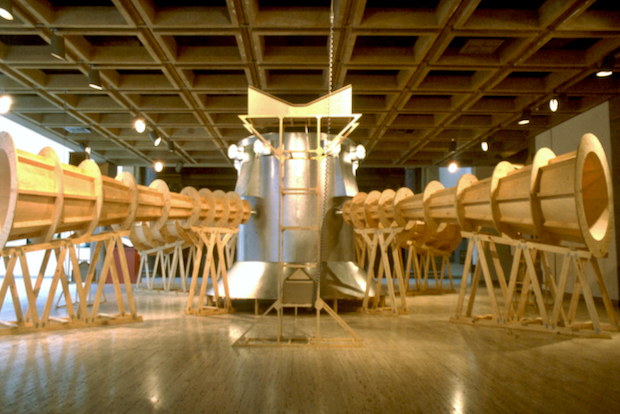 The music of Prokofiev was specifically designed to characterise the aggressive qualities of the Teutons (he intentionally used faulty recordings of Germanic horn music to achieve this) and emphasise the robust nature of the Soviets, (including many folkloric themes). As it happened Hitler and Stalin signed a non-aggression pact, and the film withdrawn from circulation. There then followed the invasion of Russia by the Nazis and the inevitable re-release of Alexander Nevsky!!! 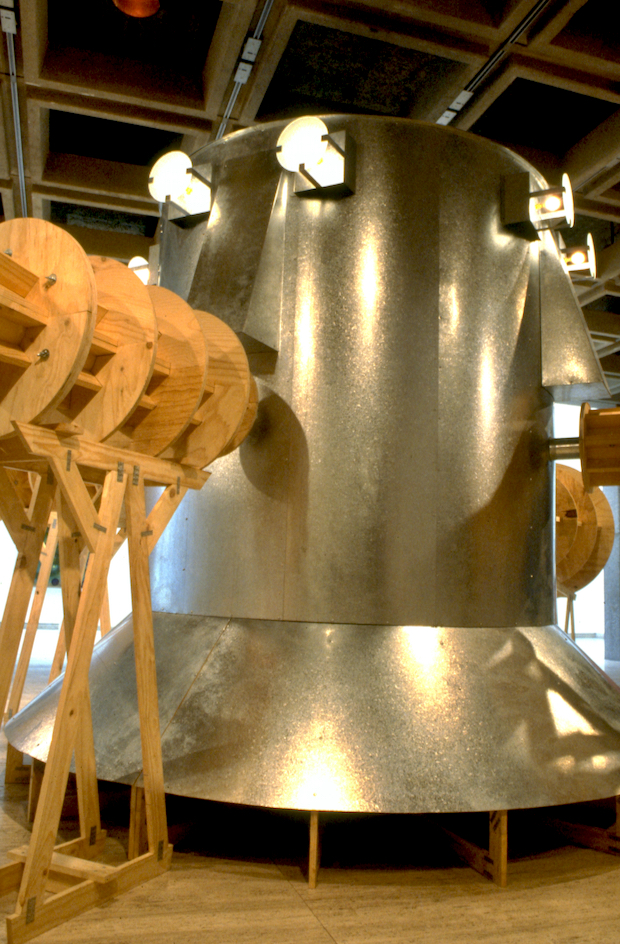 The Tin-Man and Brazen Head co-joined.

In this work the central head/oracle, with its four faces, transmits (through the four enormous horns) the first two bars of Beethoven’s Fifth Symphony. These two groups of four notes approximate to the Morse code letter “V” and were used by Radio London throughout World War II as a Victory call-sign beamed at occupied Europe (sweet irony!). Standing in the intervals between these speaker cones are four radio-towers from which issues computer modified loops of Prokofiev’s sentimental Russian themes. 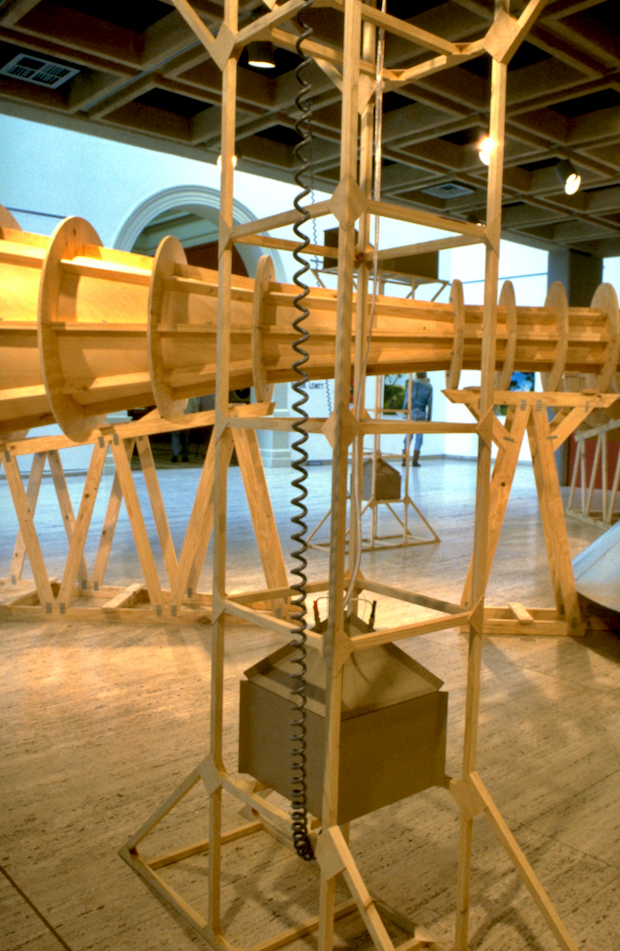 Detail of one of the four ‘Radio Towers.’

Thus in some way my job has been to de-contaminate works previously hi-jacked to serve political agendas. I get to re-insert them into the world of poetics! Also with regard to the material which the work references, it is simply not a form of post-modern quotational drifting. Rather I see it as a form of cultural and historical research which puts together disparate strands in order to synthesise meaning. At the bottom line I regard Post-modern practice as an act of bad-faith, characterised by a loss of focus, as an artist I recognize a responsibility to achieve work which extends beyond stylistic manipulation, into areas of philosophical and poetic “work” which must be located within a social context in order to find “traction”. 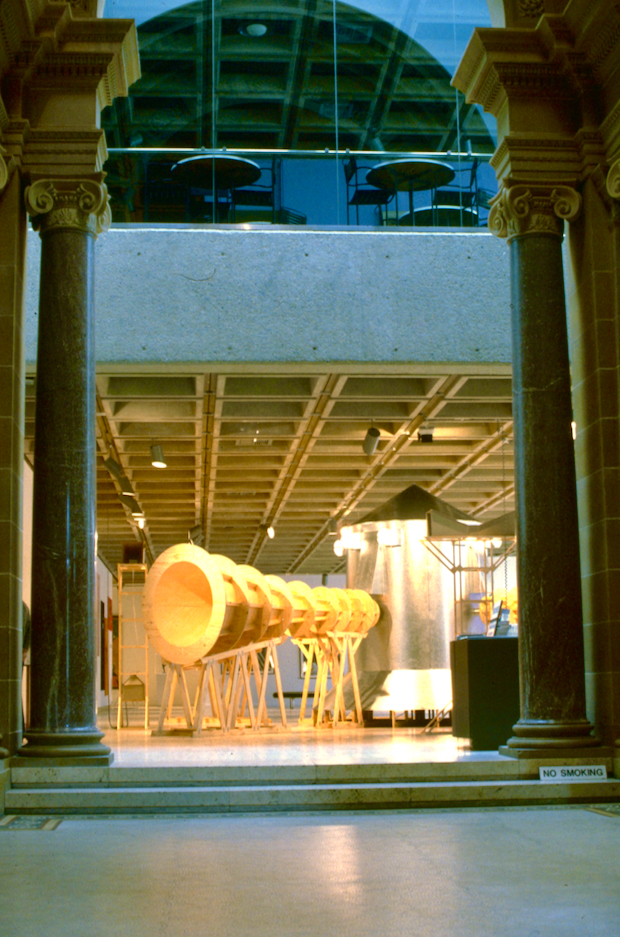