You are here: Home » The Deluge Ark(ive)

The Deluge Ark(ive) exhibition comprises an exhibition, the launch of an Artist’s book and a performance event at the new Moonah Arts Centre in Hobart, Tasmania (16th November to the 16th December 2017).

The project arose in a curious manner.  Some three years ago I was engaged by Sabanci University in Istanbul as a visiting artist and professor with a mission to develop and exhibit a new work based upon creative research in the Black Sea that concerned the pre-historic Deluge, that indeed flooded through the Bosphorus raising the water levels of what is now known as the Black Sea by some 147 metres. 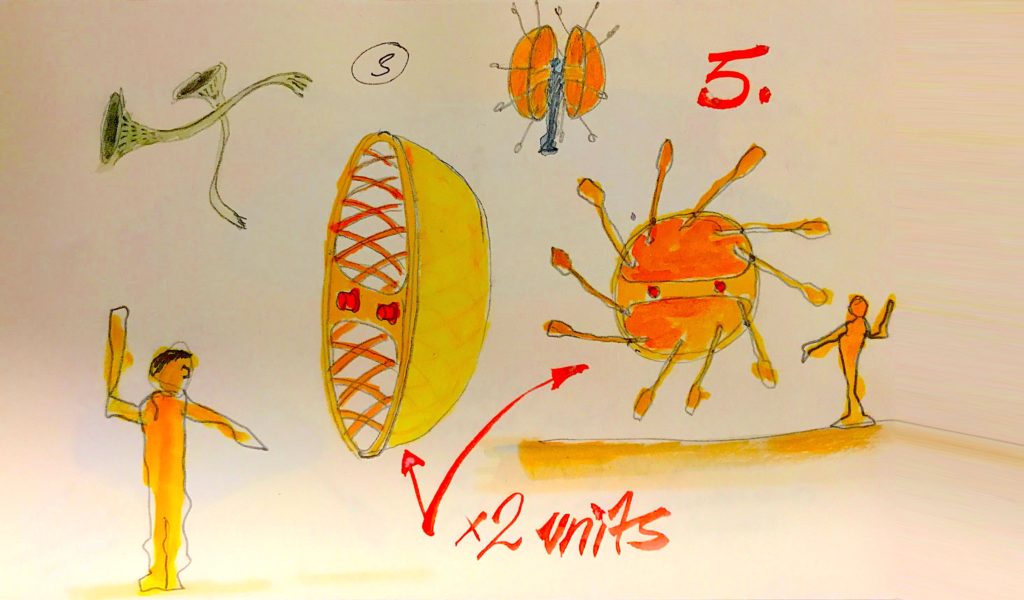 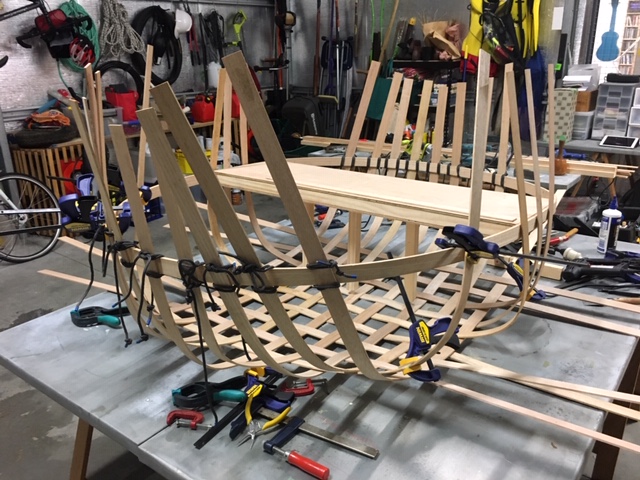 “Diatom” in progress in the studio.

As fate would have it my travel plans were dashed by a confronting medical diagnosis which drastically restricted my movements and extinguished my hopes of adventures into pre-classical history.  However my fascination with the narratives of the Deluge drove me to re-structure the project into an imaginative, ficto-critical text which has then driven the creation of the six new sound-sculptures that form the current exhibition. 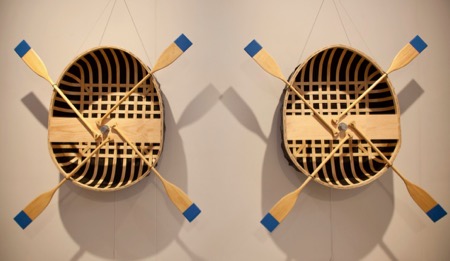 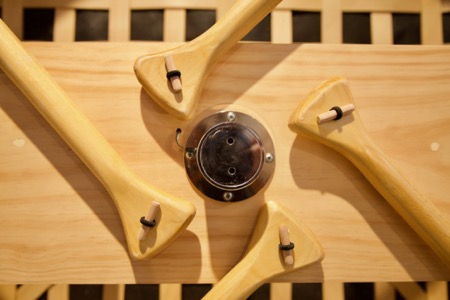 The Deluge Ark(ive) – exhibition notes.
Thirteen thousand years ago our ancestors were witness to a catastrophic event. The ice began to melt; the oceans began to rise and the land to flood, an environmental apocalypse irrigating the myth-memory of human consciousness. 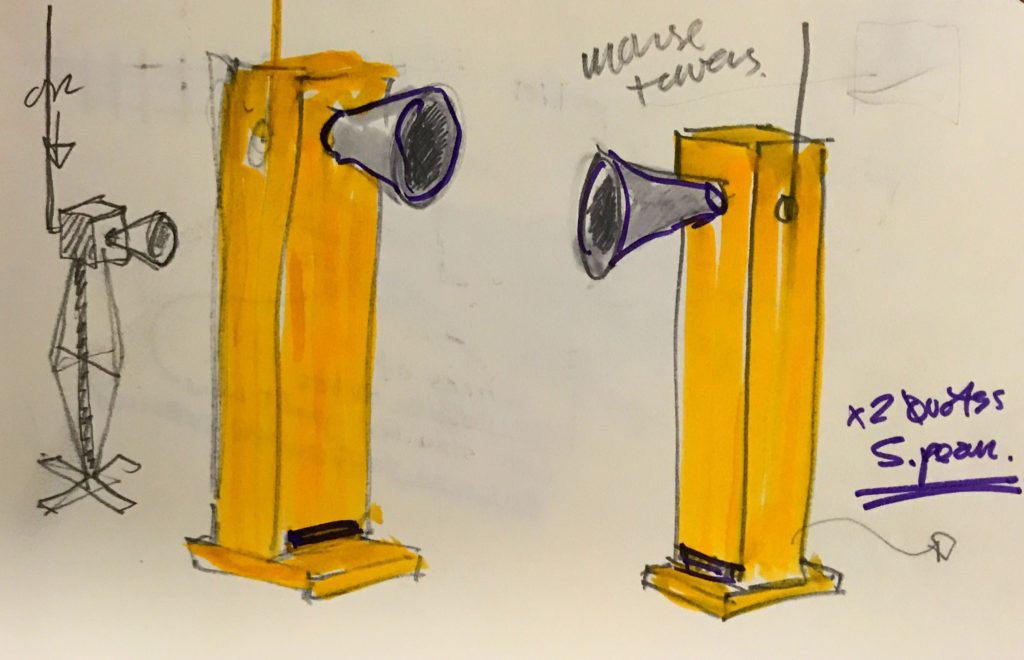 Our blood and our tears have the same salinity as the ocean. It is a reminder of the origin of all life on the planet and a warning that we share our well-being with our vast and indifferent mother. 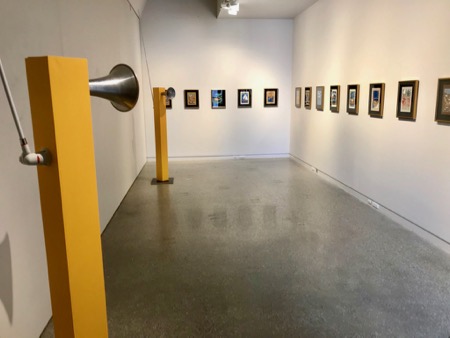 “Tempest” installed with the illustrations form the Deluge Ark(ive) book.

The Deluge Ark(ive) exhibition presents these Oceanic narratives as a series of sound-sculptures which in turn take their inspiration from a novella written by the artist to explore the deep relationship we share with our marine origins. 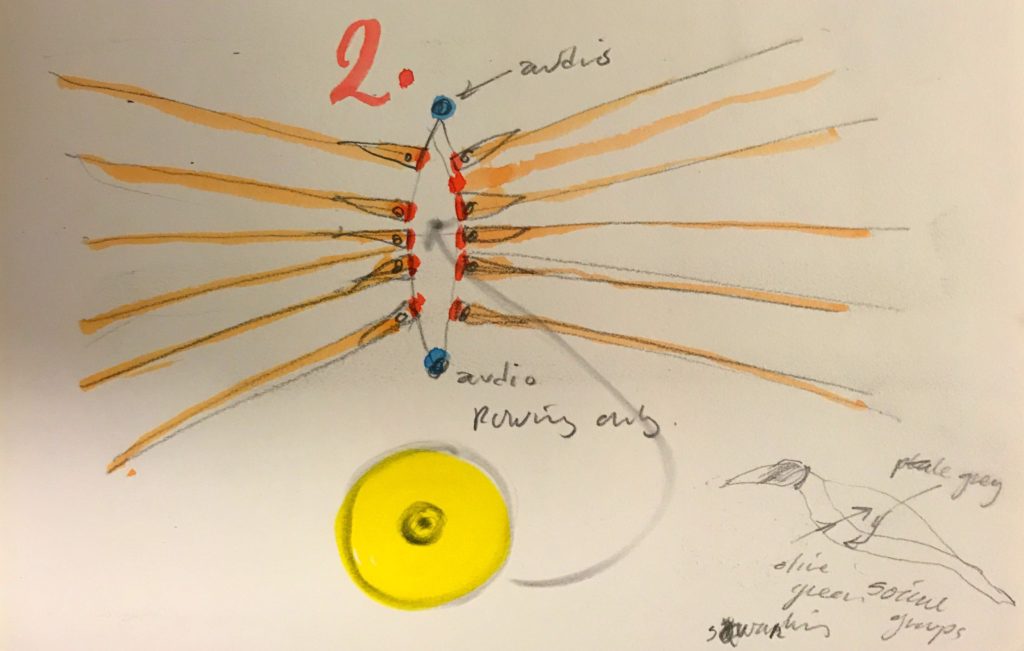 The exhibition was accompanied by a performance event, based upon my on-going collaborative relationship with scientists at the Institute for Marine and Antarctic Studies, with musical scores derived from bio-logging data collected by my scientist colleagues at IMAS that document the extraordinary under-ice dives of Southern Elephant Seals in the Antarctic. 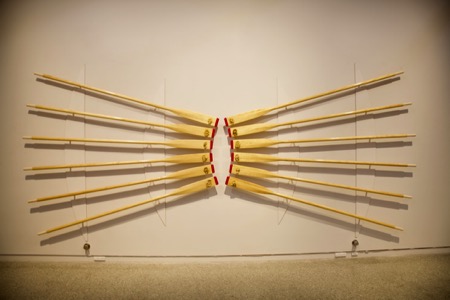 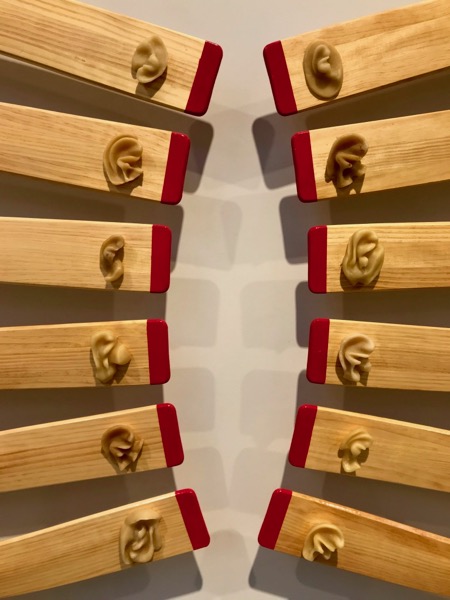 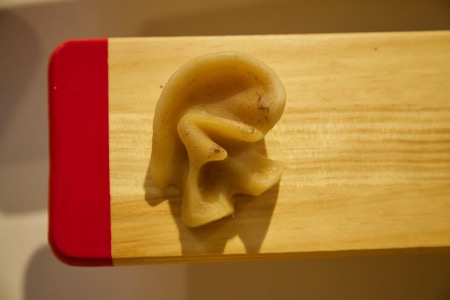 Heart rate and breathing data, as well as Oceanographic measurements was be used to produce graphical music scores for the Sisongke Choir to interpret and perform. 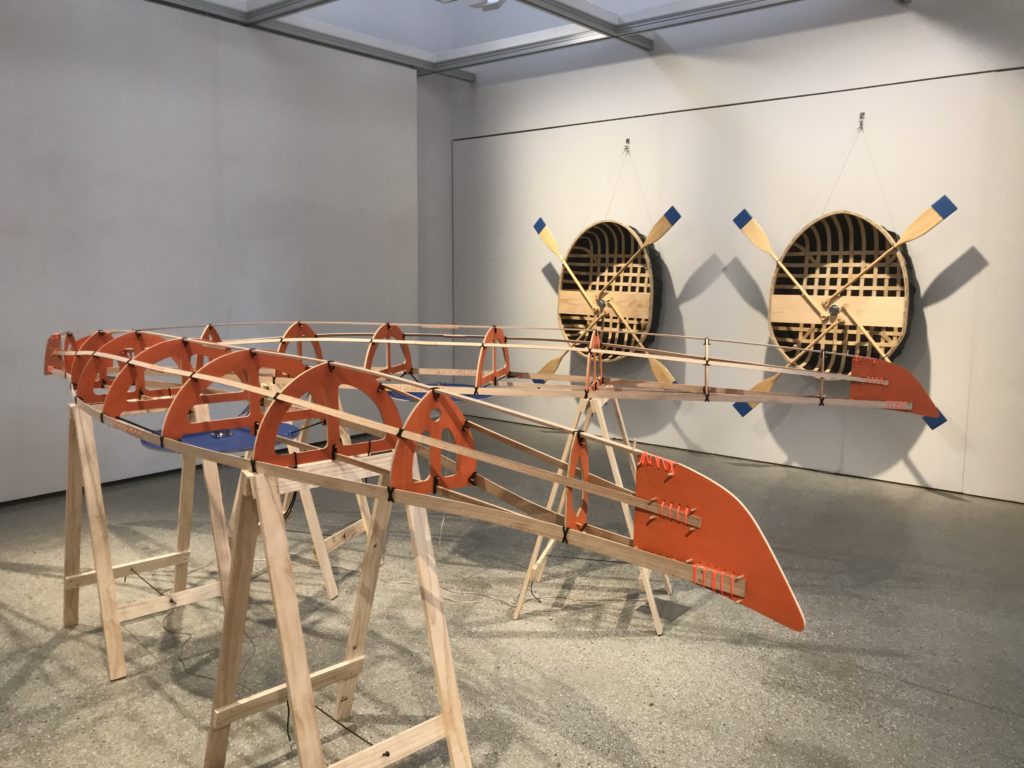 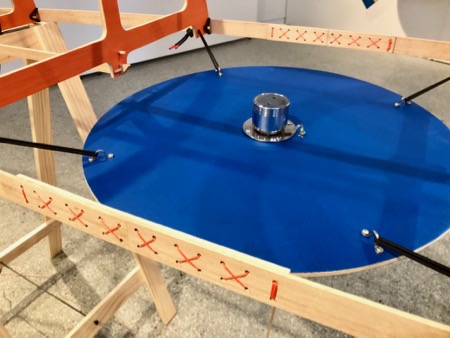 The evening will also showcased a composition for a quartet of 30-note music boxes with a score derived from marine data as well as a audio-visual documentary of the previous jazz interpretations of Antarctic data sets. 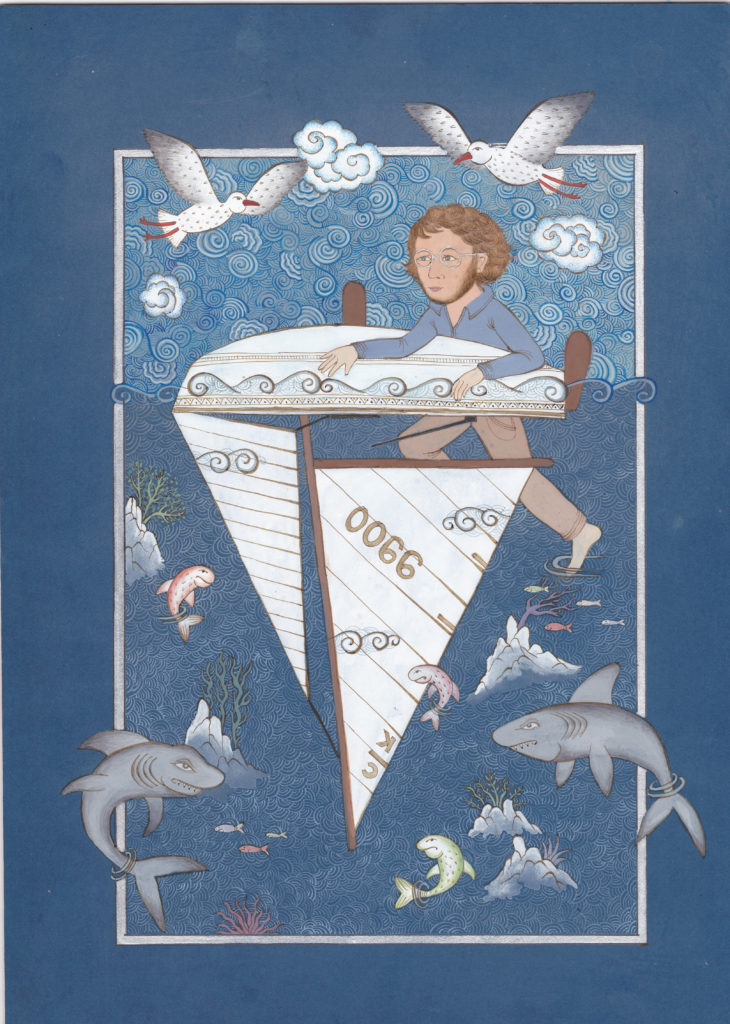 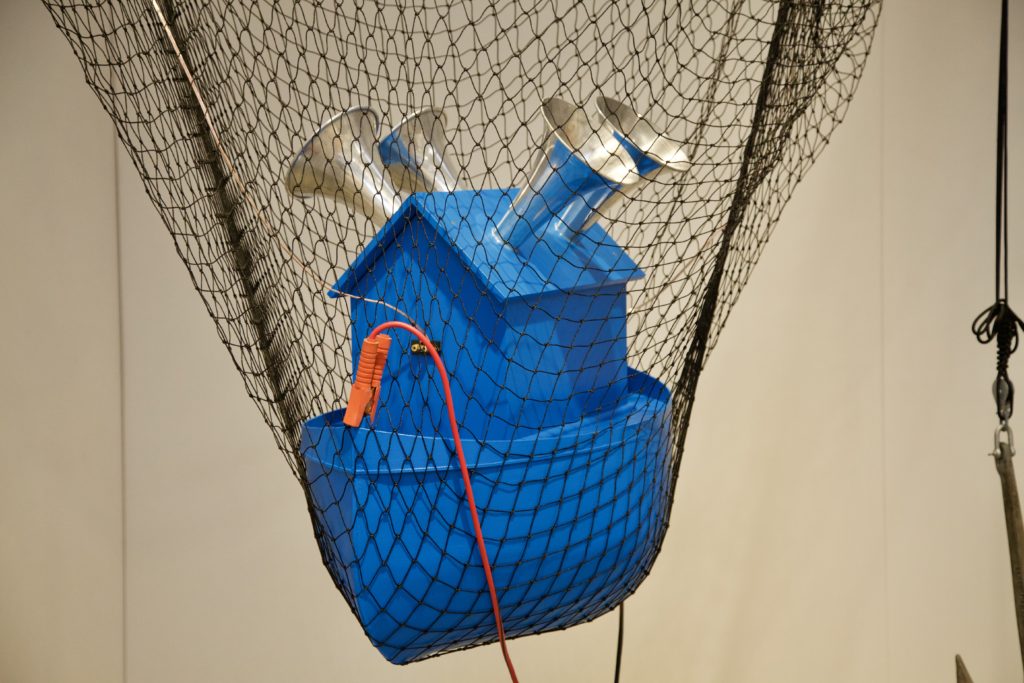 deluge from Nigel Helyer on Vimeo.

A sample from the novella “The Deluge Ark(ive) a small atlas of voyages.” of the limited edition hardcover Artist book with its seventeen beautiful Turkish miniature paintings

The present overwhelms the future.

Abe and Yugi, lay back in the sunshine on the second floor terrace of the whaling company’s age-care complex, chatting to one another from their beds about the good old days, of firing harpoons and flensing blubber, well before those Western eco-hypercrits ruined everything – yes, those were the glory days. Their wrinkled faces, animated by happy memories, slowly soften into the contented sleep of old men with mythic pasts.

Some say the wave was twenty-five metres high as it hit the rock armoured sea defence wall. Recently built by the Töhoku prefectural government and opened with typical fanfare, the massive concrete and stone structure disassembled itself instantaneously. The wave gathered up the whale chasers, with their towering bows, the sleek white long-line tuna boats and the ink-smattered squid boats, with their rows of giant incandescent lamps, and sent them all into the commercial centre of the city to find new moorings next to banks and office blocks. There they lay, stacked alongside trucks, small houses and harbour cranes like the giant toy box of some ill-disciplined supernatural child.

Up on the second floor terrace Abe and Yugi doze in the sunlight until once more they become seafarers. The wall of water funnels through the town and races uphill to the age-care centre, slamming through the lower story to surge out of the upper floor. All souls below are instantly crushed or drowned but Abe and Yugi are sluiced from the terrace in the backwash, gripping their waterproofed hospital mattresses, and hurtling like whitewater canoeists through a slalom course marked by floating Suzuki vans and signs from Karaoke bars.

Abe and Yugi are assumed dead, until, to the amazement of his family, Yugi is identified in one of the temporary refuges for displaced persons three days after the tsunami. He had clung to his mattress for dear life and finally drifted into a tree top where he remained until the floodwaters subsided. Yugi, still tough and wiry from all his years at sea, wandered around in a daze for a day and was then picked up by a rescue crew. Now warm and full of miso soup, he is reunited with his kin.

No-one ever heard of Abe again. He rode the torrent back out to sea, drifting rapidly South-East. Despite his age, he too was as tough as nails, scooping fragments of seaweed from the ocean and lying back with his hands cupped around his mouth to catch raindrops. This is what it feels like to die Abe decides, craning skyward during a brief shower, mouth agape, droplets falling into the darkness of his throat. He lasts a couple of weeks but he knows his luck is out. All the rescue teams in Japan are on the devastated coast, not way out in the Pacific. His plasticised mattress eventually joins the millions of pieces of synthetic flotsam slowly orbiting in the North Pacific Gyre.