You are here: Home » Chant 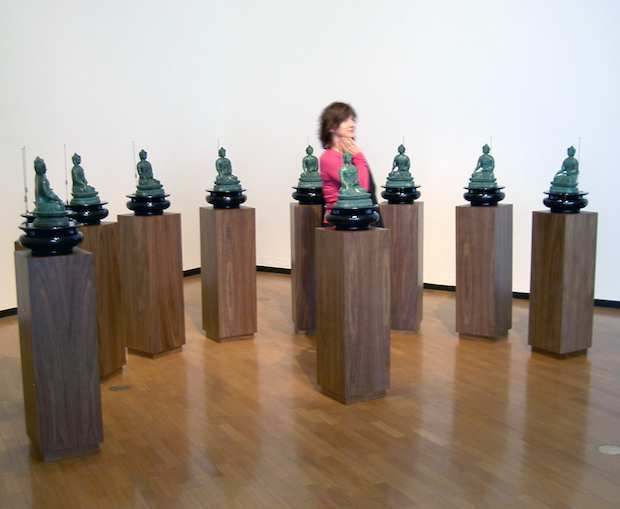 Chant at the National Gallery of Australia, Canberra, 2005. 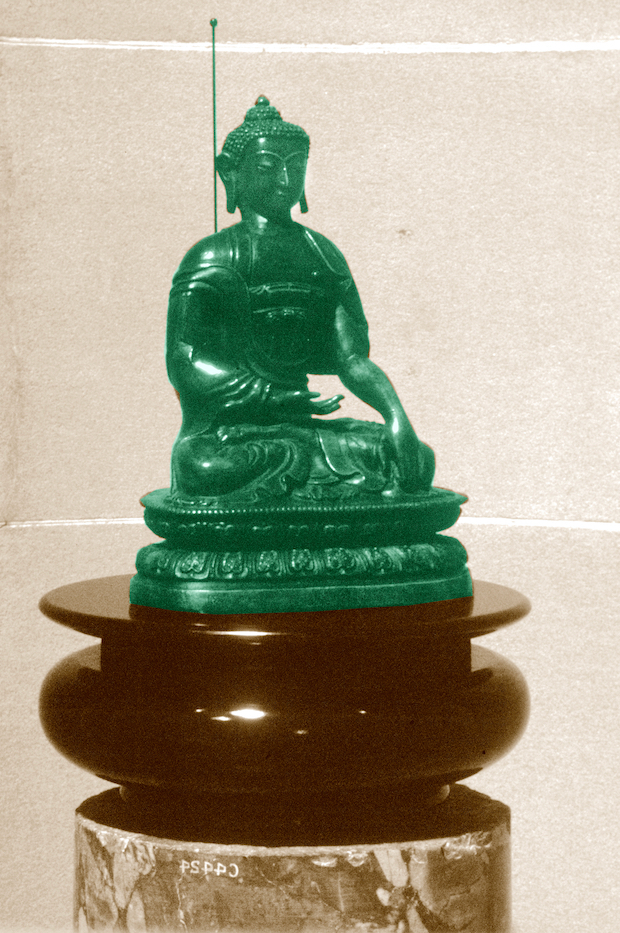 for the Buddha, Radiant Awakening exhibition. 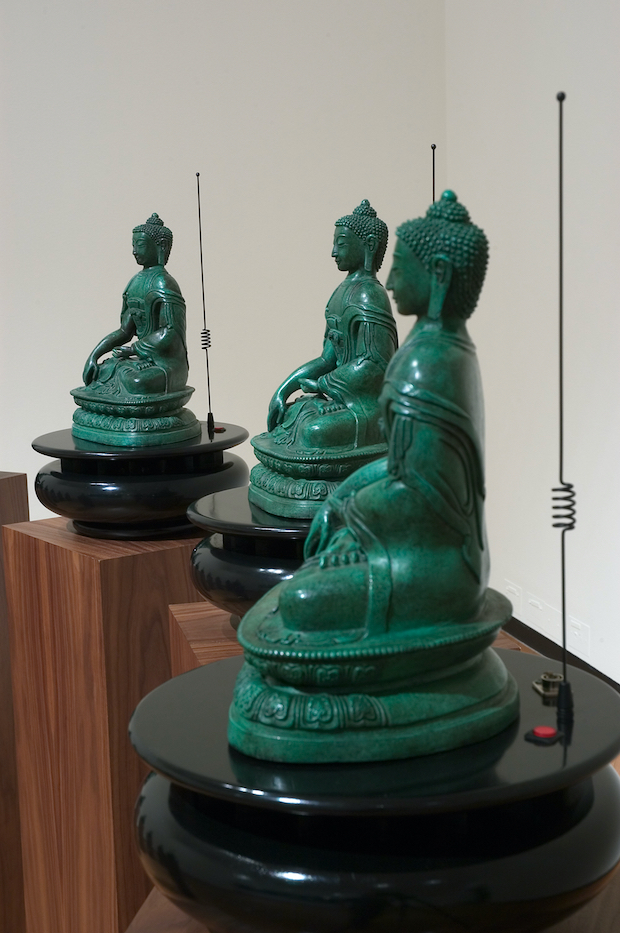 Nigel Helyers’ ‘pluri-disciplinary’ practice forms a kind of sonic-architecture – utilising space, sound and installation components to create experiential environments. In Chant, Helyer has intervened in the Art Gallery of New South Wales’ neoclassical pastiche foyer, which usually hosts a collection of early 20th sculptures arranged around the apses on either side. 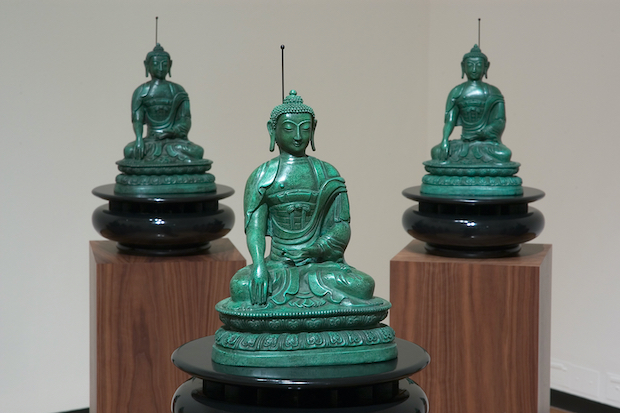 Helyer has banished these sculptures to storage and co-opted the motley assortment of antique plinths as stands for ten identical cast bronze Buddhas. The sound of chanting reverberates through the space as the Buddhas repeat the Tibetan Buddhist mantra ‘Om Mani Padme Hum’ in an endless loop and perfectly in sync. Chant effectively transforms the cool classical architecture of the Gallery from being a temple to the arts to being a temple for spiritual pursuits. 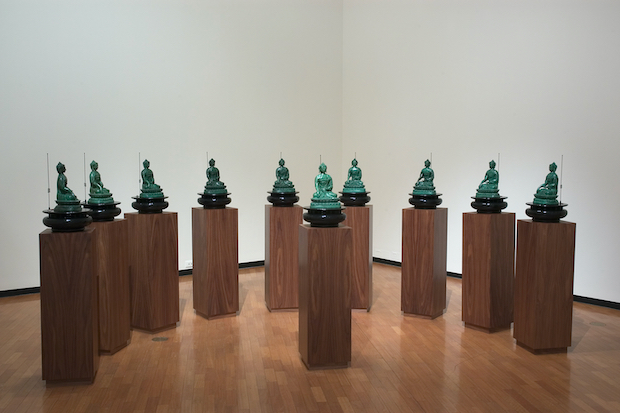 Helyer’s Buddhas are not perfect replicas of the 18th century Chinese original in the Gallery’s collection from which they are cast. With added antennae emerging from their backs, they seem to be receivers and transmitters, channelling their chant from the cosmos. ‘Om’ is Sanskrit in origin and encapsulates the Buddhist understanding of spiritual and physical cosmologies. While impossible to translate, “Behold! The jewel in the lotus!“ is often considered an equivalent phrase, suggesting the centrality of this mantra in encapsulating all of the Buddha’s teachings. 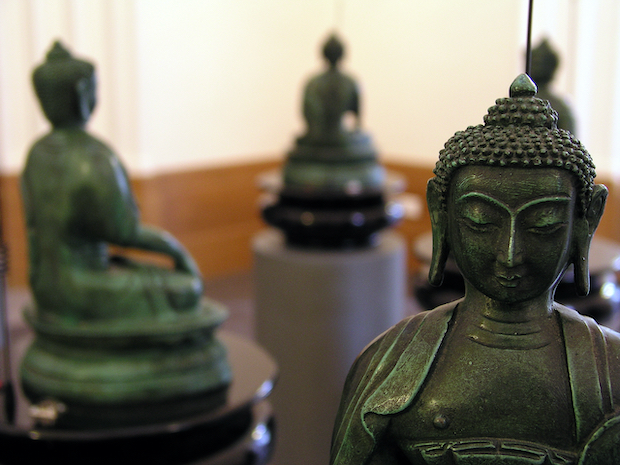 Chanting Om Mani Padme Hum enacts a circular motion of breath entering and leaving the body and thereby literally embodying the cyclical repetition and proliferation at the heart of Buddhist concepts of the universe and the nature of life. Helyer has described experiencing this work as being anointed in sound as you enter the Gallery, an act of consecration which designates the devotional nature of the artworks in the Buddha exhibition. 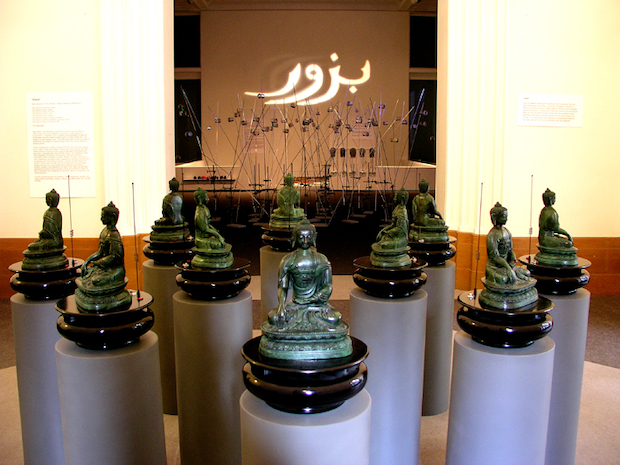 The original descriptor for “Chant”.
Chant is a site-specific sound sculpture installation designed for the AGNSW atrium (entrance lobby) area, as part of the “Buddha, Radiant Awakening” exhibition. Physically this area is acoustically very ‘bright’ due to its hard polished reflective wall surfaces and due to the parabolically shaped roof and alcove features.

Chant consists of ten identical Buddha like objects cast in bronze, designed to be placed upon the pedestals (extant) in each of the ten atrium alcoves.  Each of these bronze objects contains a small radio receiver and speaker unit, which is ‘tuned’ to a central low-power mini-fm transmitter, which broadcasts to the immediate area the classic Buddhist, chant “Om Mani Padme Hum”.

Thus, all the bronze statuettes will quietly chant the Mantra in perfect unison, forming ambient ‘sonic cloud’ as a greeting to the Gallery visitors. Chant invokes the standard Buddhist trope of repetition of iconic forms and sound motifs as a fortifying and purifying device.