You are here: Home » public art

Sounds and Sweet Airs is part of a long-term web project Soniferous Cities; Islands of Sound that experiments with the creation of sonic cartographies. The project which is part of the Öres21 Summer Exhibition aims to create rich interactive audio-portraits of a range of geographies, environments and communities. Sounds and Sweet Airs links sites on […]

The Sound of Place; Environmental Artworks at Bundanon.

This essay by Nigel Helyer and John Potts listens to the sound of place: of Bundanon, a three thousand acre property in the Shoalhaven river valley in rural NSW, Australia. Bundanon is today an artists’ colony and education centre, following the gift to the Australian people in 1993 of the entire property—including homestead, artist studio […] 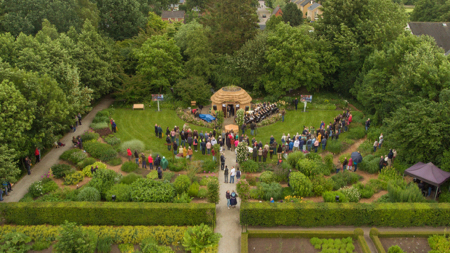 iews of the Padme Installation at MacQuarie University 2010. Padme is a solar powered digital audio floating sculpture that is activated by wave motion and by water birds nudging the antennae-like motion sensing ‘whiskers’ that radiate from the work.   A short radio interview about the installation. A favourite with the wildlife. Slight movement activated […]

Sculpture in the Vineyards

new work “Transformer” has been installed at the UnderCliff Vineyard in Wollembi alongside “Spinner” which remains in-situ from last year. y approach to the sonic domain has always been informed by a Sculptor’s perspective which emphasises the experiential nature of sounds, linking them to the dynamic, material events that produce them and situating them within […]

Ondes Ondes is a public art commission for a new Marine facility at Henderson WA. The work is comprised of three elements; an outdoor kinetic work, consisting of six counter-balanced needles which interact with the wind; a series of interactive biomorphic sculptures that react to human movement via changes in their internal lighting and a […]