Somewhat to my surprise Host has been going through manifold iterations.  Ironically the work has now been show in various forms at six international venues but has never been exhibited in Australia ~ oh well, see what you have been missing!

There are technical details on the original Host page so here is a little story to accompany some new images of Host at the science Gallery of Trinity College Dublin, Eire as part of Visceral the 10th anniversary exhibition of the SymbioticA lab UWA. 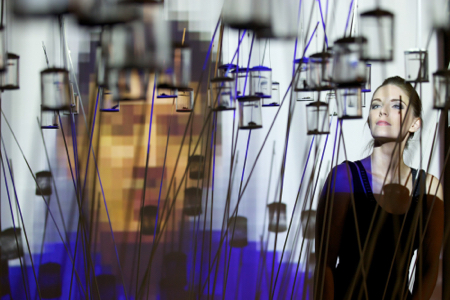 The old Professor and I are scrambling about in the bush armed with ultra-sonic bat detectors, only we are using them to track down crickets. The bat detectors down-sample high frequencies into the audible range but the Prof is slightly alarmed that I can hear the critters without the aid of the detector, mark one up for “Golden Ears” I guess! 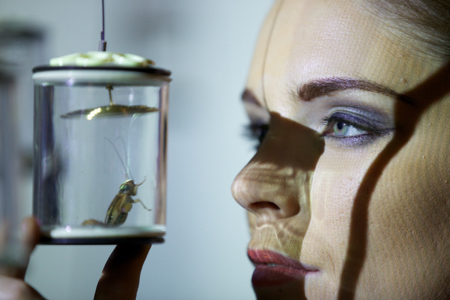 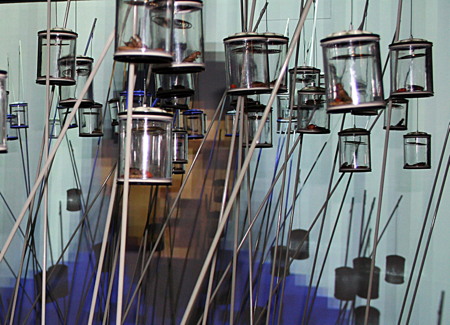 The two senior scientists tell me this is a piece of cake, in fact it was a standard lab demonstration before students got all PC and squeamish, so they are a little out of practice! It turns out to be a messy operation affixing a live ‘subject’ to the experimental stand with hot wax, the cricket is uncooperative, the scientists swear like troopers but persevere. Insects they tell me fall outside of ethics requirements as they have no feelings (do they mean souls I wonder?).

Crickets hear through their ‘elbows’ the sound traveling inside the upper forelimb to a membrane that excites nerves connected to the aural nerve centre in the thorax. This is where the first micro electrode is inserted, the circuit being completed by another in the abdomen; the cricket is hooked up to an oscilloscope and is thus transformed into a microphone!

On comes the lecture, a racy monologue concerning the exotic sexual practices of insects, hard-core fetish pales into insignificance compared with these antics. The oscilloscope flashes and pulses as the cricket’s aural nerves fire, re-set and fire again. In the lab we settle back to drink tea and listen along with our insect friend who performs diligently for four hours before expiring. At this juncture I feel more than just a twinge of remorse for this small death, notwithstanding the fact that we daily execute insects by the million (I rationalise) entire industries serve this single exterminating purpose, ensuring our hygiene and our food security.

I console myself that “Host” is something of an insect liberation project, as the 200 ~ 300 members of the live cricket audience are saved from certain doom (they are purchased from pet stores, where their destiny is to be eaten by pet amphibians and reptiles). After serving as a (captive) audience for a week, by which time they will have listened to the sex lecture some 150 times, the crickets are released and a fresh cohort installed. I only hope that in the brief time they have left they can do something useful with all that knowledge!

Like a hapless insect embroidered into the corner of a spiders web I am reversed into the corner of the tiny market stall and positioned on a small yellow plastic stool. The dealers have me where they want me, a fine exotic catch, I can only escape through negotiating the best deal possible even though I will pay through the nose! We sit smiling and sweating in the Shanghai summer, talking numbers, poking calculators and smiling again – all around a cacophony of cricket stridulations. Men are obsessively filling miniature ming dishes with cricket sized portions of gruel, transferring prized Katydids from earthenware jars to fancy carved wooden cages, or cocking an ear to a song.

Face saved all round and I walk away with some exquisitely fret-worked pocket cricket cages, a small organic transistor radio really, content in the knowledge that in China crickets have a soul!

An interview from the Science Gallery, Trinity College, Dublin, Eire.

During the installation of Visceral – while the exhibition (literally) came to life – I spoke to artist, Nigel Helyer, as he fed members of the Gryllidae family that play a key part in his Visceral exhibit, Host.

Hi Nigel, thanks for taking the time to speak with me. Tell me about Host.

Host was a piece I did with SymbioticA as part of a residency there. The piece is about our relationship with the natural world and how we tend to anthropomorphise everything. At the same time, it deals with the different levels of empathy we have with different kinds of beings – it’s much easier to empathise with animals that are like us, and that seems to be mirrored in the scientific world in terms of where ethics cuts in and cuts out. 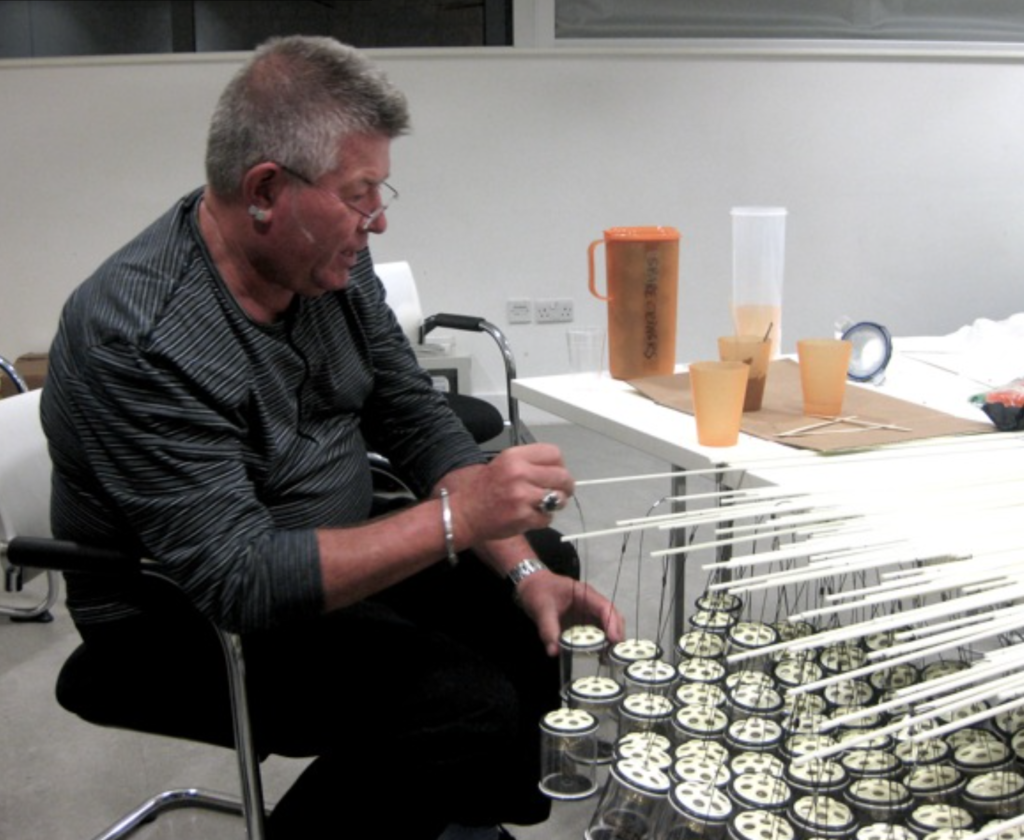 In a sense, the piece plays a little bit with that. In a physical sense, the installation has two DVD projections, which are projected through an array of insect cases with crickets inside, who are basically the audience; the human audience is outside the event. One projection is a scientific lecture on sex, in which the talking head of the scientist is heavily pixelated. The other projection is drawn from the aural nerve of a cricket, where the cricket acted as a microphone for the lecture and the electrical signals from the nerve were sent to an oscilloscope. The lecture itself talks about a vast range of insects’ sexual activities, taking you completely out of the frame of human sexuality, which is rather bland by comparison. 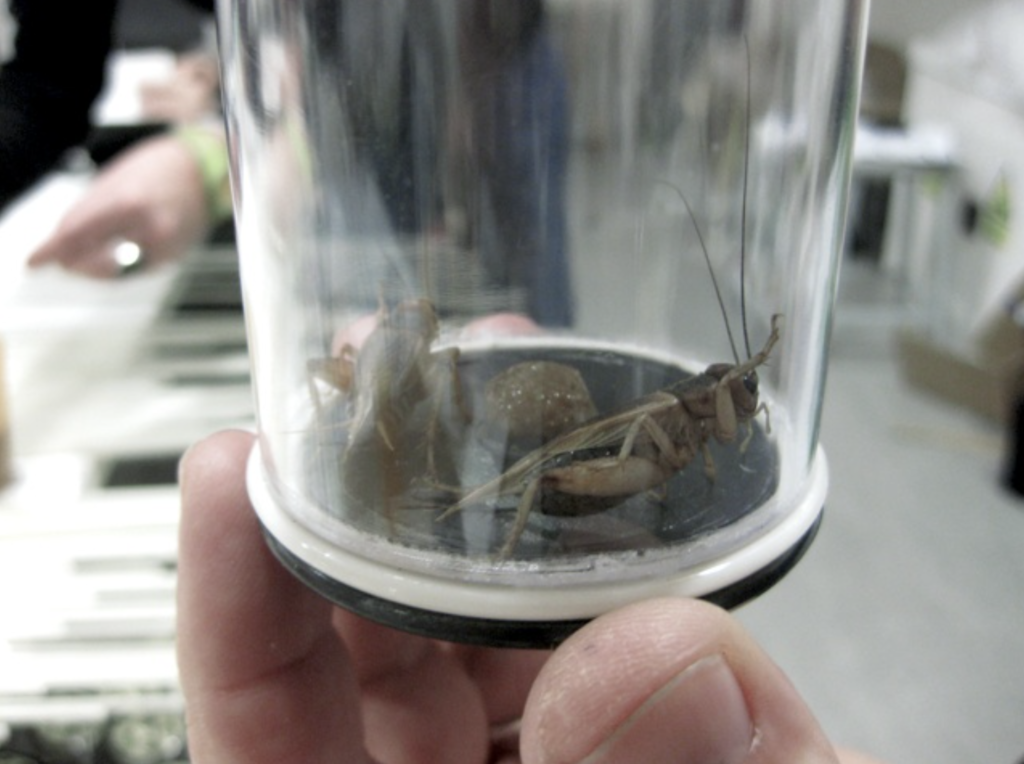 Has the idea of taking ourselves out of our human-centred perspectives been important throughout the rest of your work?

I don’t work solely with biology so it doesn’t occur constantly throughout my work, but a lot of my work involves the environment and natural history so I think it would be a theme in those cases. I’m very aware of anthropomorphism, or any dominant thought of one culture abutting another.

Stay tuned for another blog post on how the crickets from Host have been maintained and cared for during the exhibition.