Quint de Loup II was exhibited at the Tin Sheds Gallery, Faculty of Architecture, The University of Sydney. 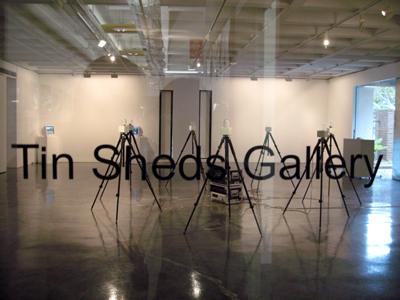 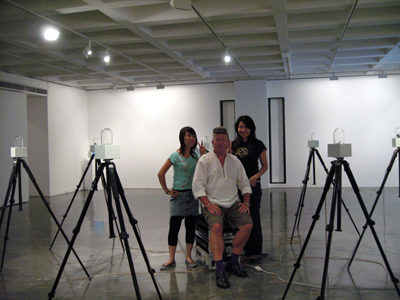 As a thirteen year old lad I was once left to kick my heels for the day in central London, along with a couple of friends.  Being both wary of getting lost in the capital and having little or no money we decided to visit the cartoon cinema that in those days was housed on the main concourse of Victoria station.  However our encounter was not, as we had imagined, with Bugs Bunny or the Invisible Man (as it was each Saturday morning) but with something indescribable and utterly alien.  I left the cinema with mixed emotions no longer an innocent, for I had seen Godard and my experience of cinema had been changed irrevocably!

Many years later (in 2003) I made a small work consisting of seven miniature reconstructions of my favourite scenes from Godard films, each mise en scène encased in a small glass dome mounted atop a camera tripod and hidden from view an induction audio system capable of interacting with hand-held ‘readers’.

The main issue at stake was how we negotiate the fictional spaces and narratives of cinema – in fact how we incorporate and ‘carry’ these fictions within us into the ‘real’ world.  During the construction of ‘One or Two Things’ I realised that I held two wildly inaccurate assumptions.

Surprise number one.
As I attempted to locate the scenes and sequences I recalled so vividly, I was to discover that they for the most part, did not actually exist in Godard’s works per se and that the images and turns of phrase I had internalised and held so dearly, were hybrid forms, embroidered, imploded and super-imposed.  This caught me totally off-guard and lead me to search repeatedly through Godard’s oeuvre in a bid to locate the fugitive sequences!

Wildly inaccurate assumption, number two.
During the process of transposing the filmic narratives into miniature sculptural dioramas a second form of slippage occurred as I realised that the discontinuous narrative that constitutes film, would only reluctantly congeal itself into a sculptural tableau.

The filmic event constructed via montage appears strangely like a Medieval ‘continuous narrative’ frieze when it is recruited as a three dimensional form.  Likewise in the sonic domain, the soundtracks were re-constituted on the Procraste’s bed of my memory and neatly sutured into place with digital surgery ~ a Voodoo of memory!

Based on subjective perceptions, and stored in the chemical and electrical mystery of a mind, memories can only offer some kind of veracity to their owner. So it is surprising how frequently we are called upon to defend memory as truth. I have always thought I had a very good memory–extensive and factual—however with increasing frequency my assumption is being shattered. Interestingly, it seems that the visual information in my recollections is not just patchy but sometimes wildly inaccurate, while the sonic material remains reasonably faithful. For example a few years ago someone gave me a CD featuring soundtracks from Pipilotti Rist videos. One piece in particular, a lilting meditative humming interspersed with cataclysmic crashes, was instantly familiar (I could sing along) and triggered my memory of the work seen over 5 years ago. Discussing it with friends I was ready to lay money on the fact that it was in black and white and Rist was walking along the street carrying a sledgehammer. In reality it is in colour and she holds a flower. It’s lucky no one took up my wager.

This re-interpretation of memories is the source of Nigel Helyer’s Two or three things. The tiny tableaux drawn from his childhood experiences of Godard films celebrate the inaccuracy of memory. The narratives are collapsed as Helyer condenses the action to frozen moments, sometimes placing figures together in scenes where in fact they never appeared. The sonic material is an elegant remix, collaging and condensing snippets of iconic score interspersed with fragments of dialogue, some sampled, some recreated. But what becomes clear is that while the sonic material contains factual (textual) errors, the atmospheres remain faithful to the originals, providing an immediate flood of memories—not only of the film, but when you saw saw it, where, who with, how you felt about them… Perhaps this is the defining characteristic of audio memories—the sonic elements hold the key to unlocking the ambience, the emotional colour of our recollections—something so experiential and subjective that it cannot be called to account.

KelleRadioActive could be seen as an antidote to the mis-rememberings of Two or three things. Created during a residency in Kellerberin, a small wheat belt town three hours out of Perth, Helyer conducted interviews with people asking them to recall their experiences of radios and early telecommunications. The recollections themselves may already be slipping, but once recorded they are preserved—the moment fixed and verifiable. While it would seem that it is the physical act of recording that contains the power of preservation, it is also the “hearing and saying”2 that allows memories to hold firm and be passed on. Unspoken memories tend to slip much faster than those that are recounted, formed into story, traded for other stories. Part of this is the speaking, but part is the hearing. When remembering a phone number, is it the number you remember (that serves no quantifiable purpose) or the sound-patterns of the words? Perhaps the tradition of learning things by heart is in fact remembering by ear.

The two works in Quint de Loup II not only offer fertile territory for contemplation of aural memories, but also illustrate Helyer’s deftness at physically manifesting his audio-explorations. Heyler’s installations always contain sophisticated yet playful audience interfaces. While tirelessly experimenting with new and old technologies, the mechanics of his works are fully integrated into the sculptural forms, providing the function of delivery while thoroughly disappearing themselves. The result is that his pieces seem to operate magically, invisible transmissions finding their way to you, selecting you as their listener.

It is this combination of the visible and invisible that truly characterises Helyer’s approach. Looking across the vast body of his work it seems that he has manifested the invisibility of audio through an astounding variety of interfaces and spaces, from meditative buddhas (Chant 2002), land mines (Seed 2002), lily ponds (Lotus 2006), or even an entire city (Siren for Port Jackson 2006). But by no means can Helyer’s work be seen as formulaic. Rather each of his pieces responds anew to the challenges of environment, function, reception and perception. Most importantly the resulting works cajole, challenge and often seduce us to listen—to our stories, our environments, our pasts, and maybe even our futures.