You are here: Home » The Wireless House 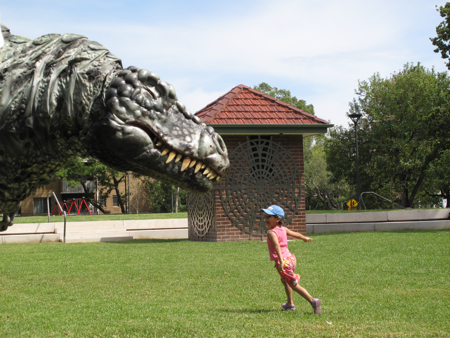 And while you are at it……listen into some audio fragments that make up the huge oral history archive that the Wireless House plays ~ a mix of archival radio and community oral history.

Perhaps vote for the ALP?

Listen to Dot talking about the Depression.

Listen to Dot talking about the Labour Party.

Listen to Dot remembering the Radio.

Or chip into Mrs Churchill’s aid to Russia appeal.

Or have a little drink!

And a little chat. 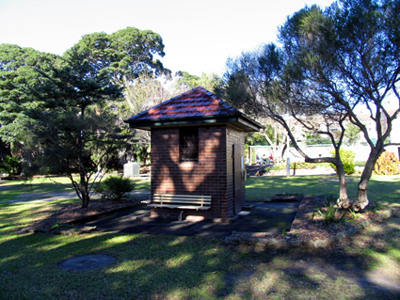 The original condition of the Wireless House.

Some information from the Glebe Society is still available online but unfortunately the really detailed oral history website we designed with the City of Sydney is no longer maintained but here a City guide to the project. 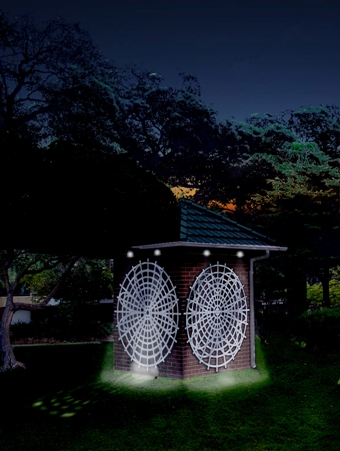 Visualisation of the ‘new’ Wireless House.

Re-Sounding the Wireless House.
Nigel Helyer and his team from Sonic Objects; Sonic Architecture are breathing life back into the Wireless House, Foley Park, Glebe by reconnecting it’s sonic history with oral histories from the community, re-kindling the original, socially minded project of the Glebe Council. 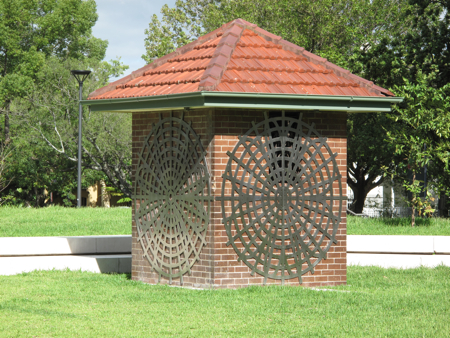 Some history.
In 1933 a suggestion was put to the Council to establish a Wireless House in the public rest park on the corner of Glebe Point and Bridge Roads for the purpose of community entertainment. Commissioned in November of 1934, Wireless#House was onficially opened in Febr}ary the fgldowing yeaz with a wireless set donated by Grace Brothers. The Wireless House operated from 10am until 10.15pm on a daily basis. 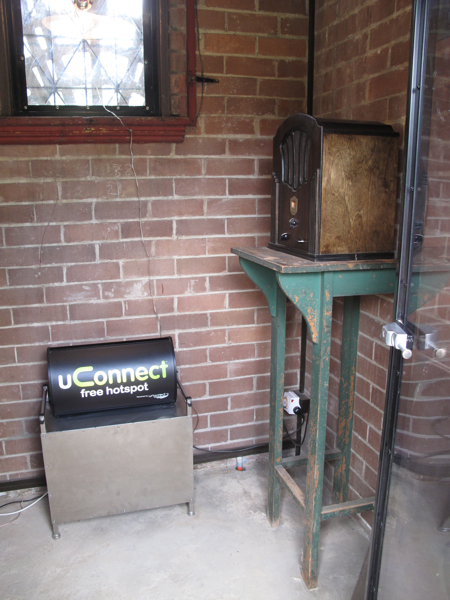 Radio broadcast was making considerable changes to Australian society during this time and as a domestic social event, entire family groups would gather around a radio set for communal listening, even taking turns wearing headphones and narrating the events to the rest of the group. However during the depression access to radio equipment was restricted to those of comfortable means. 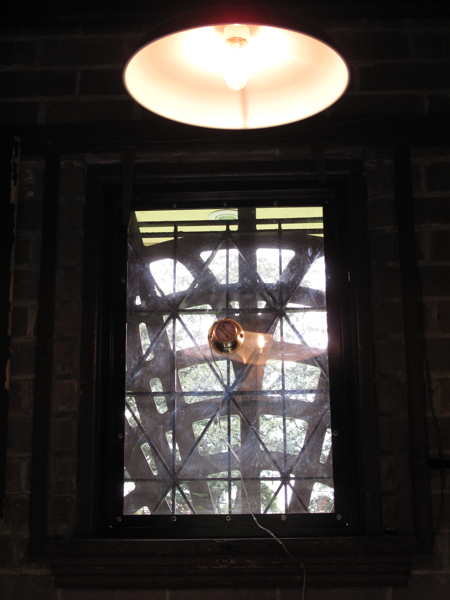 The Wireless House was revolutionary in that it catered to large crowds including many unemployed, who congregated to enjoy the daily programmes. The initiative, although hailed as unique in Australian municipal history, attracted criticism from the church and sporting organisations both sharing concerns about a loss of patronage. The Wireless House eventually succumbed to accusations that it encouraged the unemployed to idleness and was subsequently de-commissioned.  Our original research pointed to a closure date in the early 1950’s but we have subsequently discovered that the ‘House’ operated at reduced volume until the early 1970’s. 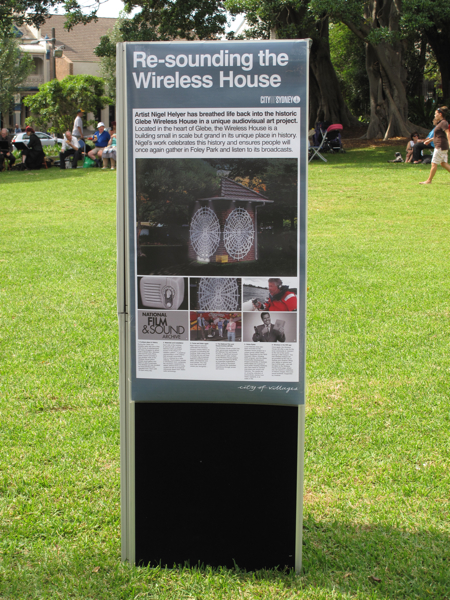 The intervening decades have wrought extraordinary changes in our attitudes to and acceptance of broadcast media and the fact that the Wireless House has survived intact, albeit mute, for over forty years is equally extraordinary.

Helyer acknowledges the Wireless House building, while lacking in architectural charm has a unique historical and cultural merit that transcends it’s local context, identifying it as a rare example of social and cultural provision at a national and potentially international level and therefore should be retained and honored. The creative treatment given to the Wireless House brings both the physical structure and its audio capacity firmly into the contemporary realm. 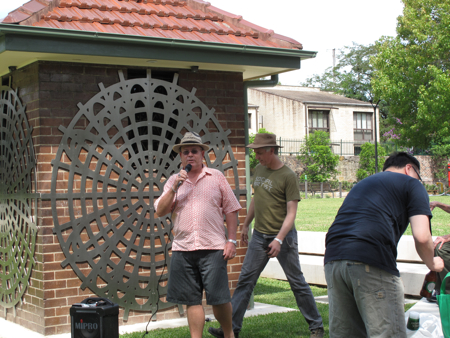 Each of the four sides of the building have been adorned with unique stainless steel perforated screens in the form of a antennae radiation patterns – a graphical representation of the relative field strength transmitted from or received by a radio antenna.  The original blank steel door has been removed and replaced with a transparent lexan panel as have the blind speaker apertures, the lit interior now reveals a refurbished room containing the necessary equipment to deliver various forms of audio content as well as sculptural references drawn from 1930’s radio technology – valves, antennae harnesses and a vintage radio.

Re_Sounding.
To re-establish the original function of the Wireless House and its capacity to play audio over a small area of Foley Park, the team from Sonic Objects; Sonic Architecture have utilised a range of current media technologies to deliver audio content.

The Wireless house automatically detects visitors and selects audio sequences from a large data-base of archival and community oral history material, playing them at a modest level.  The Wireless House will also operate as an internet hot-spot giving free internet and email access to visitors to the park, as well as providing a comprehensive website featuring Oral histories, and archival sound materials.

A significant proportion of the content for the Wireless House project comes directly from from the establishment of a Glebe local oral history project which aims to generate an Audio Portrait of the community. Julia Burns has also engaged deeply with community members not only recording Oral Histories but training and facilitating Glebe local in digital audio and video technology so that they can take control of the production and publication of their own stories.

Helyer has worked in this way before ~ a good example can be seen in Woolloomooloo Bay created as part of the 1999/2000 City of Sydney Sculpture Walk. Called Dual Nature, it is solar powered sculptural work delivering a constantly changing mix of oral history material, either recorded in the area, discovered in archives or recreated from historical documents. The work quietly announces its memories to visitors.

The Glebe oral history project will be an ongoing feature of the Wireless House, contributing to a growing database of audio material that the re-invigorated Wireless House will transmit in a variety of formats. As with Dual Nature, historical materials selected from existing media archives and text based archives read by voice actors will create an additional layer of historical context.

A selection of the many video interviews that contributed to the project.

Nigel Helyer at the opening of the Wireless House

Tony and Frank Galluzzo – Drunk under the Tram

And finally here is the original competition proposal. 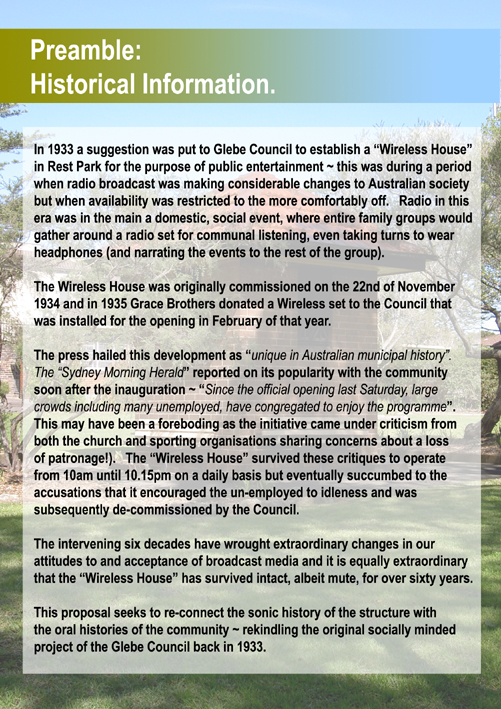 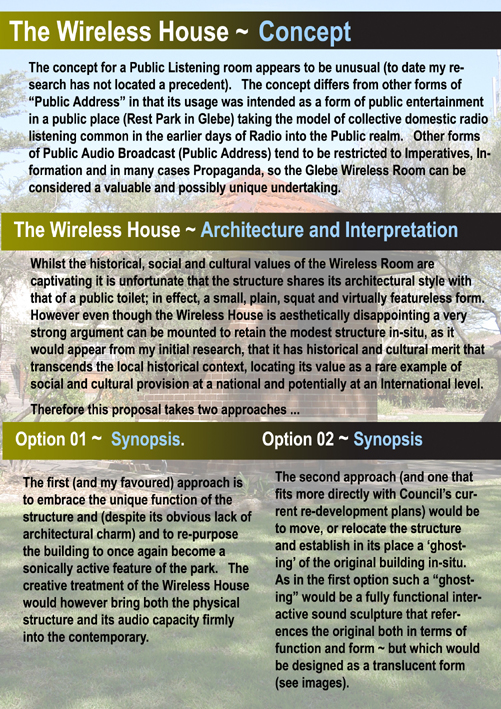 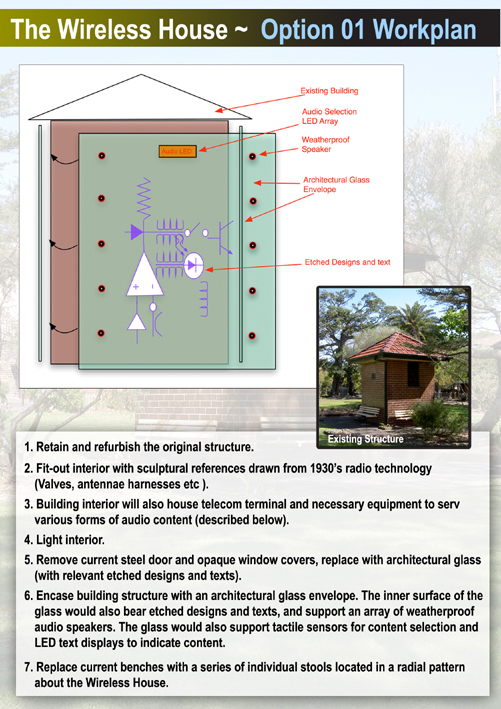 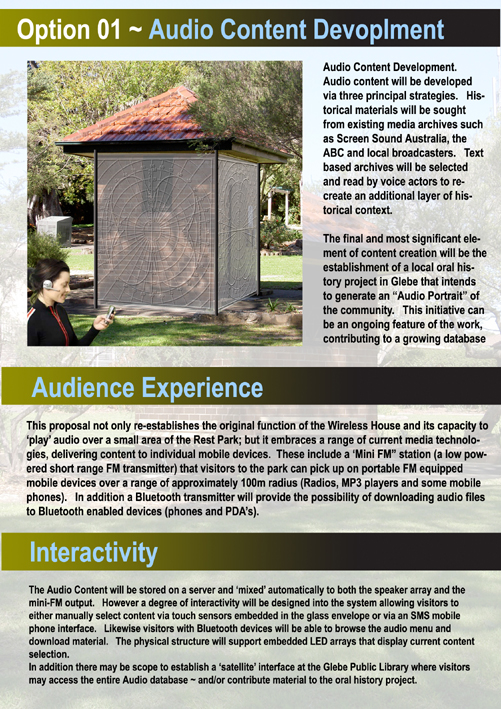 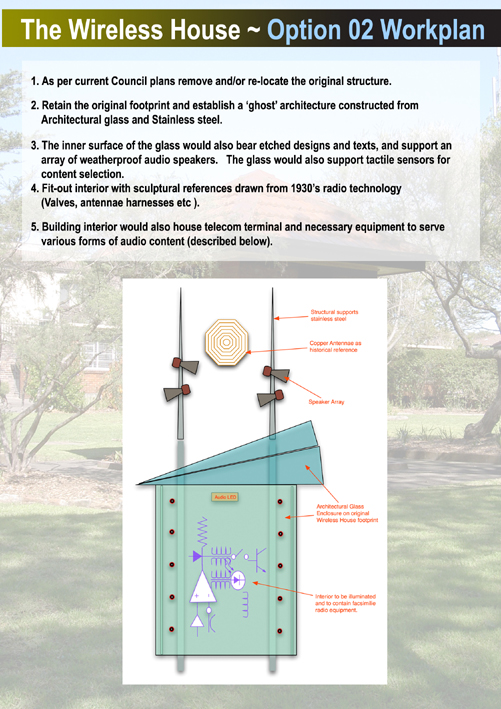 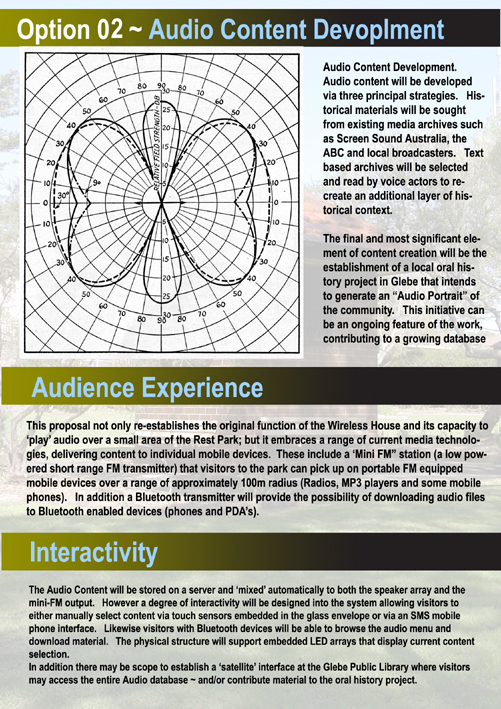 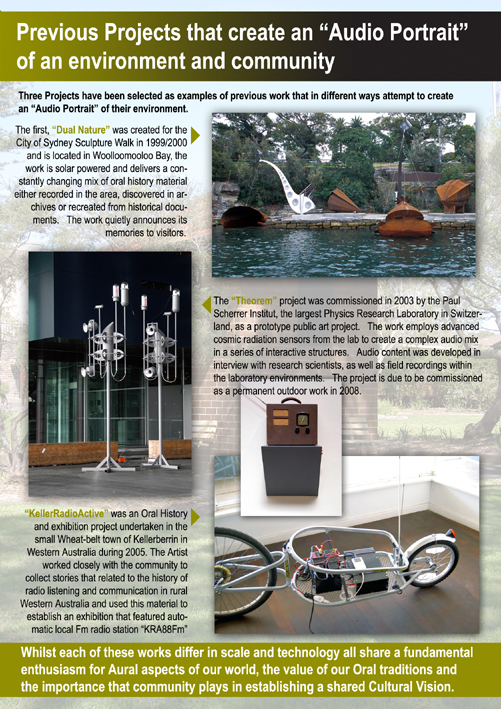