You are here: Home » Theorem

Between June 2004 and February 2005 Nigel Helyer worked as an Artist in Residence at the Paul Scherrer Institut, one of Switzerland’s largest research laboratories.  The Following is extracted from the Institut publication ‘Aktuell’. 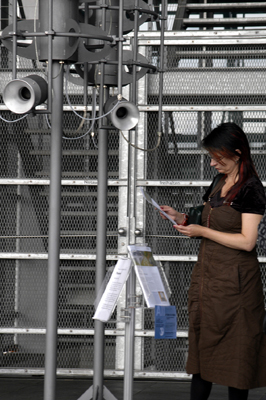 How might an Artist approach the Paul Scherrer Institut, which by any standards, is a complex intellectual and social organism?  My strategy, simplistic though it may seem, has been to imagine PSI as eco-system, or more specifically, from my Sound Sculptor’s perspective, as an acoustic-ecology.  My principal task being how to get under the skin of the life of PSI and create a work that will encapsulate aspects of PSI in the form of an abstract ‘audio-portrait’, whilst simultaneously employing some of the Lab’s technology and expertise. The “Theorem” project is conceived as an ensemble of individual audio producing sculptures with acoustic behaviours that are modelled upon the subtle balance of order and chaos found in the natural environment.  In a natural setting we are surrounded by multiple discreet sound sources, belonging to a variety of acoustic types (for example bird song, insect noise etc) but most of which share some type of collective or community behaviour (for example call and response in bird song and excitation behaviour in insect communities).

“Theorem” will be based upon a modular design in which an array of 30 to 40 audio units, form a complex interactive ‘ensemble’.  A Cosmic Muon, detection device, will trigger each unit and variations in the detection rate will be employed to select from a palette of audio files, ensuring a complex ‘composition’ across the array.  Further interactive complexity will be supplied by human proximity detection and acoustic detection.

Each of the “Theorem” units will carry a large but identical cache of audio files organised into several play-lists, or families of sounds.  Each play-list will contain songs (individual audio files) that are intentionally designed to have different durations and which, combined with the wide variety of form and texture of play-list content, will ensure a rich complexity and contrast in the overall soundscape. 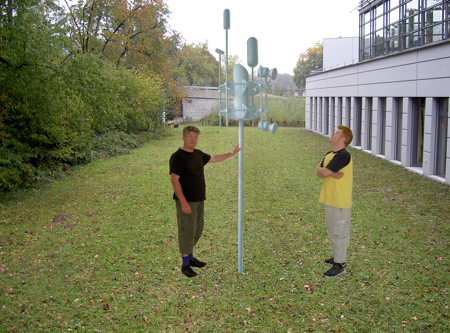 The Sound Design of “Theorem” is intended to render an abstract portrait of the PSI Laboratories and its Scientific Community.  Material is drawn from a variety of sources, which include recordings of Laboratory atmospheres and ambiences, employing conventional microphony, Electro Magnetic recording and Vibration recording.

I have also been conducting brief recorded interviews with the Scientific Staff of PSI who have been asked to outline their concepts of elegance and beauty within the scientific paradigm and to pronounce an example of an elegant equation.  These sounds of the internal life of PSI will be accompanied by content collected from the wider physical rural environment in which the PSI Laboratory is located, including a tonal palette of Cowbells etc.

Physically the multiple units of the ensemble will consist of a grouping of slender masts with lateral branches supporting ‘pods’ that contain the various technical elements of the work (Muon detector, Audio storage and playback, amplifiers and speakers etc). The masts will also carry an array of small but high intensity LED lights at their tip which will be linked to the Muon detection rate and to the audio file selection – giving a visual cue to the operational status of each unit and thus the ensemble as a whole.