You are here: Home » Sonic Landscapes

From June 1999 until September 2001 Nigel Helyer worked as an Artist in Residence at Lake Technology in Sydney, http://www.lake.com developing the Sonic Landscapes Virtual Audio Reality system. The project was funded for the first twelve months by the New Media Board of the Australia Council for the Arts under its Art and Industry partnerships category.

The salient feature of the Sonic Landscapes project waqs the juxtaposition of a fictive (but very convincing) 3D immersive soundscape, accurately positioned by cartographic software, upon a physical terrain.

The effect being akin to Murray Schafer’s concept of ‘Schitzophonia’, where, by the simple act of recording, sound is split from its original physical context and projected into another context. However within a Sonic Landscapes experience we are not simply dealing with the disembodied voices of popular music reproduced and re-contextualised via a stereo system! Here we are engaging with a seemingly live sonic organism that is responsive to our presence, our orientation and the traces of our wanderings, and which appears un-cannily embedded in the site itself.

The prototype Sonic Landscapes Unit was capable of operating with a 2cm positional accuracy when employing differential GPS (Global Satellite Positioning) and with a one degree accuracy for rotational head orientation, which, when combined with Lake’s headphone delivered virtual speaker array provided a highly realistic immersive audio environment

The Tracking technology for the Sonic Landscapes project was provided throughout by the SNAP Lab of the University of New South Wales under the guidance of Professor Chris Rizos.

The choice of a prototype test site for the project was St Stephens graveyard in Newtown; one of Sydney’s oldest burial grounds, which provided an ideal pedestrian environment, rich in historical material and interesting physical structures.

The Sonic Landscapes project has now evolved into now in a second phase of collaborative development between Sonic Objects and UNSW forming the AudioNomad research team co-funded by the Australia Council for the Arts and the Australian Research Council.  The AudioNomad R+D team are developing a range of location sensitive mobile immersive audio experiences. 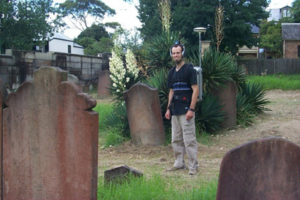