otus is a commission for an environmental audio sculpture that is moored in the lake at ECU’s Joondalup campus. Left – Visualisation image, right – Lotus on-site and talking poetry. “Lotus” is a development of my previous solar powered environmental audio works and is directly based upon the functional components of “Haiku” but here deployed […]

KelleRadioActive ~ IASKA (October ~ December 2005). he history of broadcast media and communications technology have developed at an alarming pace over the last century and it is easy to forget the central role that radio has played in rural Australian communities, both as a form of entertainment and as a vital link. One of […]

Monsanto may have stolen the Native Medicines Novalis may own your cell-line and Microsoft may have locked up all the picture archives. But we’ve got your number! Visit Magnus Opus

Preaching to the Converter

on August 15, 2005in Projectstags: installation 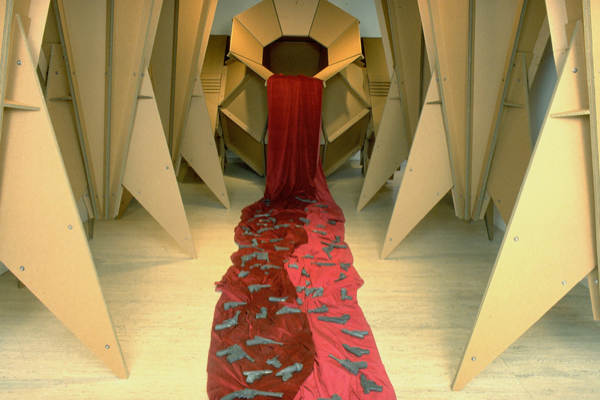 xhibited at the Art Gallery of NSW during Perspecta 1985 Preaching to the Converter combined Triwall Cardboard, Velvet and Cast Iron in a seven metre flow across the Museum floor. stage set of gigantic proportions, or rather a normal room viewed from the prespective of a child.  Castles and reverbatory furnaces, a liquid river of […]

on August 3, 2005in Projectstags: models

h, it now seems a luxury to have had the time to play around with cardboard and glue, making miniature structures! Model for Mute in Talk Town.

he Audio Nomad project is an exciting development in Australian Research and Development that combines the skills and talents of Artists with those of Scientists in an imaginative collaboration that is developing technologies to support and deliver creative public sound-art events.  Our specific interests are in location sensitive, mobile audio systems that generate immersive sound […]