The outstretched palm, that of the Buddha etched with the precious objects, of Islam warding off evil;  of Christ before Golgotha, of a Toureg woman tattooed in cyphers or a simple punctum ~ Stop!  The mind works too fast for logic, it sifts, sorts and assembles metaphors, associations and gestalts, this hand I had seen it before, this route map of homo faber.  The blind guitarist is leaning against a lime washed wall, his eyes rolled back looking at a universe just above the horizon, a universe that you and I cannot see.  He is seated on a small wooden stool and has before him his hat with a few coins and notes of small denomination, his voice is worn and his guitar likewise.

Behind him on the wall is a large painted hand, palm outstretched, marked in lines and diagrams, it announces a hole-in-the-wall enterprise, a psychic, a healer perhaps or most likely in these parts, a shaman ~ the guitarist starts to sing again.

TThere, the image is fixed, assigned to a place, a time and a sonic memory, torn from its original context, whatever it may have been and fused to another destiny. 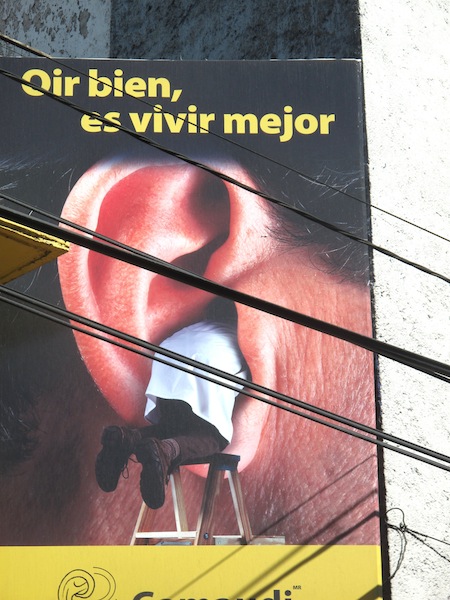 There is a strong, but largely unacknowledged, relationship between sound, site and memory, both personal and cultural, that allows us to form complex associations and communal identities with particular loci.  This idea is embedded in our language and in part stems from the classical concept of the Theatre of Memory, an antique technique that enabled Orators to place memory objects, such as lengthy quotations, within the labyrinthine spaces of classical architecture.  By visualising an architectural interior, real or imaginary, the speaker might take a virtual walk, placing here a red cloak over a sculpture to recall a passage of oration and there, a sword on a table as a mnemonic trigger to locate yet another verse. By memorising a stroll through this virtual architecture, an Orator could retrieve a vast amount of correctly sequenced rhetoric.

Your words are preserved in the tin foil and will come back upon the application of the instrument years after you are dead in exactly the same tone of voice you spoke in then…..This tongueless, toothless instrument, without larynx or pharynx, dumb, voiceless matter, nevertheless mimics your tones, speaks with your voice, speaks with your words, and centuries after you have crumbled into dust will repeat again and again, to a generation that could never know you, every idle thought, every fond fancy, every vain word that you chose to whisper against this thin iron diaphragm.

Broadcast media, recording and communications technologies have developed at an alarming pace since Edison proposed the phonograph as an Acoustic Ars Memoria.  A series of rapid iterations have overlaid and overwritten previous systems and modus operandi making it easy to forget the central role that radio has played within Global communities ~ both rural and urban. The broadcast medium has functioned as a form of entertainment, a mechanism for nation building and as a vital link able to transcend the tyranny of distance be it real or imagined.

Listen to the ORF Kunstradio Broadcast commissioned by Frequency Oz.

My interest is focussed, not so much upon a technological trajectory but primarily upon the role that listening plays in establishing memory, situated within a geophysical site, to form identity and place. The corollary of this interest also lies in its inverse, the realisation that individual memory, as well as cultural histories, are extremely fragile and fugitive, evaporating under the pressures of technological and social change driven by the massive acceleration and saturation of media information.

Over the past few years I have become increasingly drawn to create a series of audio-portraits, manifest as sound installations, public sound works and radio broadcasts, woven from the patterns of listening and communication.  These audio-portraits centre upon the nexus of sound, listening, location and memory, fusing the concept of soundscape with more narrative forms of orality and embracing community and environment as a lived location.

Ars Memoriae Mexicana is the result of an Audio-Journey through Mexico in which these questions of location, memory and identity were very much in my daily thoughts as I traveled through a landscape saturated in sound, music and voices.

In the recording you listen to the voices of :- the sound artist Charlie Fox as he claps rhythmically, facing the steps of an Aztec Pyramid; the film maker Mike Buckley sitting on a balmy evening surrounded by crickets; acoustic ecologist Hildegard Westercamp talking in the garden of the villa once owned by Octavia Paz; the artist Juan Gonzales de Leon recalling a childhood walk in the alien landscape of a Primrose Hill park in London; the journalist Miriam recounting her favourite Mexico City sounds.

These voices float in a bed of ambient environmental sounds and street-scapes that for the most part I have chosen not to edit or sanitise, preferring to leave in the noise, the glitches and the occasional less than perfect recording ~ that’s the way the world sounds and Hollywood is a long way away both geographically but especially philosophically!

This project was commissioned by Frequency Oz as part of the Transmuted Signal series for ORF Kundstradio, Austria. 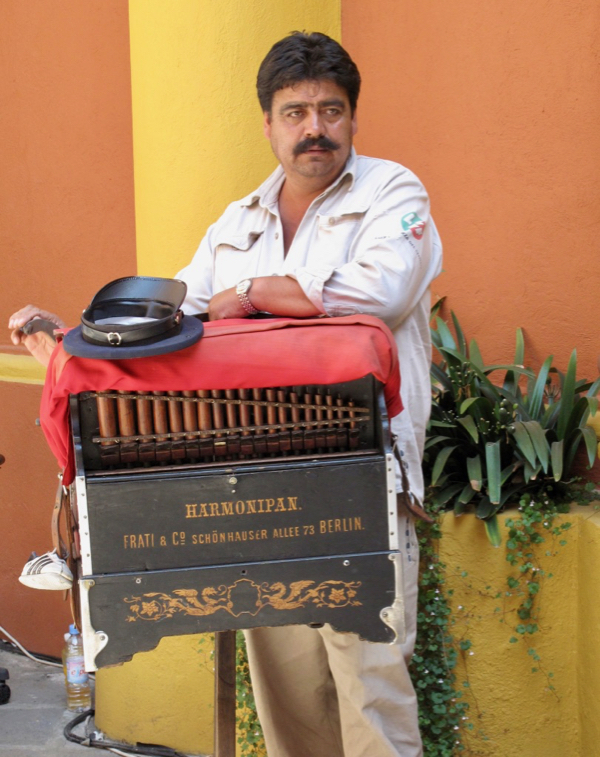