You are here: Home » Weeping Willow

Weeping Willow is a twelve channel audio sculpture currently on exhibition in Istanbul as part of ISEA 2011 ~ and here is a link to my individual page.

The work is presented as an interactive audio sculpture in the form of a dinner table set with twelve Willow Pattern plates. Each plate is treated to show only a fragment of the original pattern, in such a manner that the entire set combines to form the complete image.  In turn each plate is mounted on a Solid Drive audio actuator rendering it in effect as a speaker allowing the dinner setting to manifest a multichannel, fragmentary audio narrative. 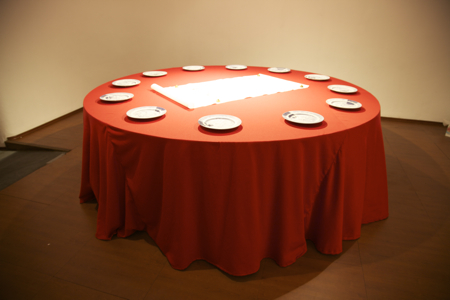 “And truly a trip on this Lake is a much more charming recreation than can be enjoyed on land. For on the one side lies the city in its entire length, so that the spectators in the barges, from the distance at which they stand, take in the whole prospect in its full beauty and grandeur, with its numberless palaces, temples, monasteries, and gardens, full of lofty trees, sloping to the shore.

And the Lake is never without a number of other such boats, laden with pleasure parties; for it is the great delight of the citizens here, after they have disposed of the day’s business, to pass the afternoon in enjoyment with the ladies of their families, or perhaps with others less reputable, either in these barges or in driving about the city in carriages.” 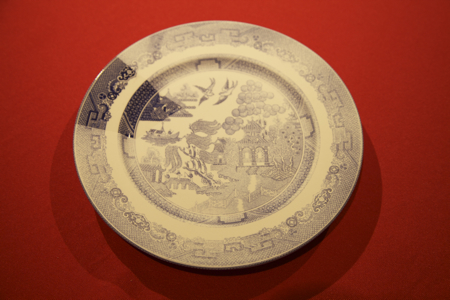 Each plate has an individual glaze fragment.

The Weeping Willow project addresses the cultural and ideological relationship between two Empires, Britannia and Cathay (China) both of which regarded themselves as the hub of the Universe. Eurocentrism demands that the Orient play a secondary role in the Arts and Sciences, obscuring the real source of much Occidental Ars et Inventio by relegating the Orient to the source of exotica, myth and superstition. 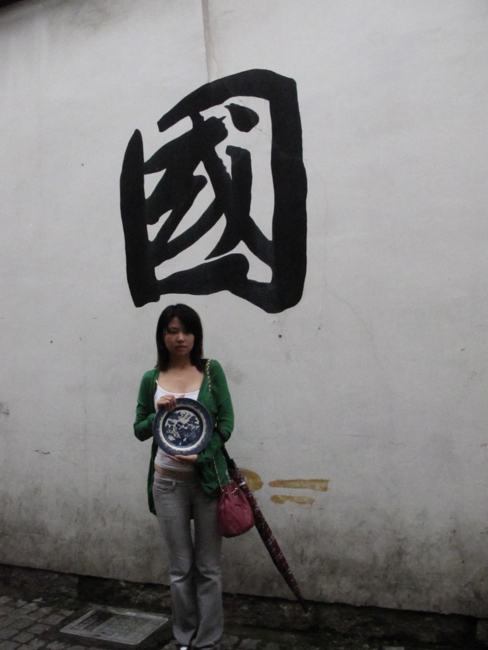 Yang Ping the project assistant and interpreter in HangZhou 2010. 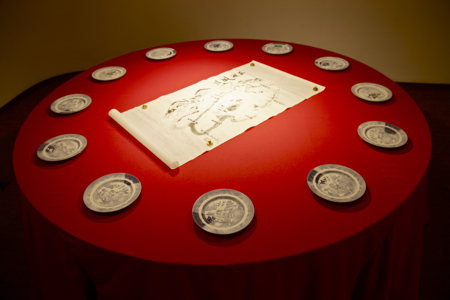 View of the calligraphic map of the West Lake in HangZhou.

Underpinned by a long history of trade routes and sea-lanes the two imperial centres engaged in a curious but problematic dialogue which ended ultimately in the Opium wars and semi-colonisation by European powers in the mid nineteenth century, establishing an axis of power which we are only now seeing reversed! 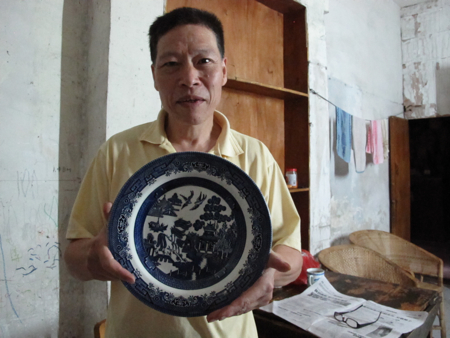 HangZhou resident who contributed a poem to the soundscape.

European commercial interests were matched at every turn by a fascination with Eastern Arts and Culture, the complexity and historical depth of which predated and overshadowed that of Europe.  Textile and Ceramic wares in particular formed the basis for huge trade, carrying with it a range of iconography which shuffled across the cultural divide, to eventually hybridise in both the Occident and the Orient. 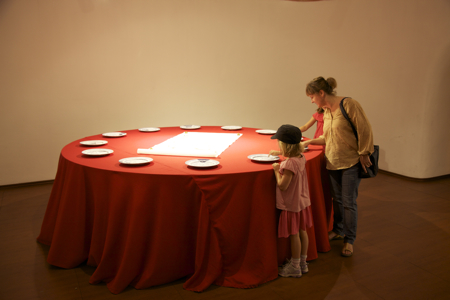 Weeping Willow in the Gallery at Taksim, Istanbul.

The Blue Willow, or Willow Pattern ceramic design is a perfect example of this process and forms the basis for the current work Weeping Willow. Blue Willow was designed by Minton, an Englishman and the design was initially produced by the Spode pottery in Staffordshire. The design is based upon the longstanding tradition of Ming porcelain blue-ware, with specific imagery drawn from the lakes and gardens in HangZhou, notably the West Lake which has a deep-rooted and popular place in Chinese cultural history and which is well documented in the Travels of Marco Polo. 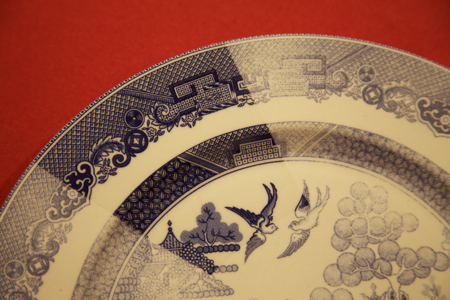 Detail of the glaze ‘fragment.’ 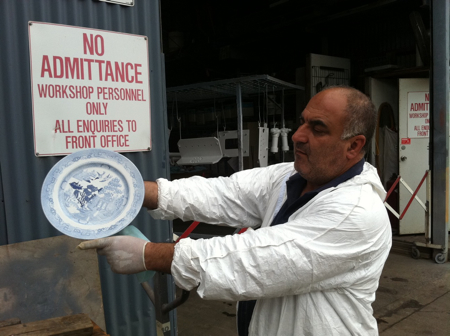 John the Sandblaster in Wollongong.

The European image proposes a narrative, reputed to be based upon a traditional Chinese tale of unrequited love, very much in the vein of Romeo and Juliette but is in fact essentially a European fiction, which only loosely follows a much more interesting mythic tale relating a love story between white and blue snake deities. 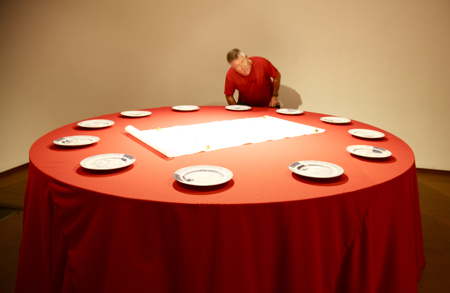 The vagaries of Orientalism aside, to judge from the ubiquity of the design Blue Willow is possibly the most widespread example of Chinoiserie ever produced, with production quickly being taken up in China and Japan as exports to Europe reversing the original orientalist trend.  Even today Wedgewood’s Blue Willow plates are manufactured in China by workers to whom the pattern is apparently without meaning. 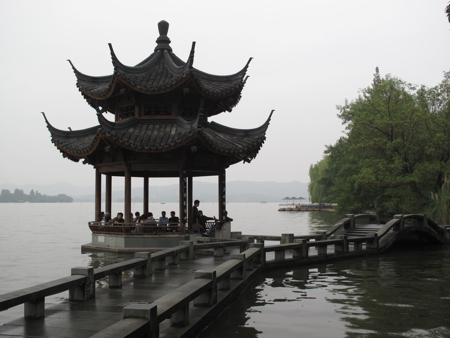 The current Weeping Willow project explores the vestiges of cultural memory invested in the design by asking locals in the Hangzhou area to identify and describe the stories embedded in the Blue Willow plate. These narratives are combined with narrations of the original love stories, both traditional and European (with translations undertaken in studio) and in turn mixed with early European accounts of China (for example Marco Polo’s descriptions of exotic life in HangZhou, which he identifies as Kinsay). 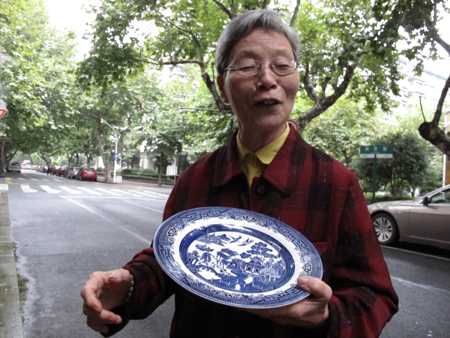 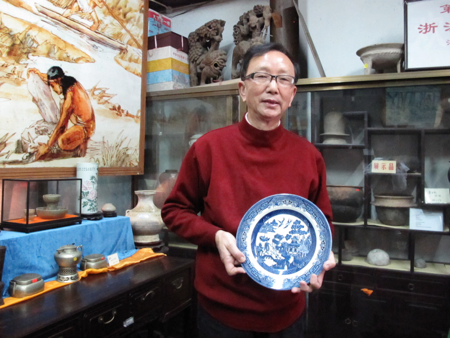 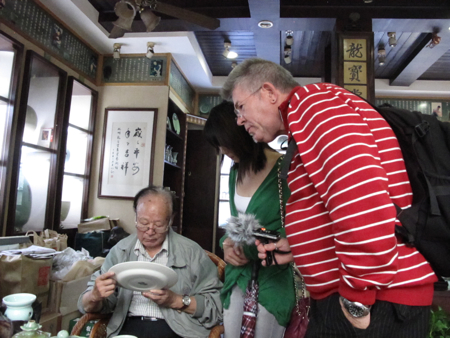 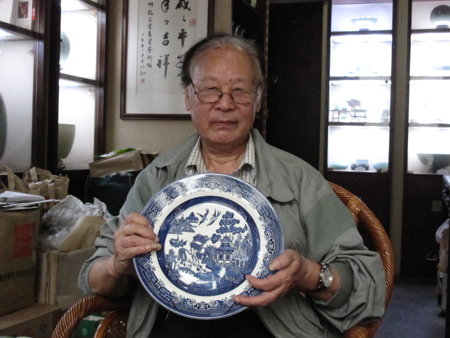 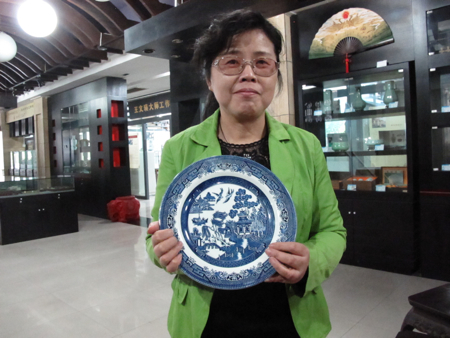