You are here: Home » Drift

“Drift” was commissioned by Hull Time Based Arts of Hull, UK for TooT (Totally out of Tune) festival 1999.

Notes.
The work “Drift” is a dynamic 3 D spatialised soundwork installed in the fish hold of the “Artic Corsair” the last remaining Humberside sidewinder trawler now moored, as a museum ship, in Hull (Yorkshire, UK).

The Artic Corsair docked in Hull.

The soundscape is designed to work directly with both the physical environment and the historical context. The soundscape, which is of 30 minutes duration loops automatically presenting a seamless ambience formed of several ‘layers’ of audio material.

The work is structured to avoid a strict linear composition – so that visitors may choose to pass through the sound-space (the ship’s fish hold) at their own pace, remaining to experience a full programme cycle – or simply sampling sections of the work. 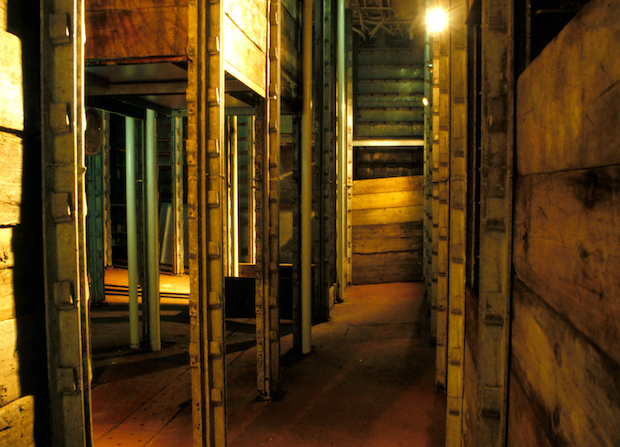 The fish-hold with x8 channels of dynamic 3D audio and x2 channels in the Ark.

The soundscape is projected by three types of speaker arrays; the principal matrix of x8 speakers delivers the dynamic spatialised audio – immersing and surrounding the visitor with sounds derived from the Ocean, from Fish, the Fishing and Fish processing Industry.

Four ‘sub-woofer units mounted in pairs at either end of the longitudinal axis of the hold project a panning low frequency wave-surge.

Finally two small voice coils, housed in a central sculptural vessel in the form of an Ark, recount the English vernacular names, counterpointed by the Latin Classifications, of fish from Australian waters – i.e. all fish which the “Artic Corsair” would never have netted. 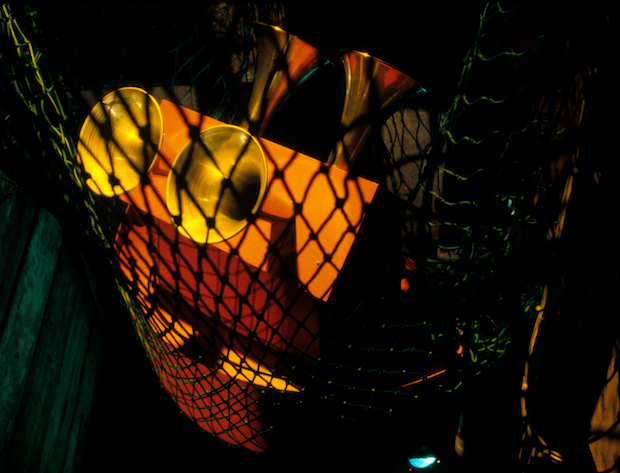 Drift is what the Ark did – aimlessly and noiselessly (as long as you disregard the menagerie!). Drift in French is Dérive, which is what members of the Situationist Internationale liked to do as a form of higher-order pastime (requiring about four days and large quantities of high-octane alcohol). In both cases eventually you get washed up somewhere, tired, damp but still alive!

What Noah forgot I guess was Fish – I don’t think there were fish on the Ark; maybe this means fish are free of guilt (which is perhaps why they are so good to eat!). So in a Jonah(esque) trope the Arctic Corsair has netted an Ark (a fish free cosmos) but one which constantly intones all those species of fish that never swam under the keel of the Arctic Corsair – all the warm vernacular fish names from my new Antipodean homeland. 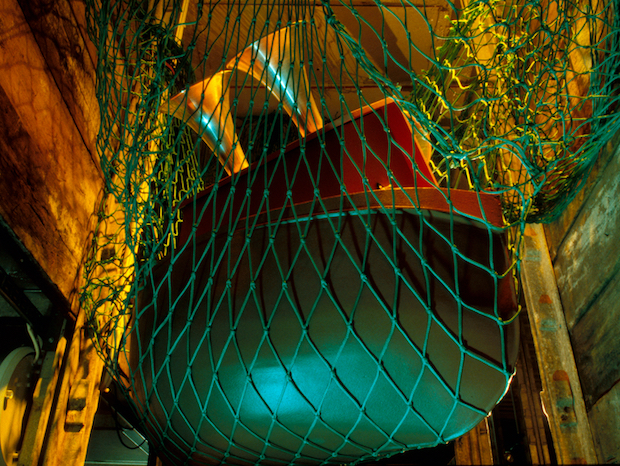 In the old homeland my family were said to have migrated from northern Germany as fisherfolk and run a small fleet somewhere on the northeast coast. My father’s back a Palimpsest of shipyard labour. His skin punctuated with small, Lunar white scars – a Tyneside riveter’s coat-of-arms. My father’s voice a soft Gordie croon with a lullabye about Shrimp Boats coming home, guaranteed to put me to sleep in the cot.
So it seems my fate is co-mingled with salt water, as it is professionally with sound. Both are liquid mediums, both immerse and surround us – and naturally, we can drown in both! 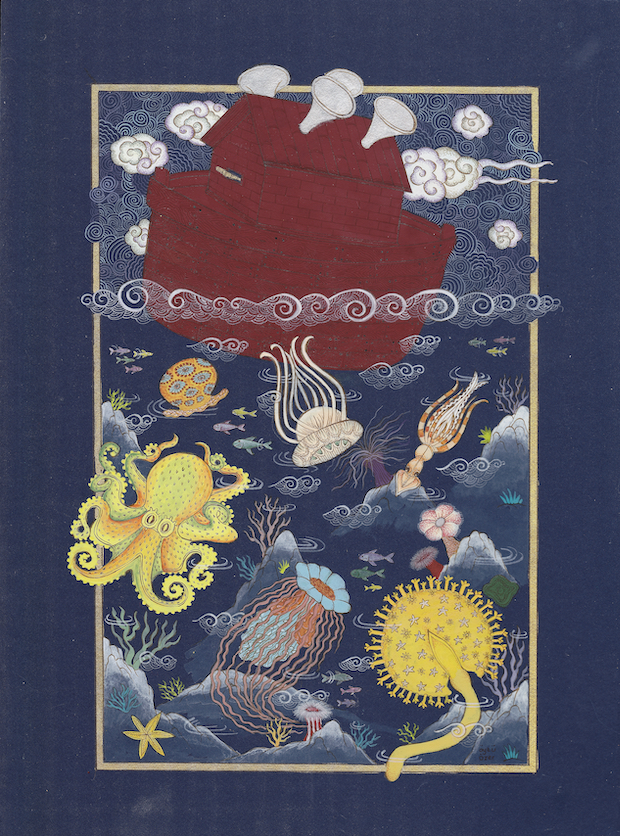 An illustration from the Deluge Ark(ive) novel.

Serendipity; on my first day aboard the “Artic Corsair” I came across this poem, posted on a bulkhead;

I guess salt is in the blood.